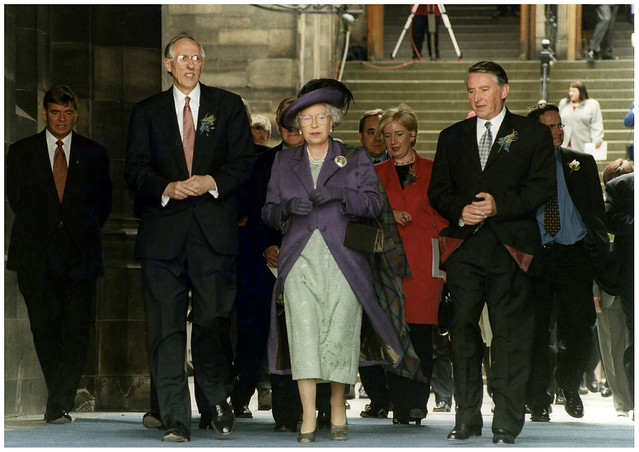 Two decades after the Scottish Parliament was reconvened, CommonSpace asks campaigners, journalists and politicians about what they think the parliament’s biggest success and biggest disappointment is

TODAY marks the 20th anniversary of the reconvening of the Scottish Parliament and the establishment of Scottish devolution – the culmination of decades of campaigning, which fundamentally altered the tone, practice and nature of Scotland’s politics.

The institution of Holyrood has become arguably central to the national discourse, and the platform through which Scotland conducts itself with the wider world. For some, devolution is the best means of doing so; for others, a mere staging ground for the establishment of a distinct Scottish future.

Reflecting at a commemorative ceremony held at Holyrood on 29 June, First Minister Nicola Sturgeon said: “From land reform in the first parliament to equal marriage in the last to the Social Security Act in this, they have all made Scotland a better place.

“And we are now looking forward to a new decade in which this parliament will build new institutions and I am sure see further change and development.”

In recognition of this anniversary, CommonSpace spoke to a range of figures from Scottish politics, media, activism and public life for their view on the most significant achievements – and disappointments – of devolution’s first 20 years.

“Even though Scots voted for the parliament to have tax-raising powers in 1998, it took persistent pressure from the Scottish Greens for a party of government to have the courage to actually use it, introducing our five-band tax system in 2018.

“But the idea of a parliament that would share power with the people, as I first glimpsed when I gave evidence in the first session, has not yet been fully realised. On land reform, community empowerment and recently in the planning bill, parliament has fallen short of real power to the people.

“The continued centralisation of power in Scotland has left local Government financially squeezed and without real power.

“Meanwhile, the Scottish Government has declared a ‘climate emergency’ but has yet to come up with any meaningful action, or show any willingness to challenge the vested interests of the fossil fuel industry.”

“The best achievement of devolution is to give the Scottish people confidence that a Scottish state can exist and have the right to set the interests of Scotland first. Devolution’s worst failure is in the parliament itself – that what was meant to be a new and modern and responsive instrument of democracy has in some ways fallen back into Westminster patterns of party loyalty and detachment from the people.”

Isobel Lindsay, activist and final convener of the Campaign for a Scottish Assembly

“I think the main social policy achievement [of Scottish devolution] overall has been maintaining a broadly social democratic ethos and avoiding much of the marketisation/privatisation which has taken place in England.

“It has been timid and lacking in visionary innovation in transport, housing, local democracy, land reform. The power of the First Minister has been too great both in relation to the parliament and to other ministers and ultimately this is unhealthy for democracy, but there is little sign of even modest rebellion.”

“For me, the repeal of Section 28 still stands out as a major achievement for the Scottish Parliament. It showed that this new democratic structure could stand up to the sort of financial muscle that so often wins the day and without doubt made things better for everyone in the country.

“I think the great failure has been the lack of willingness to reform and reinvigorate local democracy. Power moving from Westminster to Holyrood should have been followed by power being handed back to communities but that hasn’t happened. I don’t see any way to make Scotland a radically better place without a radical reform of local democratic structures and funding.”

“The ban on smoking in public places has been transformative and is a powerful example of how bold and pioneering the Scottish Parliament can be. My gran worked as a barmaid in tobacco-filled pubs and working men’s clubs. I’m sure this, as well as her own smoking, caused her death from lung cancer a few years before the ban. We need more legislation of this magnitude to tackle other public health challenges.”

“Devolution is a journey and like most journeys you hit delays or take the occasional wrong turn. We need to accelerate in order to tackle poverty and inequality. Too many people are still dying prematurely and needlessly from suicide, drugs or alcohol misuse and poverty is often at the root of it. The Parliament could be doing much more to address the public health emergency caused by substance misuse.”

“I was a wide eyed and excited 21 year old when the Scottish Parliament reconvened in 1999. Having voted Yes/Yes in the referendum, I feel that there has been plenty to be proud of in its first 20 years. As a campaigner for LGBT equality, I’m slightly biased in terms of what I believe to be the greatest achievement of the Scottish Parliament – and that has been the advancements made in LGBT rights.

“The repeal of the damaging Section 28 in 2000 was a bold move from a very new Parliament which faced huge pressure from the Keep The Clause Campaign. The MSPs at the time, to their credit, stood firm against intolerance and paved the way for other notable milestones which would be achieved in the years to come: from marriage equality in 2014, to the Turing law which pardoned men criminalised for same sex relationships and, of course, our work for LGBT-inclusive education which became policy in 2018.

“These accomplishments have helped to drive a shift in public opinion, improve the lives of LGBT citizens, and have identified Scotland as one of the best countries in the world for LGBT equality.

“On balance, over the last two decades, I do believe that the Scottish Parliament has been a success. However, there have been occasions where well intentioned principles have been scuppered by poor policy – for example, the OBFA. Whilst I wholly support a national drive towards eradicating sectarianism from our communities, this legislation disproportionately affected working class fans and criminalised young people, but thankfully that has now been repealed. As stated at the time in a Herald editorial, Scotland ‘cannot arrest its way out of sectarianism’.

“One of the constant disappointments of devolution, for me, is that due to the nature of power reserves – policies are often made elsewhere which have a direct impact on the Parliament and the people here in Scotland; such as the Bedroom Tax, and the Rape Clause, which are unwelcome and do not reflect the nature of the Parliament which has been returned by the Scottish electorate. As a result, both the Scottish Parliament and Government are then forced to mitigate the impact of these policies, and I hope that this set of circumstances will change in the near future.”

“Twenty years on, it is difficult to imagine life without the parliament. So many achievements but for me its biggest one has been that from the early days the parliament has been willing to break the mould. Free personal care set the tone for 20 years of steering its own political route.

“My biggest disappointment has been the amount of time dedicated to constitutional arguments over the past eight years while problems piled up in education, health and local government services.”

“20 years of a devolved parliament that some claim is the most diverse and inclusive institution in the world with human rights embedded at its heart, yet we have only had four minority ethnic MSPs with just two presently. For me, whether it be the pictures I see from 20 years [ago], or the parliamentary chamber today – it reflects an all-white institution with great soundbites on equality and diversity but tokenistic delivery on racial equality.

“[However] it feels like our politicians and parliament is quite possibly the most accessible in the world, with no delusions of grandeur and genuinely for the people – where ordinary people can actually feel they can speak to and meet even the first minister with little barriers.”

“A major achievement of Scottish devolution has been successfully representing Scotland’s social and economic interests while as-best-as-possible defending from unwise, inappropriate and destructive Westminster policies, proving the very point of effective, but insufficiently far-reaching devolution.

“However, a disappointing aspect of devolution over the past 20 years has been the use of consultations as soundbite stop gaps rather than a constructive, consultative service design approach in forming strong policy suggestion.”

“You can’t understand the 20 years of Holyrood without thinking about the broad history it sits in: the credit bubble at the end of neoliberalism, the 2008 crash, and then a decade of transition to a new model of capitalism built on mass surveillance; the accelerating disaster in the Middle East unleashed in the war on terror and 9/11; the rapid rise of China, the breakdown of the climate and death of our forests and oceans and the translation from a fossil fuelled economy to renewable energy.

“In this context, Holyrood has generally played a moderating role – failing to lead the radical changes the moment demands, but holding back the worst that the world might have forced on us. It has gently steered in the right direction at a time when we needed to take a radically different path.”