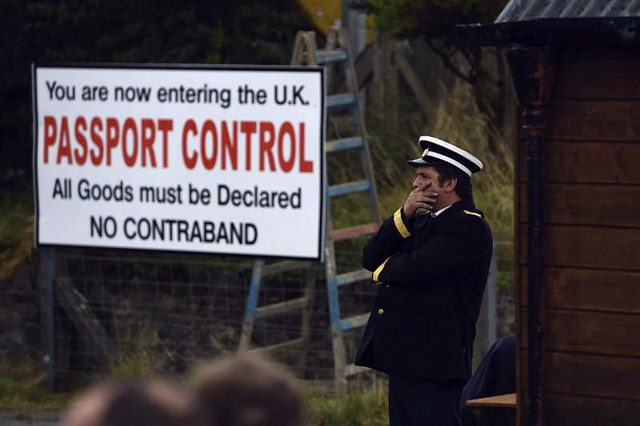 Customs expert with over 30 years experience in the UK and worldwide, Bill Austin argues that Brexit is an attempt to undermine revenue and customs collection to serve unbridled corporate power, but that there is a chance for an independent Scotland to have a tax system among the world’s best

WE NEED to explain to Scotland’s electorate, but particularly No voters, the consequences to their day-to-day lives of the catastrophic Brexit fraud concurrent with demonstrable evidence of how to protect our society through Independence in the EU. No problem, right?

This article humbly suggests our start point may be a Scottish shadow treasury team working closely with the people involved in establishing a National Investment Bank to organise, plan and publish a national tax strategy before and during transition to self-government and good governance. Currently, it’s not clear to me why Scotland does not have such an essential kit in our tool-box.

The Indyref 2014 White Paper suggested replication of the current broken and ineffective British tax system. We should be aiming for a revenues/borders system to be in the world’s top five.

An efficient Revenue Scotland government department consisting of, at minimum, a professional, well trained and resourced Customs Division, Inland Revenue Division and a Procurator Fiscal Tax Office (PFTO) should be pencilled in to the structure of our Shadow Treasury team.

Why a strong PFTO? Because corporate lawyers and the global accountancy firms will fight tooth and nail to ensure an independent Scottish Government is obstructed in tax collection.

To that end, a Scottish constitution must enshrine the concept of “Right Tax at the Right Time” to ensure the tax compliance of every individual and trader within our jurisdiction.

Where does Customs/Revenues/Borders fit into this Brexit bourach, and our alternative of Independence in Europe?

READ MORE: Why the UK’s Brexit customs paper is a fantastical wish-list

Let’s start with the Brexit con and what it will mean. This article contends that the London corporate mafia have zero intention of having import freight control at Dover, the Irish border or anywhere else in the UK and have every intention of exploiting the UK’s offshore location with Europe as a low tax jurisdiction and haven with few labour laws.

What will the consequences be? Reducing import revenues for big business and corporation taxes, for example, must require increases elsewhere to make up attendant massive shortfall to government revenues.

That’ll be Scottish voters again who must cover this hole? Very likely. Personal income tax and VAT rises on every day essentials such as fuel, goods and services will be mandatory to fund the already under-resourced NHS, education, welfare etc.

Let’s nail corporation tax cuts by illustrating what’s going on currently in USA. 80 per cent of shares are owned by only 10 per cent of the population. Corporation tax cuts don’t mean this elite are going to invest more in their global empires or pay more wages to ordinary people. This money, deducted from the public treasury, will be paid to their own shareholdings as stock buybacks or as dividends to be hidden in tax havens.  Is this the kind of example Edinburgh would want to follow? London certainly does through Brexit.

There are two common themes in HMG’s straw-man Brexit papers: “frictionless” and ”innovative facilitations”, translated as hee-haw. They are meant to imply positive activity but actually add nothing but confusion and uncertainty to an already chaotic situation, all to be implemented by 31 March 2019. Aye. Right.

The “customs” service consistently referred to in the Westminster documents no longer exists despite the fact that customs import revenues and inland taxes remain to be collected. To con the public this way is as reprehensible and misleading as keeping Customs signs up at airports and ports. There have been no Customs officers at Dover, Heathrow, Glasgow or Edinburgh since 2005 when HM Customs & Excise ceased to be.  UK Border Force are at these locations and whose priority is immigration. Not Customs.

READ MORE – Bill Austin: I’ve been in Customs for 30 years and I agree with Boris – May’s Chequers plan is a turd

Readers are invited to surf the web in order to identify resourced staffing plans to carry out this new “legislation” in order to satisfy yourselves that the Brexit borders plan is a scam. The media regularly produce Brexit propaganda such as: “An extra 5,000 customs staff will have to be hired to cope with Brexit, the Government has admitted”. But there is zero evidence of HM Treasury approving cash to pay for this. A cursory search of the civil service jobs website, this morning, revealed seven HMRC vacancies and no UKBF vacancies in Scotland. The reality is HMRC and UKBF have been shedding staff and closing offices for the last 10 years.

So, what have we established so far? Nebulous Borders/Customs plans with zero evidence of resources to cope with the tsunami of paperwork and delays due on 1 April 2019.

The corporate mafias are ecstatic that Westminster is ensuring they pay hardly any import taxes and taxation on their profits within UK. Westminster’s own proposals evidence fanciful and specious legislation with zero intention of carrying out effective tax collection anywhere, never mind a hard border.

But “no borders” is a good thing, right? It’s what the EU is all about?

Ok. This is the crux of this article’s argument. Borders are a red-herring.

ANALYSIS: Rhetoric and reality in the Westminster vs Holyrood Brexit standoff

Arbitrary lines on a map based on rivers, mountain ranges, decided on by fallen Empires are an extremely daft and outdated way of protecting specific economies and societies and where they raise their respective revenues. Static controls are easily evaded.

Think of self-governing Scotland as an independent legal jurisdiction which has internationally recognised legal boundaries. A Customs officer at an immobile Customs Station, in the 21st Century, has very little impact.

Professor Hiroshi Motomura at UCLA has pointed out that the legal precedent for the idea of “functional borders” has been long established. The border be conceptualised, according to his analysis, as “not a fixed location but rather wherever the government performs border functions”.

This analysis is key to understanding, protecting and collecting national revenues and, indeed, immigration policies and laws.

Readers will have now identified that contraband or an illegal immigrant remains illegal (within Statute of Limitations of the Scottish government choosing) on crossing the Tweed irrespective of whether any Customs or Immigration officer detects the offence or not. Or on arrival at any of our ports, airports, coastline, airspace or on the internet, within our jurisdiction. These are “smart borders”. Note: There is no such thing as a smuggling home-run.

READ MORE: Why it’s not just planes that vanish in Bermuda

A motivated Scottish Customs officer would follow his/her “revenue-nose” to secure taxes due wherever they are liable in Scotland, within his/her legal powers. Tax evaders and avoiders should have to sleep with one eye open every night.

But having grasped this fact, the fundamental collection of due revenues and taxes must also shine through. Revenues due by any individuals, traders and corporations in any of our towns and cities must be paid correctly on time in order to support government cash-flow. Enshrined in our written Constitution and law. What’s not to like?

Except. This concept is anathema to London. “No borders” to them includes no effective, fair tax collection. Anywhere. The EU fundamentally disagrees with them. Brexit, anyone?

Margethe Vestager, the EU Commissioner for competition policy against cartels, antitrusts and mergers, amongst other things, already has the scalps of Google, Starbucks and Apple on her belt.

She stated in a recent speech: “Last June, we fined a group of manufacturers and distributors of the trays used for packaging food in shops and supermarkets. These companies had colluded to keep prices artificially high for years. Dismantling the cartel was like repealing a hidden tax that millions of unsuspecting consumers in Europe were made to pay.”

READ MORE – Robin McAlpine: A ‘clean economy’ is a great sell for indy – but we have to mean it

We lose this protection with Brexit along with security for our brands such as Scotch whisky, Scottish salmon, and so forth. The Transatlantic Trade & Investment Partnership (TTIP) largely failed because the EU did not accept American demands. The UK can now expect to subjugate itself to a similar TTIP demand, effectively becoming the 51st State, in order to import American unregulated medicines and foodstuffs etc. Donald Trump, as British Emperor. Sweet.

In 2013 Britain overhauled its anti-corporate tax avoidance regime to attract companies to set up headquarters here and to discourage UK companies moving off-shore by introducing an exemption to its Controlled Foreign Company (CFC) rules. CFC rules are usually intended to stop companies shifting untaxed profits into tax havens but London introduced an exemption for interest income earned by offshore subsidiaries, which tax campaigners said was a major loophole. “Rules targeting tax avoidance cannot go against their purpose and treat some companies better than others,” Vestager said. Everybody’s nightmare is the corporations become too big to control. We need some institution to do it.

You can easily see the EU Commissions effect on London’s multi-billions profits, stocks, shares and derivatives if tax had to be paid on them.

Here’s the thing. Markets left to themselves become the private property of cartels. If we didn’t have the likes of Vestager and the EU Commission we would want something like it to have the collective clout to say No to the corporations, wouldn’t we?

This includes ensuring payment of customs revenues and taxes. The EU attempts to ensure fair market rules for everyone with fair revenues in order to encourage competition. Competition is essential for innovation, customers and the economy.

Take subsidies, for example. You and I, as taxpayers through government departments like Customs, give them to corporations. Are you happy with those being unregulated in post-Brexit UK? No, me neither.

Brexit UK is steaming towards unchecked authoritarian power. Powerful lobbies for the powerful few. Power and wealth versus democracy. Unchallenged.

Communities and society need to trust that tax is fair for all which it won’t be post-Brexit. Clearly, that trust has to be earned with encouragement and education towards tax compliance. In 2005, Gordon Brown carried out economic vandalism by killing HM Customs & Excise on behalf of his corporate mafia cronies. Well, Scotland will need a professional Customs Division to carry out its normal tax collection roles but also its law enforcement responsibilities, through production of evidence to our Courts, in order to protect our society. We need our whole society to trust the integrity of our tax system

Democracy through active participation builds trust and solidarity. Trust is not built through exclusion and xenophobia. This is the strongest argument for open EU cross-border co-operation, not Brexit alienation and xenophobia.

In summary, we have a golden opportunity on the horizon for our society and economy to be a happier, fairer place to live and work. Scotland must seize the hour. But there will be very little point in bringing about independence if all we do is swap a London elite for an Edinburgh one.