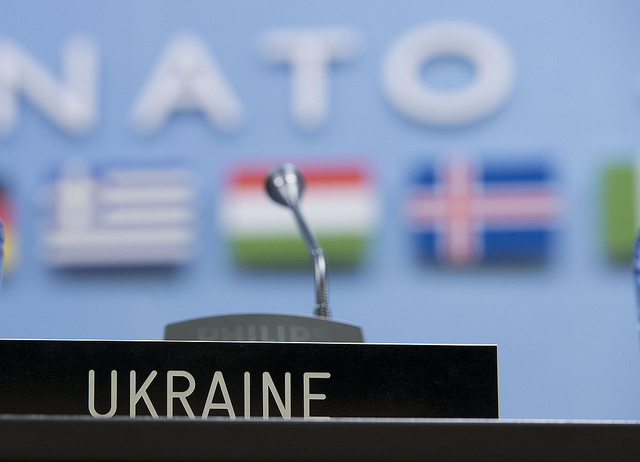 Bill Ramsay, convenor of SNP CND, looks ahead to a fringe meeting at the SNP’s annual conference on Ukraine, and questions whether some MPs would like the party to take a position on Ukraine which would place  the party at odds with Germany  and “the moderate wing” of Nato

SOME within the SNP are less than pleased with the leaderships “obsession” with Brexit; I’m not one of them. Whether we like it or not, our future relationship  with the EU is the issue of the moment.

Given the inevitable unavoidable focus on Europe I’m a bit puzzled why  the Westminster defence team appears to have an alternative “mini obsession” of their own namely the future of the Ukraine leading to them appearing to be, whether intentionally or not, cheerleaders of NATO hardliners like Trump and his new con National Security adviser, John Bolton.

On Sunday [7 October] evening a conference fringe meeting is to take place. “Ukraine: Combating “fake news” and the impact of disinformation on energy security”. The panel will consist of Ukrainian and SNP Westminster parliamentarians.

The promotional statement says that “the panel will explore the impact of Russian disinformation on the Ukrainian energy sector and what Scotland can learn and share, discussing existing challenges and potential solutions in both countries”.

It will be intriguing to discover what common geopolitical features , if any, Scotland shares with the Ukraine. The Ukraine, sadly, is slap bang in a geopolitical hot spot. Scotland, on the other hand is not.

If the panel thinks Scotland and the Ukraine share significant geopolitical concerns it will be interesting to find the location of the longitudinal fault line where the ferry from Ireland to Scotland leaves a geopolitical sleepy hollow and enters a geopolitical hot spot.

I am reminded of a seminar, hosted by the University of Glasgow in the run up to indyref 1, on the security issues that an independent Scotland might want to consider.

All of the speakers were Scots born alumni who were, or had been, big players in the British security establishment. Having listened to the presentations I asked  if the most important  geopolitical characteristic of an independent Scotland was that Scotland, uniquely, had no distinctive geopolitical characteristics. The public declared premise for this fringe event appears to come to the same depressing conclusion.

The question at the Glasgow seminar was a tad cheeky and  tongue in cheek, though most of the audience made up of undergraduate and postgraduate students of international relations seemed to get my joke. The contrast of their laughter with the stoney faced men on the plenary panel was stark.

I get it in spades that Putin’s behaviour is often outrageous. I get that even if the Russian bear was not prodded it would roar into the face of the international community until it were prodded or constrained.

Russia’s great power identity, real or illusory (military expenditure one seventeenth that of NATO countries), is a key factor that props up Putin’s popularity.

We should not forget, his relative popularity is real. He is at least as popular as any UK or Scottish politician, even if doctoring of the figures is factored in. Moreover poll after poll confirms ordinary Russians feel surrounded, irrespective of the reality.

Notwithstanding , if I resided in an ex-soviet state, rather than in Scotland,  I too would strive to devise strategies that might not quite deliver NATO boots on my soil, but it would be a long term dream.

I get that, and I have some respect for the audacity of the Ukrainian government selling the notion to Scottish Nationalist PM’s that their fight is our fight when manifestly, for us in Scotland at least, it’s geopolitically marginal at best.

Ideological solidarity with that section of the Ukrainian polity , and it is only  a section, that is pro democracy is one thing. But it would be a tad irresponsible to hint that a future Scottish Government would break with NATO moderates and side with NATO hardliners and support Ukrainian membership of the EU and of NATO.

The concept of Eastern European non alignment , promoted by the Reagan administration, is now rubbished in favour of a wholly westward pivot that has led to the current crisis, which includes some open warfare and constant cyber warfare.

Moreover for  the SNP at Westminster to consider aligning with the  hardliners in NATO, for whatever reason, is to disturb the toleration of a pro NATO position by the wider SNP membership.

It should be remembered that the pro NATO position was only won by a sliver of 15 at a time when membership stood at 25,000. It is generally accepted that the bigger post Indepenence membership is a more radical and politically engaged 100,000.

However at this moment in time when the issue of the moment is our future relationship with Europe, even the fact of toleration of NATO is secondary.

Quite why some of our MP’s feel it’s appropriate to stand  with the likes of Donald Trump and his security advisor John Bolton and sling diplomatic mud at Angela Merkel for establishing the NORDCO II gas pipeline with Russian is very puzzling to  say the least.

Better surely if the SNP at Westminster did not to take sides on this issue. Who amongst the nation states we need to influence would notice, far less care?

After all I thought that the whole idea of the SNP pivoting to NATO was to win friends and influence people, which should mean the Germans and the French countries, which will have a much bigger say in relation to Scottish future membership of the EU than the Ukraine.

When Scotland applies for EU membership or – if the policy position is not challenged before then – NATO membership, there will be no war in Europe. Sadly and  admittedly tragically, the same could not be said for the Ukraine.

I hope to make the Fringe meeting, if I don’t I hope someone in the audience asks the SNP parliamentarians, would they block Ukrainian membership of NATO, the position of NATO moderates? Or would they take the Bolton line and back Ukrainian membership of NATO? Or might the Westminster group adopt a maybes aye maybes naw position, something not dissimilar to that taken in relation to Georgia’s attempted pivot to the West that ended in tears?

It’s important that the development of SNP security policy is not a spectator sport for the membership, rather that they become active participants in its formulation. This is why SNPCND have organised Scotland After Trident, A Defence and Security Strategy for an Independent Scotland, a one day conference in Sunday 4 November in the Albert Halls in Stirling.