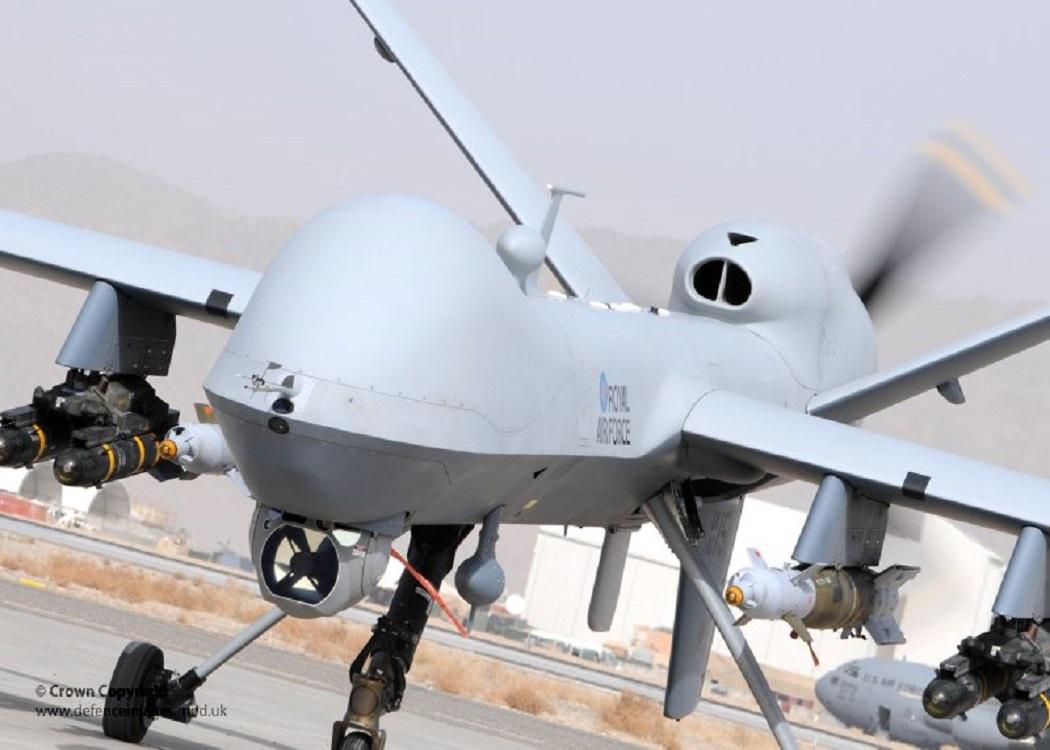 TWO years ago the supposedly sovereign parliament of the United Kingdom voted against air strikes by the Royal Air Force in Syria.

Two years later the Royal Air Force bombed Syria and the Parliament of the UK was powerless to stop it. Moreover, the trumpeting of this exercise in usurpation is taking place during a debate on a refugee crisis in part actually caused by the use of weaponised drones.

Drones, particularly weaponized drones, have many uses, apparently now including the ability to fly around parliamentary oversight in the UK, something first achieved, of course, in the USA.

Drones, particularly weaponized drones, have many uses, apparently now including the ability to fly around parliamentary oversight in the UK.

As Amnesty International explains, there are profound issues around the extrajudicial killing of UK citizens , but there is another equally important issue: the fact that this weapon system has allowed the prime minister of the UK to wage war without parliamentary approval.

The ability to use weaponized drones to wage war without declaring war and the de facto introduction of the death sentence into the body of British jurisprudence are only two of a number of reasons why a campaign to ban weaponized drones should be seriously considered.

Some cold dispassionate assessments of what drones can do and what they can’t do needs to be considered. This is a vital stage if a winning coalition is to be built to see them banned from the arsenal of the armed forces of the UK.

The media will try and park such an initiative as pacifism. If a campaign to ban weaponized drones is to have any realistic prospect of success it must speak to those who think that military action has, from time to time, a role to play in the life of a civilised society.

A key point to get across is that, in the long term, weaponized drones lose rather than win wars.

The starting point needs to be an examination of what the military utility of weaponized drones actually is. Such an exercise will swiftly reveal that this weapons system actually generates insecurity rather than fosters security.

A key point to get across is that, in the long term, weaponized drones lose rather than win wars.

In truth, the powers that be actually understand this but are prepared to thole the downside for the potentially huge political benefits that their deployment and use have.

In that sense weaponized drones share some of the characteristics of nuclear bombs (nukes are only ‘sort of’ weapons akin to kitchen knife and the poker in a domestic dispute that has got tragically out of control).

At the operational level the real military utility of weaponized drones is they are relatively cheap, and are likely, in the operational phase at least, to reduce combatant casualties. Some also claim they target accurately but that claim is in dispute.

Moreover, given their relative vulnerability compared to crewed assets, they can only really be deployed when the war has been won, when those that use them have total air superiority.

In other words, they are a 21st century version of Victorian imperial gun boats in the sky. They are more an instrument of subjugation than a battlefield weapon.

In other words they help the power that uses them to lose the long war rather than win it. Think of Napoleon’s decision to invade Spain and anyone’s decision to invade Russia. At the operational level Napoleon may have been a genius but as a strategist he was more Donald Rumsfeld than, well, Napoleon Bonaparte.

There is no sign whatsoever that a population that lives under the drones’ constant gaze are effectively subjugated. Such populations suffer for certain. They become fearful and present dreadful psychological illness, particularly among children.

Ordinary people trying to live their lives are killed and maimed in even larger numbers. Moreover, the infustructure of civilised living is destroyed.

Inevitably they try and get out of the war zone and bring their families to safety. The irony therefore of Cameron trumpeting a “successful” drone operation under the cover of a debate on refugees is truly remarkable.

Of course, this engenders anger as much as, and in some cases possibly more than, foreign boots on the ground. This anger, which often becomes viral, elicits a response which, if it is to have any chance of success, manifests itself in acts of terrorist outrages.

The more dispassionate among our military professionals refer to these acts as asymmetric warfare (think Wallace and more particularly Bruce). Weaponized drones don’t win wars, in the long term they lose them.

However, although weaponized drones are war losers they, like nukes, have utility and, as with nukes, their utility is in the political sphere back home rather than on the foreign battlefields where they are used.

The irony of David Cameron trumpeting a “successful” drone operation under the cover of a debate on refugees is truly remarkable.

It’s worth noting though, in passing, that these armed drones will never ever be used here in the UK. One has only to imagine the public reaction to the news that a weaponized drone is flying somewhere near you. Such news would lead to civil disorder in the most unlikely of places.

Cameron’s use of weaponized drone technology to face down parliamentary sovereignty is in truth a potential constitutional crisis. It is an act by our prime minister as immoral as it is audacious.

Whether the opposition in the UK Parliament can see through the superficial military rationale for this particular operation to the actual counterproductive truth and on to the usurpation of what passes for a democratic process, remains to be seen.