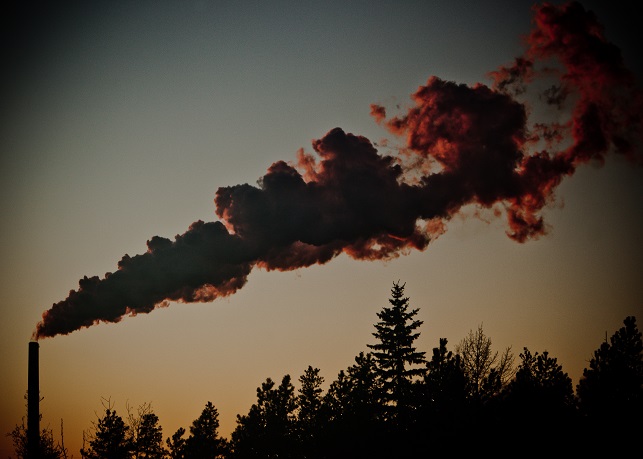 ON the vast frontiers of North America stretch the untamed wildernesses of ice, forest and prairie. Pristine yet desolate, they are earth in its elemental form. But for how much longer?

From the Arctic Sea to the tar sands of Alberta, swathes of land and ocean are being plundered; ripped to shreds by the vicious claws of man to extract the blackest of gold. The lungs of a continent are left slashed. The locals left to wallow in pits of toxic slime to watch their way of life vanish before them.

Despite grave warnings, mankind continues to bleed this earth dry using more extreme, more harmful methods to feed our insatiable appetite for oil. A mere two-degree rise in global temperatures will mean irreparable damage to precious ecosystems and climates putting us on the precipice of an environmental cataclysm.

The energy industry should be investing in a greener, more sustainable future. Yet it insists on raping this earth further, leaving scars too deep to heal.

However, we cannot ignore the role oil has played in shaping the modern world. It is the fuel on which modern society has flourished on the back of industry and technology. From a disparate arrangement of agrarian backwaters, has morphed a dynamic world. A world of innovators, not survivors.

Through these decades we have ridden the tide of economic growth which is now pulling us into a whirlpool of destruction. There are unfathomable riches for areas blessed with the curse of oil. Petrodollars have allowed North Dakota, previously a byword for desolation and deprivation, to grow five times faster than the United States as a whole and have relieved citizens of most taxes.

Yet the oil moguls, in their blind greed, have forgotten that the basis of any economy is a stable environment. Studies now consistently show that burning the remaining fossil fuel reserves will spew a further 1540 gigatonnes of carbon dioxide into an already ailing atmosphere.

Through these decades we have ridden the tide of economic growth which is now pulling us into a whirlpool of destruction.

The melting of the permafrost in the Arctic that will inevitably ensue will unleash an ancient cloud of methane that has been dormant for millennia. This choking release is a one way ticket to unspeakable destruction. And a $60 trillion black hole.

Therefore the questionable economic benefits of continued oil extraction are nothing but an ersatz front for short term profiteering which will inevitably be shot down in the blazing rapture of financial meltdown.

So what of the people of these besieged boom towns? There is debatably a sizeable financial windfall for them, but the long term wounds inflicted upon them will fester for centuries to come.

In Alberta, rivers are being sucked dry to provide the vast quantities of water needed to extract the tar. Ninety-nine percent is tainted with a deadly cocktail of chemicals before being discarded into foul cesspits covering the area of Washington DC which leech into the surrounding watercourse.

First Nation communities, already beset by alcoholism and drug abuse, have seen their way of life eroded. No longer do they hunt, fish and forage. In return, the majority are stuck in a turbulent cycle of low-paid work in the oil industry, existing in cramped hovels while breathing the thick smog that belches from the towering chimneys.

Such an oblivious reliance on carbon has even tempted Royal Dutch Shell into the hostile high Arctic. They circle like vultures over self-inflicted destruction, ready to feast upon the riches they have exposed.

The story is much the same in North Dakota, where previously peaceful settlements have been transformed into sprawling metropolises, plagued by hyperinflation and a shady underworld of drugs, prostitution and crime. Meanwhile, big oil bathes in its blood money, as locals struggle to carve a living in their ransacked communities. For them, life will never be the same again.

Despite the shattering of these vulnerable societies, both corporations and governments alike plough on. Colossal tracts of boreal forest are obliterated. A baying pack of prospectors sweep across the virgin landscape, hacking down grove upon grove of primeval pine which for eons have absorbed vast quantities of carbon dioxide from our atmosphere.

The regulators in our volatile world are now reduced to a savage no man’s land as bituminous sludge is slurped from the deep gouges before being thrashed into a final product by an elaborate process of noxious reactions. This fetid fuel is then burned by brainwashed consumers who drive the vicious cycle on and satisfy the tycoons' disgusting hunger for profit.

Such an oblivious reliance on carbon has even tempted Royal Dutch Shell into the hostile high Arctic, to oil revealed by the parting of sea ice. They circle like vultures over self-inflicted destruction, ready to feast upon the riches they have exposed.

A three-in-four chance of major oil spills means the imperilled ecosystem will be pushed to the verge of destruction, bringing the ghosts of Exxon Valdez flooding back. Most worryingly, though, is the immense scale of this new find. The 412 billion barrels predicted to be found present a glut of fuel that can be exploited for decades when the price is right.

Burning all remaining oil reserves will transform even our lushest paradises into arid wasteland. Scientists have been calling for action with frantic alarm.

Carbon juggernauts will continue to crush hopes of a sustainable future and policymakers twisted in their web of vested interests will avoid the challenge of radical change at all costs. Temptation must be eliminated and new oil locked in the ground. Or else we risk an inevitable armageddon permanently lurking on our shoulders.

Burning all remaining oil reserves will transform even our lushest paradises into arid wasteland. Scientists have been calling for action with frantic alarm. Their research has laid bare the fact that two thirds of the world’s fossil fuel reserves, including every drop of Arctic oil, must be left untouched to have even a chance of avoiding devastating climate change by 2050.

If we pass this perilous tipping point, Italy will be a desert and New York the new Atlantis. An extra half a billion innocent people could starve. From any further temperature rise there would be no return. No escape from the greasy slope plunging towards the vertical abyss of mass extinction that would occur after a six degree temperature rise.

How, in the face of such mortal consequences, can governments and corporations alike be so blasé?

Any notion of morals have been stripped from the bowels of their conscience by a lust for a quick buck. Their 23 years of inaction has been despicable. It is time for change.

How, in the face of such mortal consequences, can governments and corporations alike be so blasé? Humanity is at a critical crossroads.

Humanity is at a critical crossroads. One way the road is straight and smooth: simply maintaining the status quo with a blind indifference to the consequences while squandering £413bn extracting the deadly fuel of a bygone age. The other, a loose, stony track winds up an impenetrable mountain looming ahead.

However, we must go boldly forth on this path, mining the very depths of our ingenuity and skill to foster a prosperous future for our children.

Our societies and economies must revolve around clean technology and break the perverted spell that oil holds over every one of us.