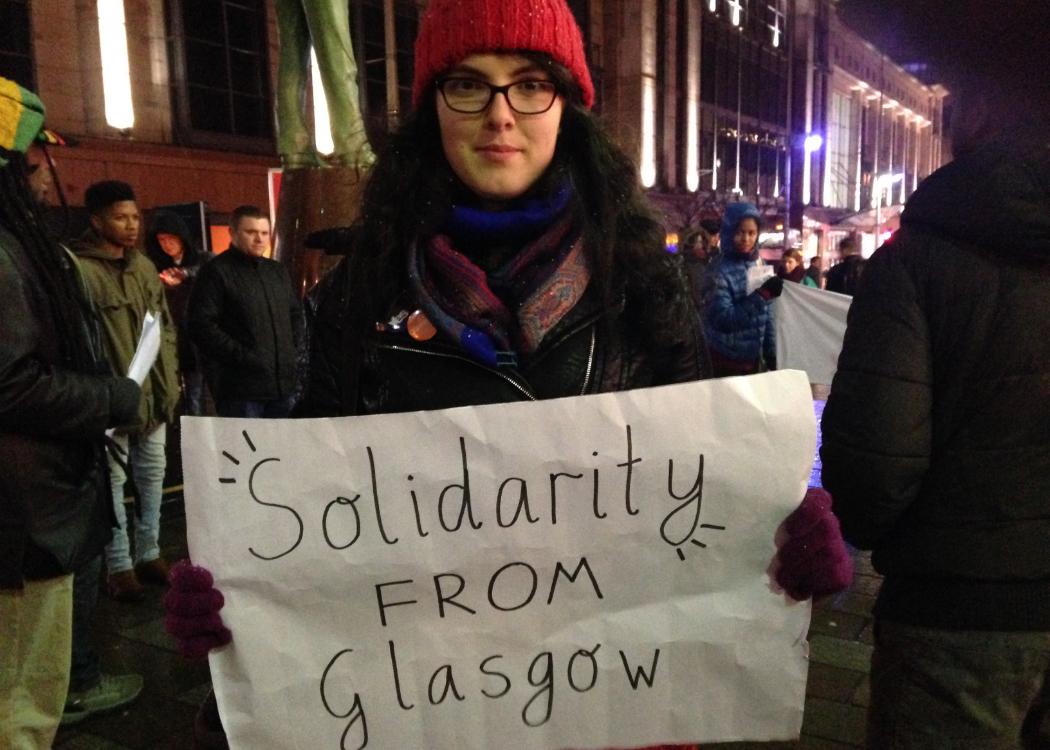 As people wrapped tightly against the cold and snow scurried up and down Buchanan Street in Glasgow on the night of 28 January, a small gathering of people held candles and united in solidarity against the systematic racism shown towards ethnic minorities in the form of police and state brutality in the United States and here in the UK.

The vigil marked the beginning of the Ferguson Solidarity Tour which will be hosted in Strathclyde University on 2 Feb.

The vigil was organised by the Ethnic Minority Civic Congress Scotland, Unity Centre, USSA, and NUS Scotland Black Student campaign in solidarity with the ongoing protests in the US regarding the recent deaths of black men and boys such as Michael Brown, Eric Garner and Tamir Rice at the hands of the police.

There is a long history of black men and women suffering deadly brutality at the hands of the police in the United States, and while these names have become ubiquitous for the fight against systemic racism, they are but a handful in the long line of black men who have lost their lives unjustly.

The Black Lives Matter movement began in 2012 after George Zimmerman was acquitted for the killing of 17-year-old Trayvon Martin. The movement was reignited this year after successive deaths of innocent African Americans at the hands of the police.

However speakers at the vigil were quick to point out that the lack of such a frequency of murder in the UK does not mean that such racism does not exist.

1,500 deaths in police custody since 1990 in Britain – but not a single successful prosecution of a police officer for manslaughter or murder

According to the campaign, there have been over 1,500 deaths in police custody since 1990 in Britain – but not a single successful prosecution of a police officer for manslaughter or murder since the first recorded death in custody in 1969.

Richard Healey from Scotland Against Criminalising Communities stated that ‘Black lives apparently don’t matter in the US, but they apparently don’t matter in London either. If black lives really do matter, then Mike Duggan and Jimmy Mubenga would not have been shot dead.” Healey went on to briefly describe the unjust process of acquitting the involved police officers.

there is a class dimension to this discrimination

Helen Martin, assistant secretary of the STUC agreed, stating that we cannot see this as a “distant issue”, as she claims that “institutionalised racism is still a problem for us”, and that the divergence in the death rates of minorities at the hands of the police in Scotland had less to do with the absence of racism than with the absence of guns. She continued: “We must stand in solidarity with these people and also recognise that there is a class dimension to this discrimination”.

Brother Mando of the Unity Centre Collective in Glasgow spoke further about the difficulties facing asylum seekers and vulnerable refugees in Scottish society.

Referencing the highly criticised detention centre in South Lanarkshire, he stated that “What happens in Ferguson, what happens in Nigeria, what happens in Dungavel, is all connected, and we must rise up together to ensure that we are all treated as citizens.” Mando continued, “It is not Us and Them, but Us and Us. The media is not going to represent us unless we represent ourselves and fight to be heard. If not us, then who?”

What began as a timid bunch of Scots in the snow became a mighty yell of “No Justice No Peace – Until We Get Justice There will be No Peace”, harkening back to the US Civil Rights movement and other protests in the fight against discrimination.

While the storm began to hurry more people home, the steps behind Donald Dewar, now its own rallying point since the referendum, were filled with the sounds of international solidarity.