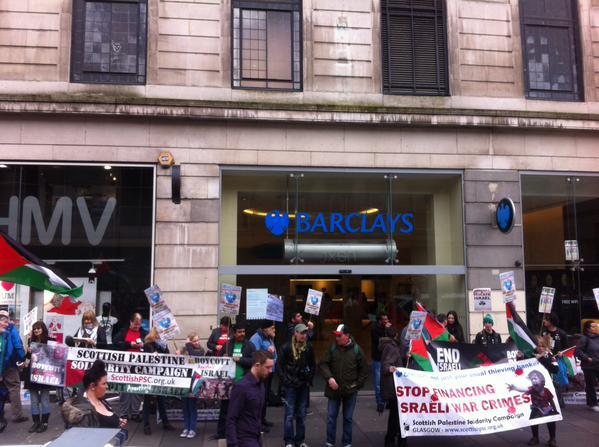 Company profiting from death of Palestinians, according to Scottish Palestine Solidarity Campaign (SPSC)

CAMPAIGNERS took direct action against Barclays bank on Argyle Street, Glasgow, on Saturday in a show of anger at the bank’s investment in Raytheon, which arms the Israeli military.

Around 40 campaigners staged a protest inside the building, causing police to shut down public access and pen the activists inside.

Hundreds of shoppers stopped to watch the scene, as representatives of SPSC explained the action through a megaphone system.

Barclays bank has approximately $35m of shares in Raytheon, a company which has sold missile guidance systems made in Scotland to support the Israeli occupation and bombing of Palestine.

The most recent bombing campaign in Palestine led to the deaths of 500 children and accusations of war crimes against Israeli military commanders.

Raytheon has boasted in marketing material that it can “take a dumb bomb and make it into a smart bomb”.

CommonSpace asked Mick Napier, a spokesperson for SPSC, why the campaign goup took action in Glasgow.

“A Glasgow guy last year, who I know well, a Palestinian Scot, lost 11 members of his family. They were brutally wiped out in the Israeli massacre in Gaza,” he explained.

“We now know that Barlcays invests tens of millions of pounds in Raytheon and Raytheon produce the guidance systems for the 500lb bombs which were dropped on Gaza. The line of culpability stretches from the massacres and rubble of Gaza to Argyle street here. We can’t get to Gaza. We can’t help the people directly, but we are determined to wretched up maximum pressure on Barclays.”

Napier called on support from Scottish local authorities and the Scottish Government for the Boycott, Divestment and Sanctions (BDS) campaign that is supported by Palestinian civic society.

“The Israelis took my home. Scotland is like my second home. I’ve been made very welcome here.” Sana Alkader

He compared Scotland’s support for the anti-apartheid movement in South Africa with the need to provide support for people in Palestine.

A previous campaign succeeded in persuading Barclays to divest from arms company Elbit, which manufactured military drone equipment for bombing in the Middle East.

Sana Alkader, a young Palestinian-Scot who moved to Glasgow after being evicted from her home eight years ago, spoke out at the protest for support from across Scotland.

Alkader told CommonSpace: “I came here to Scotland because I had no where else to live. The Israelis took my home. Scotland is like my second home. I’ve been made very welcome here. It’s really nice to have a good turnout and see the support, because what they are doing isn’t right.

“I think it’s ridiculous [the arms trade]. We have to stop what they are doing. If we have enough support we will stop them. Hopefully we will get out homes and land back.”

The Scottish Government has supported calls for a UN-led investigation into accusations of Israeli war crimes and an immediate arms embargo on Israel.

Campaigners will launch a campaign group against the arms trade with Israeli and Palestinian speakers on 9 May.