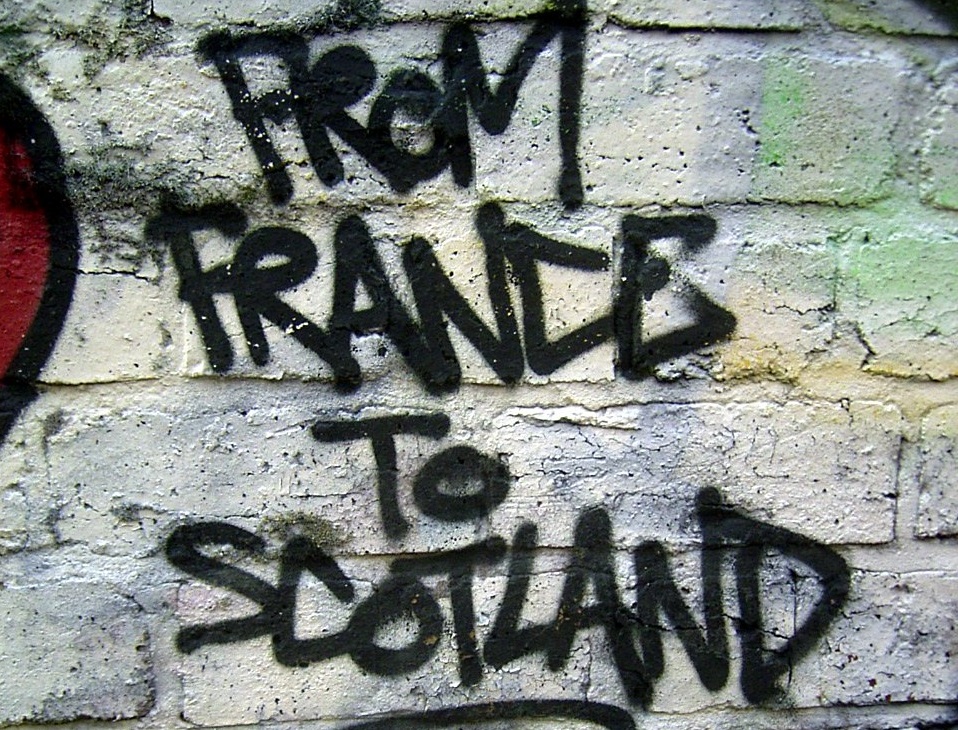 Journalist Ornella Toumi, who is completing work experience at CommonSpace as part of her studies at Stirling University, explores attitudes in France towards a post-Brexit independent Scotland

WHY do the French like Scots? “Easy, because we do not like the English, they are quite treacherous,” jokes Julie Pacchioni, a French student at the University of Stirling, in a nod to history.

The Scots and the French are an old story and the founding pact is the famous Auld Alliance. In Paris in 1295, John Baliol, King of Scotland, and Philip IV of France, signed a treaty of alliance to unite forces against the English. The pact promised that if one of the states was attacked by the English, the other state would invade England.

History remembers that Scottish archers helped Joan of Arc to raise the siege of Orleans. The Franco-Scottish relationship also led to formation of the Garde Écossaise, the fiercely loyal Scottish military unit founded in 1422 by Charles VII, to be personal bodyguards of the French monarchy. The alliance between Scotland and France is one of the oldest and longest in history, and ended only with the unification of England and Scotland.

“England has been an obstacle for too long in the decision-making process of the EU.” Jean-Marc Caparon

It is therefore no surprise that even in France, debate surrounding the question of whether Scotland should become an independent country divides people.

Among French people who back Scottish independence, some see it as a good solution for Scotland to the Brexit problem.

Jean-Marc Caparon, a former journalist for a french local newspaper, sees Brexit as an “opportunity” for the European Union and for Scotland: “England has been an obstacle for too long in the decision-making process of the EU,” he argues.

“If Scotland remains in the EU as an independent state, it could really fit in with the European project.”

There is broad support for this idea in France. Two years ago, a poll commissioned by YouGov Euro Track showed that 61 per cent of people in France were in favour of an independent Scotland staying in the European Union.

“If Scotland remains in the EU as an independent state, it could really fit in with the European project.” Jean-Marc Caparon

Scotland voted to remain in the European Union in 2016 by 62 per cent to 38 per cent, compared to the UK-wide result of 52-48 per cent in favour of leaving. The result reignited the question of Scottish independence despite indyref having taken place less than two years before the EU referendum.

The SNP’s Scottish election manifesto in 2016 reserved an option to call a second referendum if there was a “material change in circumstances” in the UK, such as a vote to leave the EU. Although the SNP narrowly missed out on retaining its majority government at the election, the pro-independence Scottish Green Party provided the additional votes needed in 2017 to set the wheels formally in motion for a second vote.

When May called a surprise snap General Election a short time later as she tried to take control of the Brexit splits within her own party, the SNP dropped a number of Westminster seats and took an immediate step back from its indyref 2 plans.

While Sturgeon insists that Scotland must be given an opportunity to decide its own future direction at around the time of the completion of the Brexit process, it’s unclear how likely is to happen before the next Scottish election in 2021 – if it happens at all.

“A lot of students leave France to live and study in Scotland every year and being a part of the EU makes this possible. Can you imagine the loss for Scottish people culturally and economically?” Isabelle Bianci

For Isabelle Bianci, professor at the faculty of economics in Marseille, if Scotland leaves the European Union with the UK it will be a cultural and economic loss for Scotland.

“A lot of students leave France to live and study in Scotland every year and being a part of the EU makes this possible,” she says. “Can you imagine the loss for Scottish people culturally and economically? Whether Scotland should become independent depends on other factors of course, but this should definitely be taken into consideration.”

Jean-Luc Mélenchon, a far-left French MP who ran for president in 2017 as the candidate of La France Insoumise, has also previously expressed support for Scottish independence, saying in 2012: “Of course, I would vote for Scottish independence because I’m too keen on history not to know that Scotland is the traditional ally of the French ever since the Ancien Régime.”

However, not all in France are nostalgic about the Auld Alliance, and the risks of a unilateral declaration of independence in Scotland could scare French people.

Quoted in The Telegraph newspaper in 2014, Philippe Moreau-Defarges, an expert on self-determination at the French Institute of International Relations, pointed out that the modern day link between France and England is much stronger: “An independent Scotland would be a strong shock. Yes, France and Scottish relations go back to medieval times, but the first employer of the French today is London,” he said.

Scottish independence could pose other problems for France. Corsican, Basque and Breton nationalists supported Scotland’s independence referendum in 2014 and began urging the French government to let them hold similar votes on independence.

However, not all in France are nostalgic about the Auld Alliance, and the risks of a unilateral declaration of independence in Scotland could scare French people.

Corsican nationalism is a political, cultural and social movement which sees Corsica as a nation, and lobbies for autonomy and independence from France. During the 2017 parliamentary elections, three separatists were elected to the National Assembly for the first time.

French President Emmanuel Macron is the guarantor of the integrity of the French territory, but he is not the only one. According to a French poll from L’Opinion en Direct this month, the majority of the French population (74 per cent) strongly oppose the idea of ​​independence for Corsica.

Most people in France are also against the independence of Catalonia from Spain. Although French people were extremely shocked by the violent reaction of the Spanish police force to those voting in the Catalan referendum last year, a recent survey published by Odoxa revealed that more than 60 per cent of the French think the independence of Catalonia would be wrong for Spain and Europe, and 54 per cent think it would be wrong for France.

In the current delicate climate, President Macron and the French government have been careful to avoid expressing an opinion about a second independence referendum in Scotland.

More than 700 years ago, France and Scotland had a common cause and shaped a union to limit the power of England. In the course of time, the affection remained but the causes were not the same, as France became allied with the dream of a strong United Kingdom, fully engaged in the European project.

Nethertheless, in the context of Brexit it is possible that the flame of the Auld Alliance could be revived. France may be left to decide whether it prioritises a relationship with the economic powers in England, or whether Scotland’s commitment to the European project is ideologically more valuable and significant.