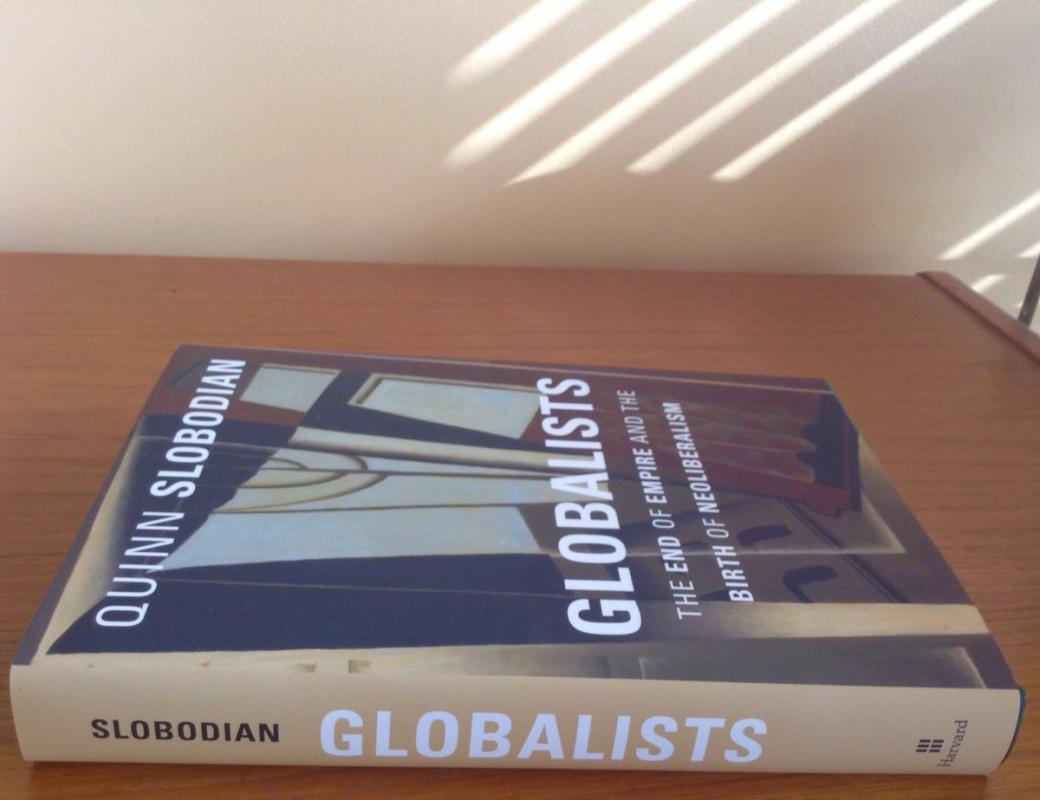 Mathew D. Rose, editor of Brave New Europe, reviews historian Quinn Slobodian’s ‘Globalists: The End of Empire and the birth of neoliberalism’, the first intellectual history of neoliberal globalism which challenges the commonly held assumption that neoliberals are opposed to the state

ABOUT a year ago a few academics declared that one could not discuss neo-liberalism because it could not be defined. This seemed rather odd, seeing that the most important literature on the topic, books, papers, and articles, overlapped 95 percent in their definitions. A tweet from London dismissed this claim from the Ivory Tower with the simple statement that “Anyone in London would recognise neo-liberalism when they see it”.

Thus I approached Quinn Slobodian’s “Globalists” with a certain trepidation, fearing another lesson from the Ivory Tower on how we mortals are supposed to view neo-liberalism. Instead, what came was a pleasant surprise. Slobodian approaches the topic of neo-liberalism as a historian, examining the political and social aspects, following the development of the neo-liberals, or globalists as he terms them, from their inception in Vienna in the 1920s, over two decades before Mont Pèlerin, and follows the vicissitudes of their theories to their eventual fateful political and economic hegemony.

For the globalists, who according to Slobodian envisioned a world governed by the sanctity of private property and the forces of competition, the two greatest threats were democracy and national sovereignty (and still are). These were the elements blocking true liberal free trade. Their ideal was the British Empire, which facilitated free trade and the movement of capital across the globe. This was very beneficial for the British and their commerce but destroyed cultures and massacred the populations in their colonies, which had other values than a free market. But for the neo-liberal disciples in Vienna and later Geneva, such militarised liberalism was the means of fulfilling their technocratic ideology, a “flat world economy”, free of tariffs, regulation, and democratic interference.

The future role of the nation state, the main political institution of many civilisations during the past 2,500 years was, according to Slobodian, defined for the neo-liberals by a former prominent Nazi jurist, Carl Schmitt, in 1950. For Schmitt there would be two political worlds in the future: “Imperium”, which referred to the administration of a nation state, was more concerned with political folkore: flags, symbols, language – repression is not mentioned. The real power would lie with “Dominium”, “the world of property, where people owned things, money, and land scattered across the world”. Of course this latter global world would, according to the dogma of the neo-liberals, be legally predominant – beyond interference by nation states and their democratic aspirations.

Much of Hayek’s and Mises’ neo-liberal thinking was developed in interwar Vienna, where they sided with the reactionary elements, celebrating the bloody repression of workers’ movements. It was the threat of democracy that had to be overcome in their eyes. They became vociferous if not fanatic proponents of a global free market, only achievable if the state reduced its activities to ensuring security for private property, uniting forces with finance and commerce.

This wish to ban democracy by Hayek and Mises, installing a hegemony of business interests over democracy, was not at all isolated at that time. Oddly Slobodian fails to mention that this was the concept of Mussolini’s fascist “Corporatism”. In fact he ignores the fact that, in that age of universal totalitarian systems, neo-liberalists of the period were equally trenchant in their world view as Fascism, Nazism, or Bolshevism. Nor should one forget that Hitler was in Vienna during this same period, just as influenced by the political and economic events there as were his two fellow Austrians. It was the same melting pot of totalitarian systems.

Equally odd is Slobodian’s silence about what occurred among the neo-liberals during the Third Reich. He vaguely implies that they were against Nazi fascism, but never goes into any detail. Even when Slobodian quotes one of the most prominent of the founding neo-liberals, Wilhelm Röpke, who wrote to a friend “I am even ‘more fascist’ than you yourself”. Slobodian simply ignores this and moves on. All the more curious then that further on in the book Slobodian claims that Röpke was later to become “one of the intellectual fathers of the postwar `social economy’ in West Germany”.

Later on we discover that many of the neo-liberals, especially Röpke, were dyed-in-the-wool racists – European fascists usually are. Thus it comes as no surprise that they were especially supportive of apartheid in South Africa. Others such as Hayek, for example, saw apartheid as “both an injustice and an error”, but were against sanctions and embargoes, as this violated free trade. Slobodian sums up the neo-liberal position on race as follows: “Hayek’s militant globalism affirmed that the totality must hold against the ruinous demands of a globalised morality”.

Thus in the years to come the Globalists would support military coup d’etats apparently including civilian massacres, military intervention by Western nations in the Third World, racism (especially in repudiating the principle of one person one vote, mainly along race lines), and de facto racist regimes.

Despite their calls for a global free market, the neo-liberals were not able to emancipate themselves from their eurocentricity. As in the British Empire, there should be free trade, but to the advantage of the former colonial nations. This played an important part after the war as the former European colonies in the Third World demanded equal rights with the developed nations. The writing was on the wall. To catch up with the Western economies these new nations would have to employ economic tools such as tariffs and nationalisation. But the neo-liberals were fighting a war on two fronts: first, against third world economic self-determination, and second, via American support for an International New Deal to help these nations achieve economic equality, not shrinking from market interference.

The professors from Europe would have had little influence, but by now they had powerful political allies in European governments and the “brute economic interests” of the United States transnational corporations. The Globalists maybe have propagated Imperium in the Third World, but were not prepared to sacrifice imperialism itself. Slobodian tracks this process brilliantly with his passion for detail, especially how international organisations, that were created to provide economic equality and justice, were subverted into doing exactly the opposite, in fact creating neo-colonialism. Walter Lippmann appears to have provided much of the political nous, which the academics lacked, to win powerful political and financial backing for neo-liberal dogma – something Slobodian touches on, but which is surely an interesting topic in itself.

Chapter 7, “A World of Signals”, the longest of the book, is superfluous to the overall design of the narrative, being dedicated mainly to Hayek and his thinking. Parts deal with his metaphysical driftings bordering on mysticism, whereby Slobodian seems to wish to reclaim a sort of Economic Categorical Imperative for Hayek. The book would have been more effective without it.

Without a doubt this is a good book and a major contribution to the discussion around neo-liberalism and its historical and political development. Unfortunately the historian Slobodian fails to put the topic in a historical context, especially omitting to explain that the original and most prominent Globalists were very much in the Austro-German political and economic tradition of their time. Instead he portrays globalism as something unique. Hayek, Mises, and Röper may have not been “nationalist” and “socialist”, but they were no less totalitarian, dogmatic, anti-democratic, and racist than their contemporaries.

This article was originally published on the Brave New Europe website.