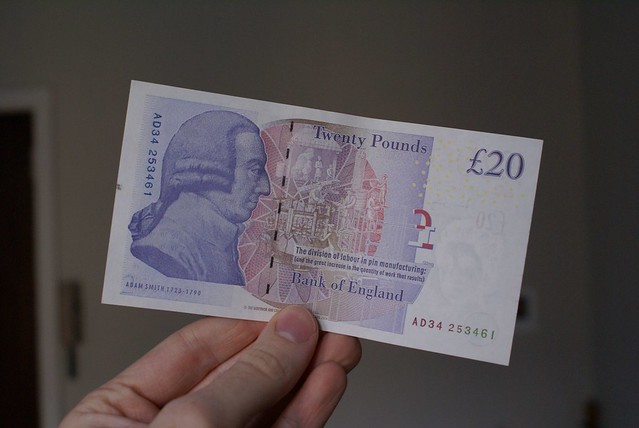 POLITY describes its series “The Case for” as “making the case for the radical, positive policies that we need to tackle these big problems – a dysfunctional economy, wealth and power concentrated in an elite few, and environmental and social crisis in bold but practical ways”. The books are short (in this case 135 pages in a small format) – and to the point. There is probably no better author for such a project than Frances Coppola.

Besides being an economics expert and author, Coppola is a singer. She would probably have been a great swordswoman too. Her analysis and arguments are rapid and precise – thrust, parry, and thrust. Add to this her straightforward writing style and you have a page-turner.

The thesis behind the book is that, although quantitative easing since the Great Financial Crisis of 2007/8 has failed, the cause of failure was its implementation, not the policy itself. Quantitative easing was a policy proposed by Milton Friedman and Ann Schwartz back in 1963 as a way to counter a financial depression, or “Great Contraction” as they termed it. The idea was to radically increase the money supply, providing consumers with money to resuscitate the economy. Five years later Friedman used the metaphor of a helicopter dropping money over communities to achieve this goal. He emphasised that it had to be a one-off event to discourage people from saving it, thinking there was more to come.

Following the Great Financial Crisis, central banks worldwide initiated Friedman’s policy of helicopter money, dispensing trillions of dollars. However, as Coppola explains, this massive use of quantitative easing, or the “Great Experiment”, failed because Friedman’s “‘helicopter drop” came to mean not putting money into people’s pockets, but rather casting money blindly onto international financial markets without regard to where it would end up. The desired result did not happen; instead we find ourselves in the “Long Stagnation”.

So where did the helicopter money go after it was distributed to the financial sector and corporations? Much of it was invested in emerging markets. Corporations used it to buy back shares to increase the price of their stock and boni without increasing productive activity, or as Coppola writes “Wall Street is awash with money, while Main Street dies of thirst”. This explains the asset bubbles and the low unemployment rate in some nations, while wages remain stagnant.

Coppola argues convincingly that what we need is Quantitative Easing for the People. In her opinion had homeowners and small businesses received the same support as banks and corporations, “the Great Recession might have been merely a minor economic downturn”. She then looks at alternatives for how this could have been accomplished. Type 1 is “Give the People the money”, explaining methods of distributing the money, as well as how the government finances such a helicopter drop. Type 2 is “Economic rebalancing”, enabling lasting structural change in the economy instead of a short-term spending boost. This could be achieved by the central bank directly financing the government to enable such a programme or buying bonds issued by a state investment bank. A third possibility would be to “support private-sector investment, by buying corporate bonds and equities, and by supporting small and medium-size enterprises”. But Coppola does not lose sight of the challenges this would present. She devotes a complete chapter – the longest of the book – to “Some (Weak) Objections to QE for the People”.

The first of these is inflation or even hyperinflation. Hyperinflation, as Coppola points out, “is one hundred per cent associated with government ineptitude”. (That it can be politically convenient and intentional as in the case of Germany between the wars is not mentioned). There is however no reason why deflation cannot be overcome, but certainly not in the manner that central bank QE has so far been employed. Ten years on, in most nations inflation has not reached the desired levels – a dismal failure. Coppola asks pertinently how long this abuse of central bank independence for political and ideological reasons will be tolerated.

Central bank independence is a “fig leaf”, says Coppola. Successful QE can only be attained when central banks work together with fiscal authorities. And QE will cause inflation, she explains: That is its purpose – with the caveat that there is a responsible government backing the central bank, and not the afore-mentioned government ineptitude that results in hyperinflation, or chronic deflation.

READ MORE: Robin McAlpine: Escaping corrupt London finance is one of the biggest opportunities of independence

Then there is the question of people not spending their helicopter money, but hoarding it. Coppola goes through a number of solutions to avoid this, but also refers to a recent example of helicopter money for the people – Australia during the Great Recession 2008-2009 – where forty percent spent the money, another thirty-five percent paid down debts, and just a quarter saved or invested their money.

Coppola examines the difference between the monetary policy of the central bank, and fiscal policy of the government. In her opinion the goal of fiscal policy is to redistribute wealth in a society, while the purpose of helicopter money is to create and distribute new money. “Increasing the base money stock to counter deflation caused by failing bank lending is the central bank’s job”: to manage cyclical variations in the economy, not to determine its long term direction.

Coppola blames the European Central Bank (ECB) for failing to deal with the current stagnation. The reason is the fiscal responsibility that the bank is supposed to replace, while the policies at its disposal can never fulfil such tasks. Instead the role of the ECB, one which it happily embraces, has become far too political (and ideological). The ECB does not have a democratic mandate, nor is it accountable to the people. To gain any credibility among EU citizens the bank will have to be democratized, she says. “Governments are not naughty children to be disciplined by central banks, and central bankers are not high priests who alone can placate the angry economic gods. The sacred cow of central bank independence must be slaughtered,” replaced by a new cooperation between central banks and governments.

“There must be zero tolerance of polices that exacerbate inequality and hurt the poor. Public investment banks and sovereign wealth funds must be created in every nation.Laws and rules forbidding cooperation between governments and central banks need to be removed, especially in view of the climate crisis.”

In mainstream media, helicopter money is often portrayed as an absurd idea propagated by a few nutters. Coppola argues the contrary: the absurdity is that, after ten years of failure, current central bank policies are still being taken seriously. A great read in a promising series.

The Case for People’s Quantitative Easing by Frances Coppola, published by Polity.

This article was first published on Brave New Europe. Find out more about the site here.