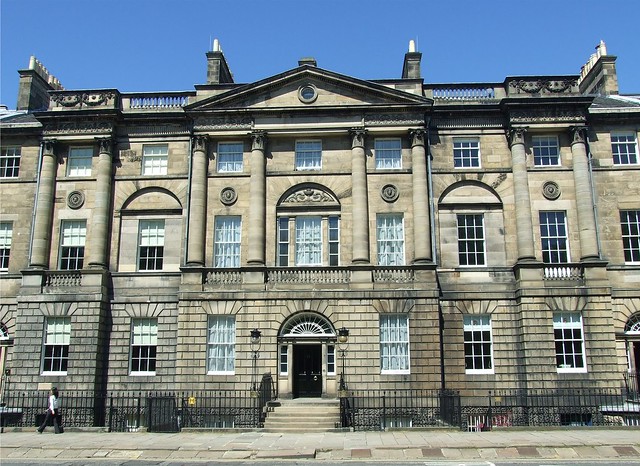 NEW Prime Minister Boris Johnson was ushered out of Bute House, the First Minister’s residence, by the back door following angry protests against him when he entered to meet Nicola Sturgeon this afternoon [29 July].

Johnson was pictured exiting through a difference entrance to the one he arrived in at Charlotte Square in Edinburgh, where he had been greeted by loud boos on arrival.

The protests came after a demonstration in Glasgow on Monday morning organised by the Radical Independence Campaign.

Boris Johnson arrives to a, erm, warm welcome at Bute House where he is meeting Nicola Sturgeon. pic.twitter.com/7AnjA1YiHl

The prime minister had been expected in Scotland’s largest city but instead visited the Faslane nuclear submarine base in Helensburgh, before travelling to meet Sturgeon and Scottish Tory leader Ruth Davidson in Edinburgh on his first visit north of the border since landing the top job in a Tory leadership contest, which finished last week.

After the meeting, Nicola Sturgeon said she was convinced that Johnson’s government was taking the UK on an “almost inevitable path” to No Deal Brexit.

“Behind all the bluff and bluster, this government and the path it is pursuing, I think is dangerous,” she argued.

Asked about whether a second independence referendum was raised, the First Minister said that there was a “lively” discussion, and that she reiterated that “as a result of Brexit” it was “necessary for Scotland now to consider whether it wants to become an independent country.”

Sturgeon added: “Clearly Boris Johnson takes a different view of that. But it is not, in my view, a democratic position to block the rights of the people of Scotland to choose and I made that clear to him.”

The First Minister is pursuing a Referendum Bill through the Scottish Parliament, but has not yet called for the UK Government to deliver the section 30 order needed to hold a fresh plebiscite on independence. Sturgeon initially said she planned to hold ‘indyref2’ in the second half of 2020, but indicated that she would consider fast-forwarding those plans after Johnson becoming PM.

A statement released by the Prime Minister’s office following the meeting with the First Minister said: “The Prime said he was a passionate believer in the power of the Union and he would work tirelessly to strengthen the United Kingdom and improve the lives of people right across Scotland.”

Ahead of the visit, the UK Government announced it would be spending £300 million on Scotland, Wales and Northern Ireland through the Growth Deal, something which Scottish Finance Minister Derek Mackay said was not new money as it already had been in the pipeline before Johnson became prime minister.

Davidson stated in a column on Sunday that she would back Johnson as prime minister but would oppose No Deal Brexit, a line in contradiction to Johnson’s commitment to leave with or without a deal on 31 October. Following the meeting on Monday, Davidson struck a more conciliatory tone, saying that she had got reassurances from Johnson that he was pursuing a deal with the EU.

The Glasgow Disability Alliance’s ‘Young Drivers for Change’ demanded an audience with the Prime Minister ahead of his trip, seeking to challenge Johnson to reveal how he would make up for cuts under the previous prime minister with new investment to improve accessibility.

Zoe Little of Young Drivers for Change said: ”We may be disabled but we’re still human. We have rights and these are being trampled on,” Zoe Little stated.