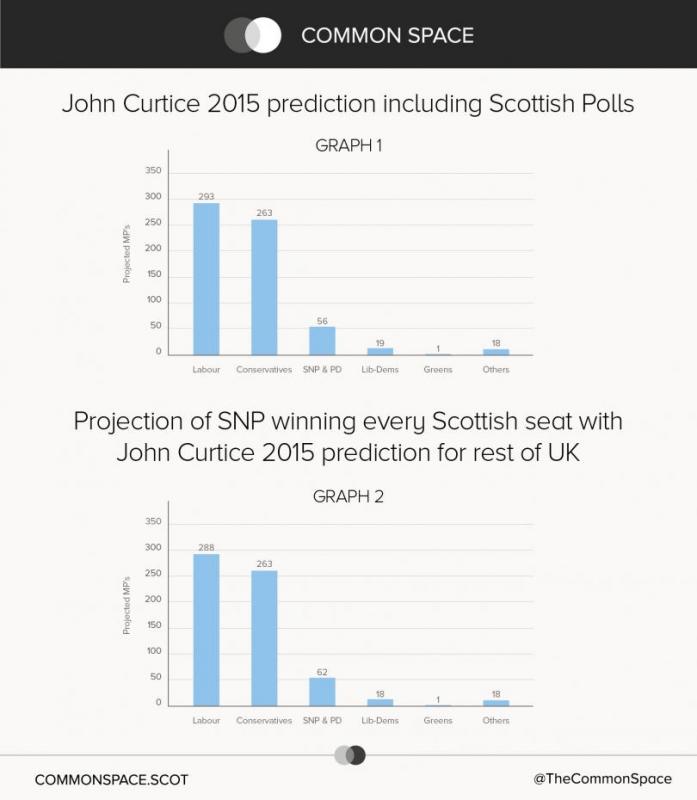 Analysis shows total SNP victory in Scotland would not give Tories more MPs than Labour, on current polling projections

COMMONSPACE analysis shows that if current polling projections are maintained in England and Wales, Labour will have more seats than the Tories in the 2015 General Election no matter how many nationalist MPs are won in Scotland.

In John Curtice’s latest report for the Electoral Reform Society, ‘The Lottery Election’, Curtice combines the figures of a UK poll of polls with a Scottish poll of polls, all from January polling (February polls have not changed the situation).

While most media coverage of the report focused on the likelihood of a ‘rainbow coalition’ after the General Election, figures suggesting SNP votes will not prevent Labour becoming the largest party went largely unexamined.

– Find that the real threat of a Tory government comes from a blue surge in England and Wales in the final three months of the campaign.

– Reveal that if current polling trends remain static in England and Wales, the political arithmetic means that the more successful the SNP are the more likelihood there is of a minority Labour government relying on SNP votes to stay in power.

Graph 1 clearly reveals that on current projections Labour is heading for the most seats but not enough to govern on its own. This is despite the fact that it is polling only enough to win six MPs in Scotland, with the SNP taking the other 53 (PD refers to Plaid Cymru in Wales, which is projected to win three Welsh MPs).

If this poll turns out to be accurate, Labour would have to rely on the SNP and PD support to govern, or an unlikely combination of Lib-Dems, Ukip and the DUP in Northern Ireland. There would not be enough seats for a Labour and Lib-Dem coalition.

In Graph 2, CommonSpace alter Curtice’s graph simply by changing the figures to project what would happen if the SNP won every seat in Scotland, while the seats in England, Wales and Northern Ireland stay the same as Curtice’s projection in Graph 1.

Graph 2 shows the SNP gaining all Scottish seats (59) and PD remaining on three (the nationalist seats stand at 62) with Labour dropping five seats from Scotland and the Lib-Dems one. The outcome on a UK-scale does not look much different, with Labour still securing more seats than the Conservatives.

The major difference is that now Labour would not be in a position to govern with the support of the SNP, unless it built a ‘grand-coalition’ with the Tories, something which would have severe political repercussions.

Therefore, to keep the Tories out of power the key battlefield may not be Scotland: even if the SNP wiped out Labour north of the border, Ed Miliband’s party could still do better than the Conservatives if it holds the fort in England and Wales.

As long as there is no swing to the Tories south of the border, votes for the SNP in Scotland would have the overall effect of making Labour more reliant on nationalist support to govern, something which a majority of Scots (according to opinion polls) see as the most desirable outcome of the 2015 General Election.