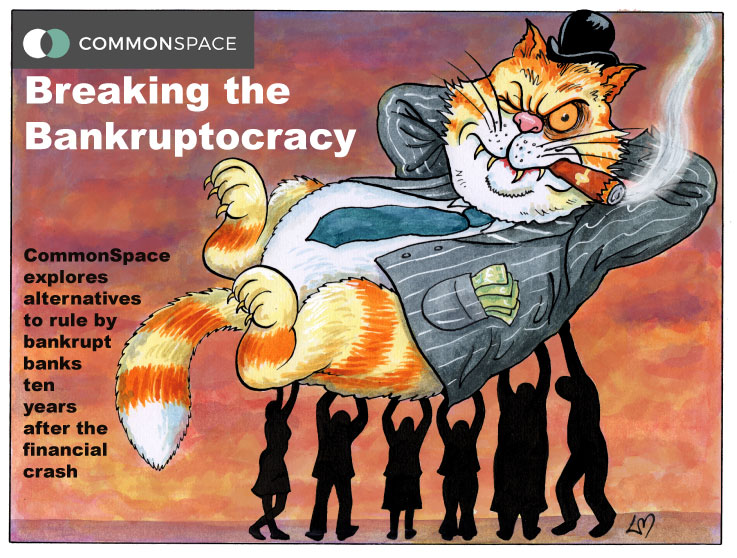 CommonSpace wants to hear your ideas on alternatives to bankruptocracy during our special week of coverage – email ben@common.scot

15 SEPTEMBER will be exactly 10 years since the Lehmann Brothers US investment bank collapsed, the key moment in the great financial crisis of 2008.

We all know what happened next – the losses were socialised while the bankers kept their profits and bonuses. While home owners faced repossession, the bankers quickly got back to the same old tricks.

Except something fundamental did change – because they had been deemed too big to fail, our whole economy was suddenly geared around propping up the bankers.

This bankruptocracy, as economist and former Greek Finance Minister Yanis Varoufakis calls it, meant public services were sacrificed on the basis that the bankers needed a buffer in case the system crashed again. Never mind the fact that it was the cost of bailouts – not state spending – which had increased government debt levels across the western world.

But it’s worse than austerity, declining living standards and banker bailouts. Banks refused to lend to the real economy after the crash, and with interest rates at historic lows Central Banks internationally decided to create more than £12 trillion in new money, which they used to buy up government bonds from banks, who then used this money to re-inflate already existing wealth, especially in the form of property speculation. The Bank of England has even admitted that the main outcome of this Quantitative Easing (QE) policy – ostensibly about encouraging banks to lend – has been to drastically increase wealth inequality, at the expense of those who don’t own property, exacerbating the UK’s housing crisis.

So how has politics responded to Bankruptocracy? Surely, in these circumstances, social democratic parties would sweep the board, exposing the tories and other centre-right parties in Europe as the proctectors of the corrupt bankers, bought buy the City of London, and that rather than the poor paying for this mess the finance sector will have to make the sacrifice for their own recklessness?

Nope. Instead social democratic parties have seen their vote collapse across Europe, as they have more often than not been at the forefront of austerity and propping up the bankers, and failed to offer any alternative narrative to bankruptocracy. This phenomenon – known as Pasokification after the Greek centre-left party Pasok which had dominated Greek left politics for the 40 years since the end of dictatorship but has been left as a fringe party due to its embrace of severe austerity – has begun to be challenged by new leaders on the left of politics like Bernie Sanders and Pablo Iglesias and new ideas which are willing to challenge the bankruptocracy.

This is what CommonSpace’s special week of coverage on 10 years since the financial crash will explore. We are going to look at:

– What is actually wrong with how the banking system works and how practically does it need to change?

– What are the alternatives to bankrutpocracy which are beginning to gain mass support in the western world, and how are ideas changing on the left in the aftermath of the crash?

And we want to hear from you, our readers. Send us in your ideas about economic alternatives to bankruptocracy to ben@common.scot. It doesn’t have to be a long piece – a few hundred words outlining your thoughts 10 years after the crash would be great.