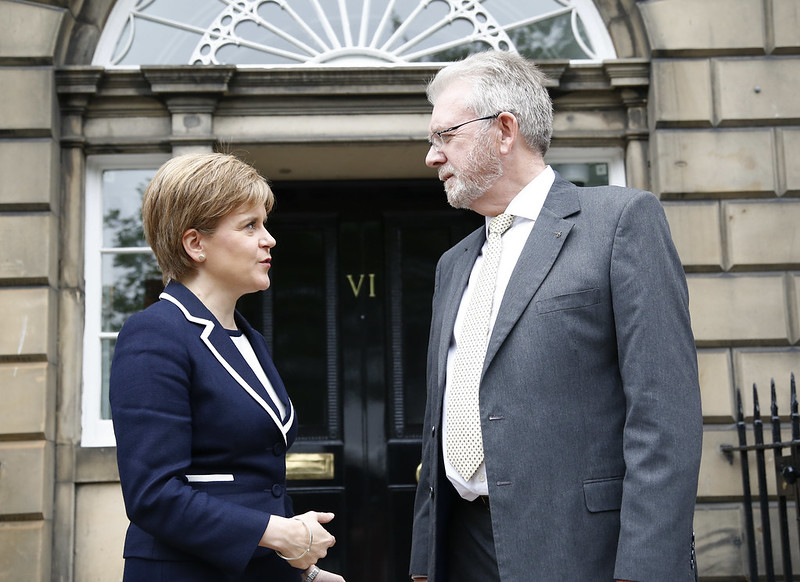 Brexit deal will leave Scots £1,600 worse off by 2030, according to Scottish Government impact assessment

BORIS JOHNSON’S proposed Brexit deal will weaken workers’ rights, environmental standards and the economy, according to a new impact assessment by the Scottish Government.

The Scottish Government analysis found that Boris Johnson’s revised Brexit deal would leave people in Scotland £1,600 per head worse off by 2030.

Scotland’s Gross Domestic Product (GDP) would fall by around £9 billion under the deal, compared to projections for if the UK remained in the EU, according to the new impact assessment.

Cabinet secretary for government business and constitutional relations Michael Russell announced the launch of the report in the Scottish Parliament this afternoon, where he said that Johnson’s Brexit deal would leave Scotland “vulnerable to trade bullying by Donald Trump”.

He said: “We know the prime minister is desperate to do a trade deal with the US which will open our markets to chlorine-washed chicken, hormone-objected beef and which we saw this week will damage our NHS by allowing drug prices to be driven up in order to fill American billionaires’ pockets.”

Russell’s comments referred to a Channel 4 Dispatches investigation which revealed secret meetings between UK Government officials and representatives of US pharmaceutical firms, where they talked about the price the NHS pays for medicines.

The investigation was pointed to by political opponents as an indication of the kinds of trade-deal that the Conservative government is likely to make with the US if Johnson’s Brexit deal is successful.

Russell also highlighted concerns raised in the Scottish Government’s analysis that Johnson’s deal could see “workers rights and protections under threat and our environment trashed”.

According to the report, “the deal paves the way for a deregulation agenda by the UK Government”, in light of a weakening of commitments to provide a ‘level playing field’ with with the EU. This impacts on the UK’s obligations to maintain EU standards, for example around the environment and human rights.

The analysis finds that in a scenario where there could be 50 per cent less EU migration, the working-age population in Scotland would drop by 1.9 per cent, compared with the current projection of 0.2 per cent. In this scenario, the proportion of children would decline by 12.8 per cent in the next 25 years.

Speaking in parliament today, Russell argued that the only way to protect Scotland’s interests was to “have done with the very idea of leaving the EU” and to vote for Scottish independence.

He said: “The people of scotland have the right to determine our own future free from the Brexit chaos we see at Westminster every day — a future as an independent member of the EU.

“It is time that the people of Scotland were given the chance to say so, and first of all that will happen in an election on the 12 December. Bring it on.”

While Tory MSPs Murdo Fraser and Adam Tomkins condemned Russell’s speech as “party political broadcast” and an “abuse” of the parliament’s time, other MSPs were united at least in their opposition to Brexit and to Boris Johnson’s deal.

Focusing on the concerns around maintaining EU standards, Scottish Green co-leader Patrick Harvie asked Russell if the current devolution settlement would allow the Scottish Parliament or Scottish Government to take action to “protect Scotland, even in devolved areas, from that kind of deregulation”.

In response, Russell said “there is nothing in the present devolution settlement that cannot be overruled”, and that this was the reason why independence must be seen as the only viable route.

Speaking afterwards, Patrick Harvie said: “Liz Truss, the trade secretary, said that scrapping those protections is vital to giving the Tories the freedom and flexibility to strike new trade deals.

“On the same day an unnamed cabinet source said the level playing field policy ‘has to go’ because ‘it would seriously restrict our ability to deregulate’.

“If that withdrawal bill is put forward after this general election, we face the very real threat that the Scottish Parliament may be unable to protect Scotland from this kind of hard right extremist ideology.

“That’s why it’s vital for Scotland to have the right to choose our own future, so we can start to build a progressive, sustainable independent Scotland in Europe.”

Meanwhile, Labour’s communities and local government spokesperson Alex Rowley said that the “forthcoming campaign is about more than just Brexit”, and challenged Russell on the impact of the proposals put forward in the Growth Commission report, which outlines an economic vision for an independent Scotland.

Rowley argued that the proposals were “bad for Scotland” and would lead to “years, indeed decades, of austerity”.

Russell replied: “I know Mr Rowley and I both want to see a better Scotland for all its citizens, but to be fair, the Labour party has tried to do that for the last 100 years and look where we are.

“The solution to a better scotland, a Scotland that works for all its citizens, is independence.

“I look forward to working with Mr Rowley in an independent scotland to build the best possible place for all our citizens.”