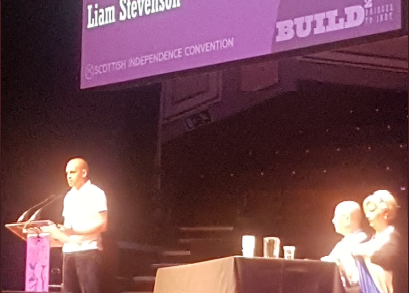 PRO-INDEPENDENCE CAMPAIGNER and co-founder of LGBTI equality campaign Time for Inclusive Education (Tie) Liam Stevenson told the Scottish Independence Convention on Saturday that another independence referendum should not be hinged on the Brexit question.

Having never been involved in politics before 2014, Stevenson organised a series of local Yes meetings during the referendum campaign in a “very working class area” in Cumbernauld.

In a speech delivered at the SIC’s Build Bridges to Indy conference at the Usher Hall in Edinburgh, Stevenson spoke of the need to engage working class people who “don’t talk politics” and make the case for how independence can benefit them.

“Brexit shows us that we should not be hingeing a second independence campaign on another major political event.” Liam Stevenson

Stevenson said: “We have a contradiction facing us within the Yes movement – Brexit.

Many of these people, Stevenson said, were working class voters, and while there are stories of those who have moved from “no to yes” since 2014, there are also those for whom the focus on the EU has been enough to turn them from “yes to no”.

“Many within the Yes movement believed that Brexit would offer a silver bullet for Scottish independence, and a lot was waged upon this ultimately false idea,” Stevenson said.

“Brexit shows us that we should not be hingeing a second independence campaign on another major political event happening – whether that is the conclusion of Brexit, another election, or something else.

“We’re wasting time by waiting for an event that may never come to springboard off.”

“Politicians will not win independence, people will.” Liam Stevenson

Instead, he argued, the focus should be on shaping a campaign that speaks to and represents a diverse range of people. “My friends and neighbours don’t respond to suited politicians,” Steven said, and neither are they convinced by “middle class activists” talking about neo-liberalism.

This, Stevenson said, is why there must be a concerted effort to get people in local communities involved in the movement. “Politicians will not win independence, people will,” he said.

Stevenson said that to achieve this, the independence campaign has to be rooted in the “acutely left-wing ideas” which attracted him to the movement.

He said: “I heard the cry of those impacted by wealth inequality, austerity, deindustrialisation and community breakdown; those who feel voiceless and unable to change their collective circumstances, and – like many then – I saw Scottish independence as an alternative from that fate.”

To progress the Yes movement from a “can do” attitude to a “will do” and “have done” nature, Stevenson said: “We need to be able to show those from the most deprived communities – those who didn’t turn out to vote – exactly what an independent Scotland can offer them.”

”When we win the working class, we win independence.”