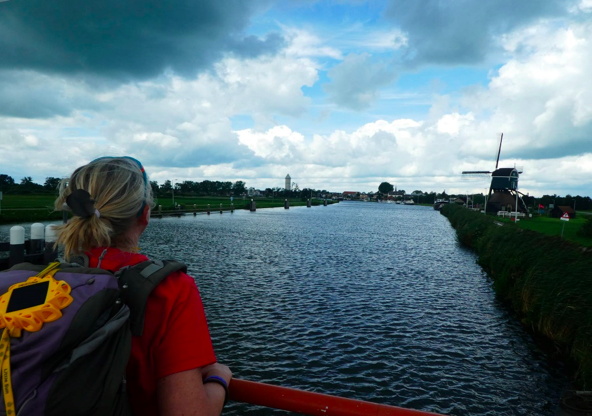 A CAMPAIGNER is walking from Scotland to Germany in protest against Brexit.

Claudia Zeiske is walking from Huntly in Aberdeenshire to Unterpfaffenhofen, near Munich, to highlight the impact losing freedom of movement when the UK leaves the EU.

Zeiske set off from Huntly square on 3 July and hopes to reach her final destination on 30 September on a walk that she has named “Home from Home”.

The only stage she hasn’t travelled by foot was the ferry crossing from Newcastle to Amsterdam.

“My main concern is the freedom of movement that British people are giving up.” Claudia Zeiske

German national Zeiske lived in London and Holland before settling in Scotland. Speaking to CommonSpace, she said: “There are many reasons why I’m doing this walk.

“My main concern is the freedom of movement that British people are giving up through this decision. It is a birth right that young people have been given, that should be protected for future generations.

“Brexit has made me very unsettled for the past year. Suddenly I am a foreigner, a migrant which is almost a bad word now.

“This walk is my personal reaction to Brexit.”

The 1,800km walk will take around 90 days, and Zeiske is being accompanied by Nick, her British husband of 25 years, on the monumental task.

Zeiske lived in London until 1990 before moving to Holland where both her children were born and she told CommonSpace she is delighted they have both Dutch and British passports.

Having taken full advantage of the European freedom of movement act by also living in France, Sweden Italy and Spain, she now believes any potential restrictions could have a negative effect on her personal life.

“My son is leaving now, like many Europeans are doing, or thinking of,” she said.

“He found a Job in Switzerland. I feel the future for young people in Britain is bleak, if we don’t find a way to U-turn, or at least smoothen the hard way.”

Zeiske also told CommonSpace that many people she has spoken to on the continent are sad the UK decided to leave the EU following the referendum in June 2016.

She said: “Talking to people in Holland, they feel they have lost and ally.

“People in Germany feel they have lost an idol, in their view Britain was always the most open, un-bureaucratic, open to everybody country – something that Germans would love to be.”

Zeiske said that although the EU isn’t perfect, her assertion is there are more benefits from having EU membership, and she also expressed her concern at the reasoning behind Brexit, she explained: “I know the bureaucrats need to be addressed. But the UK itself has become such a hyper bureaucratic concoction.

“Sadly, the UK is only and mainly thinking about economic issues and money terms, rather than all the things that the EU has enabled us to do.

“In terms of peace, human rights and the environment – when I first moved almost all the beaches were too polluted to swim in for example.”