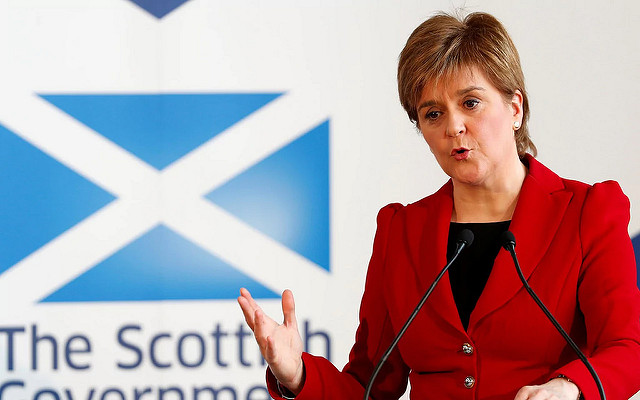 The First Minister’s initial meeting with the UK Labour leader has been described as “constructive”, but it remains to be seen if a new direction for both their parties will emerge

FIRST MINISTER Nicola Sturgeon was in Westminster on Tuesday [20 November], meeting with UK Labour leader Jeremy Corbyn and Plaid Cymru’s Adam Price as part of an ongoing campaign to avoid a no-deal Brexit.

Sturgeon’s meetings occurred against a backdrop of growing uncertainty over whether Prime Minister Theresa May’s latest plan for leaving the EU – which has aroused furious opposition from both the Tory government’s allies in the Democratic Unionist Party and Remain-backing Conservative MPs – will successfully make it through parliament.

Sturgeon has described her meeting with Corbyn as taking place “in a positive spirit”, driven by a “unity of purpose” in voting down May’s proposed deal, and figuring out a “workable alternative.” However, details of what that alternative might involve have not yet emerged.

CommonSpace spoke to activists, experts and campaign groups to find out what final outcome they hope for in the aftermath of Sturgeon’s cross-party meetings.

“It’s difficult to imagine a time in modern UK politics where such a divided government has been matched by such an equally divided opposition. Any conciliation or consolidation between Sturgeon and Corbyn would therefore strengthen their respective hands greatly.

“However, it must be understood that the spectrum of people against Brexit is broad enough that the various factions (such as Scottish Nationalists, English pro-European liberals or Rees-Mogg style Brexiteers) are likely to be as opposed to each other as they are to Brexit itself so a broad coalition looks unlikely. The future is still looking decidedly unclear.

“There is certainly scope for Sturgeon and Corbyn to make initial agreements on how to handle a post- (or pre-) Brexit General Election. I wouldn’t expect anything so radical as a non-compete pact between the two parties during an election campaign, but current polls are hinting at the possibility that an electoral pact between the SNP and Labour may be required to form a government. This should be discussed and at least opened as a possibility.

“This would, of course, have significant implications for Scottish independence should the price of such a pact be the granting of a Section 30 order to allow a second independence referendum.”

Kirsty Haigh, Scotland organiser for Another Europe is Possible

“The Tories’ Brexit agenda is an attack on everyone – especially on the poor, on migrants and on workers – and we hope that the leaders of the two biggest UK opposition parties are meeting to plan a serious strategy for how to derail it.

“We need to kick the Tories out and get a government that works for everyone, but to make that work we also need to give the people a final say on Brexit. It’s clear that Brexit will lead to further deregulation of the economy, further destroy our public services, push us into dangerous trade deals, remove environmental regulation and harm our food supply. Both parties are clear that a public vote is on the table – now we need them to campaign for it.

“The time for just talking about the dangers of Brexit and May’s deal is over. Corbyn and Sturgeon need to be building a plan to get people out all across the UK before and after the deal is defeated in parliament. They need to be using their power, resources and influence to mobilise against Brexit and the devastating consequences it will have.

“Brexit will create a Britain of racist scapegoating. We need to guarantee the rights of all the EU citizens living in Scotland, of everyone living in Scotland no matter where they are from. In a moment of political crisis, Sturgeon and Corbyn will have the power to kick back against the anti-migrant narrative, to guarantee freedom of movement and close down the disgraceful detention centres. They should use it.”

“As a movement, we hold the belief that discussions between Jeremy Corbyn and Nicola Sturgeon should lead to a conclusive decision that the only coherent and truly representative opposition to the proposed EU withdrawal agreement comes in the form of a General Election.

“Any discussion pertaining to a People’s Vote between leaders will only offer a floundering Conservative Party a get-out clause from what is an identifiably antagonistic agreement, littered with non-regression clauses that will hinder any future progressive government.

“Should an aggressive campaign in parliament from a proposed cross-party coalition for a People’s Vote continue, this will be a decision that plays further into the hands of the far-right elements of electoral politics, with polling data already identifying a resurgence of support for UKIP.

“We urge the First Minister to focus on the will of the Scottish people given in 2016 through the Scottish Parliament elections and now champion for a General Election, in which a subsequent pro-independence coalition for a second referendum can be formulated.”

“Neutral Scotland hopes that the meeting between Sturgeon and Corbyn facilitates not just productive co-operations between the two parties on Brexit, but lays the path for other issues of mutual convergence such as Trident removal, ending UK participation in the war in Yemen, and Scottish self-determination.”

“If May’s deal is rejected in the Commons – still a big ‘if’ – [and] instead of backing a People’s Vote/Remain, Sturgeon urges a ‘soft’ Brexit – i.e. if opposition parties go for it – SNP, Labour, Liberal Democrats and ‘Remain’ Tories would be complicit in Brexit, would be driving it and own it.

“The UK in the EU’s single market and customs union would be a rule-taker extraordinaire, facing a much bigger democratic deficit than even Norway, with EU decisions from trade to environment to financial services taken without the UK having a vote.

“’Soft Brexit is not a compromise – Remainers and Brexiters alike can agree that giving up a seat at the table, vote [and] voice is unsustainable and damaging. If May’s deal is defeated in the Commons, it’s the big chance to stop Brexit – not to be complicit in it and make it happen.

“Nicola Sturgeon spoke at the huge People’s Vote march in October (by video). Tory Remainers and Liberals would back a people’s vote over ‘soft’ Brexit; so should SNP, given it’s their declared preferred option to stay in the EU (for Scotland and the UK).”