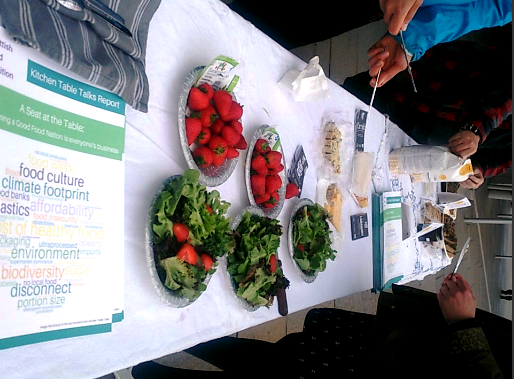 THE SCOTTISH FOOD COALITION has stepped up its calls for the Scottish Government to start consulting on legislation to ensure a healthy, environmentally and economically sustainable food system before the parliament’s Summer recess.

The coalition, which consists of 19 organisations, set up a kitchen table and chairs outside the parliament at 12.30 today (23 May) to highlight the issue.

This coincides with the launch of the coalition’s new consultation report, which heard from 800 people across Scotland and lays out the most commonly suggested actions which the Scottish Government should take to “transform the food system”.

The Scottish Government announced in its 2016 and 2017 programmes for government that it would consult on a ‘Good Food Nation Bill’. The Food Coalition says the consultation must begin as a matter of urgency, and is calling on supporters to write to First Minister Nicola Sturgeon to turn up the pressure.

Scottish Food Coalition Coordinator Amabel Crowe said: “With over 800 people participating in the Food Coalition’s Kitchen Table Talk engagement, it’s clear that there is public appetite for a national conversation on what it means to be a Good Food Nation.

“Never has there been a timelier moment to introduce law – food sits at the heart of Scotland’s biggest challenges, from food insecurity to poor health, from worker rights to our warming climate.”

Crowe stressed that the need for a “world leading Food Bill” impacts on some of the most vulnerable people in Scotland, and that the government must listen to “the families relying on food banks, the people with chronic health conditions, the workers and the farmers who feed Scotland”.

The Food Coalition’s consultation, which was carried out through ‘Kitchen Table Talks’, found that the top concerns raised were the affordability of a healthy diet, the environmental impact of our food system, disconnect from the origin and value of food, food waste, and plastics and packaging.

With this in mind, the top actions people recommended for the Scottish Government were to facilitate local food economies, for example, through regulation, subsidies, and investment in infrastructure; invest in education and skills training for all ages, including growing and cooking food and understanding nutrition; and make all food production sustainable through incentives and regulation.

Robin McAlpine, director of Common Weal, one of the Food Coalition’s member organisations, said that food was “one of the most political conversations people have in Scotland”.

“There are widespread and very strong views about how our food system should be improved for our health, for our economy and for our quality of life among many other things.

“It really is time that the Scottish Government pressed on with the Good Food Nation Bill to start the process of getting public policy catch up with the hopes and aspirations of the Scottish public,” he said.

Lorraine Tulloch, programme lead for Obesity Action Scotland said the consultation had “reinforced how important it is that we improve the accessibility and affordability of a healthy diet” and said legislation was necessary to address these issues.

Dave Watson, head of policy and public affairs at Unison, said the union wanted to see “a food system based on the principles of social and environmental justice, with public services leading by example”. For this reason, he said, the consultation “must start soon and be well thought out and inclusive”.