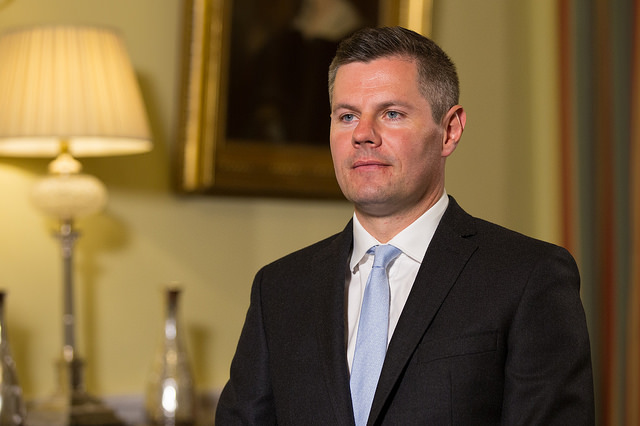 WHEN THE SCOTTISH BUDGET is presented before Holyrood on Thursday, laying out the Scottish Government’s spending plans for the coming year, it is widely expected that Finance Secretary Derek Mackay will increase the Scottish rate of income tax for higher earners, a possibility which may include the creation of extra tax bands.

So yes, we’re getting into tax jargon here, but bear with us. Basically, if the Scottish Government raises taxes, it collects more money from taxpayers which it can then spend on public services. So far so good.

However, it’s not quite that simple for Scotland. In fact, because Scotland is part of the United Kingdom, raising taxes here may not make any difference at all to spending on public services. Why? Well, let us explain.

Cuts to the Scottish block grant

The block grant is the amount of money Westminster gives to Scotland to get by. It’s our pocket money, if you will, to spend in certain devolved areas. But one expert – Russell Gunson from the Institute for Public Policy Research (IPPR) – has warned that raising income taxes in Scotland may only just be enough to balance out a cut to the block grant. So, in other words, Scottish taxpayers may have to pay more income tax just to fill a budget gap left by Westminster. This means Scottish people could end up paying more income tax just to keep public services exactly as they are now.

“Scotland is facing a really difficult budget this week, with further cuts to the Scotland block grant,” Gunson said. “The Scottish Government has started a debate on tax, and is clearly considering increasing income tax. However, tax rises alone are unlikely to end the cuts we face for long.

“Any increase in tax may only buy us a year or two of protection from cuts on this scale. Either we will need to see further tax rises over the coming years or find ways to deliver a significantly stronger Scotland economy, and increase tax receipts.”

Regarding Thursday’s budget, a Scottish Government spokesperson argued: “The UK Government is cutting our discretionary block grant by £2.6bn in real terms over the 10 years to 2019/20.

“Following a careful and considered conversation around income tax, we will publish a balanced package of tax and spending proposals as part of the draft budget.”

These remarks echoed those made by Derek Mackay and First Minister Nicola Sturgeon in the aftermath of the UK Treasury’s autumn budget, when Sturgeon said that Chancellor Philip Hammond’s promise of a £2bn increase for Scotland “is accurately described as a con”.

While a Scottish Parliament report on the autumn budget acknowledged that the Scottish block grant would increase in cash terms over the next two years, it also noted that, with inflation taken into account, this would result in a mere 0.1 per cent increase over 2018/19, and a 0.1 per cent decrease the following year.

The Scottish Government’s revenue budget itself, as the first minister has repeatedly highlighted, will fall in terms of day-to-day spending by £199m in real terms across 2018/19, and £320m in 2019/20.

During First Minister’s Questions following the autumn budget, after Scottish Conservatives leader Ruth Davidson argued that Sturgeon should “spend a little less time complaining about where the money is coming from and a bit more time thinking about the positive things that she can do with it”, Sturgeon replied: “I invite Ruth Davidson to tell us where she thinks we should take that £200m from? Should it be taken from the health service or education?”

The fact that £1.1bn of the increase pledged to Scotland by Hammond comes from financial transactions funding – i.e., money for projects based on loans and equity – has also been a source of controversy, with Mackay describing it as “money with strings attached,” and Sturgeon arguing that such funding “can’t be used to support day-to-day spending on public services” and “has to be repaid by the Scottish Government to the UK Government”.

So, yes, budgets and finance are technical, complicated and probably make a good insomnia cure, but the long and the short of this is that although the actual amount of cash given to Scotland by Westminster might increase, the value of that cash keeps dropping. It’s a bit like when we all think back to how cheap things used to be – a kid 10 years ago would get a lot more for a pound’s pocket money than a kid in 2017. We’re in the same territory here – the Scottish Government can’t make the budget stretch far enough to cover the same services – to pay for the same stuff – if the value of the money is changing.

Added to this is the fact that, due to post-Rrecession UK spending cuts and the knock-on effect on Scottish budgets in recent years, there has already been a real terms cut in funding to the Scottish Parliament of £2.9bn since 2010.

With these unfavourable circumstances as a backdrop, the Scottish Government has nevertheless pledged to raise NHS spending and inflation-proof police funding. Other, ‘non-protected’ areas overseen by the Scottish Government – such as councils, transport and further and higher education – could potentially face cuts of £1.3bn per year, or a 10.4 per cent cut to such government portfolios over the course of two years.

In its analysis, the IPPR believes the Scottish Government will have £700m less available for day-to-day spending by 2019/20 than it has today. Derek Mackay is widely expected to increase the Scottish rate of income tax for the better off next year, possibly by creating extra bands, but it is expected this would only raise around £300m.

Increasing the possibility of cuts to ‘non-protected’ areas is the Scottish Government’s long-standing commitment to mitigating Tory welfare cuts in Scotland.

And although Leonard has floated the idea of a windfall tax upon the wealthiest one per cent of Scots, existing Scottish Labour tax plans would raise little more than the income tax rise expected from this week’s budget.

On Tuesday evening, the Scottish Government published a paper regarding the potential impact of increasing the income tax rate on those earning above £150,000 per annum from 45 per cent to 50 per cent. Two of the models explored by the paper posited increasing the additional rate (AR) on such earners.

The report argued that “there is therefore likely to be a revenue and policy risk associated with increases to the AR that result in a substantial divergence with the equivalent rate in the rest of the UK”. This means that the government is worried that a higher rate for tax for high earners in Scotland, but not in the rest of the UK, could create fresh problems, like putting people off living in Scotland – although, experts are divided over how likely this is.

This further adds to the possibility that Mackay may be restrained in announcing any rise in income tax.

However, due to the SNP’s minority status as a government, it will need the support of another Holyrood party in order for the budget to pass.

Scottish Green co-convenor Patrick Harvie told his party conference in Edinburgh this October: “Let’s cut tax for low earners, and reduce inequality. Greens are clearly leading the change on tax policy. We have a very clear message for the Finance Secretary. This is the only way you’ll get Green support for the budget.”

To what extent such demands will affect the eventual Scottish budget remains to be seen.

What else you can expect from the Scottish budget

The Scottish Fiscal Commission will publish its initial forecasts for the Scottish economy alongside Thursday’s budget, which will inform any subsequent negotiations and redrafting.

Despite warnings from the Scottish business community that they are generally negative about any rise in Scottish taxes, Mackay has said that his budget will protect the economy and support business.

Details may emerge of precisely how much of a pay rise workers can expect following the Scottish Government’s policy of lifting the public sector pay cap, as well as significant pressure from the trade union movement to go further and faster.

Many in the Scottish arts sector expect cuts to Scottish arts funding, despite widespread opposition, including an open letter signed by over 100 of Scotland’s most notable writers condemning any further cuts to the sector.

Local authorities in Scotland have argued they require an additional £545m to maintain services, and they are unlikely to be satisfied with tomorrow’s budget. Should negotiation with the Scottish Greens take place, a similar deal as last year, when the Greens secured £160m for local authorities, may take place.

As ever, we’ll be bringing you the latest news and analaysis on budget day, so stay tuned to CommonSpace to keep yourself in the know.