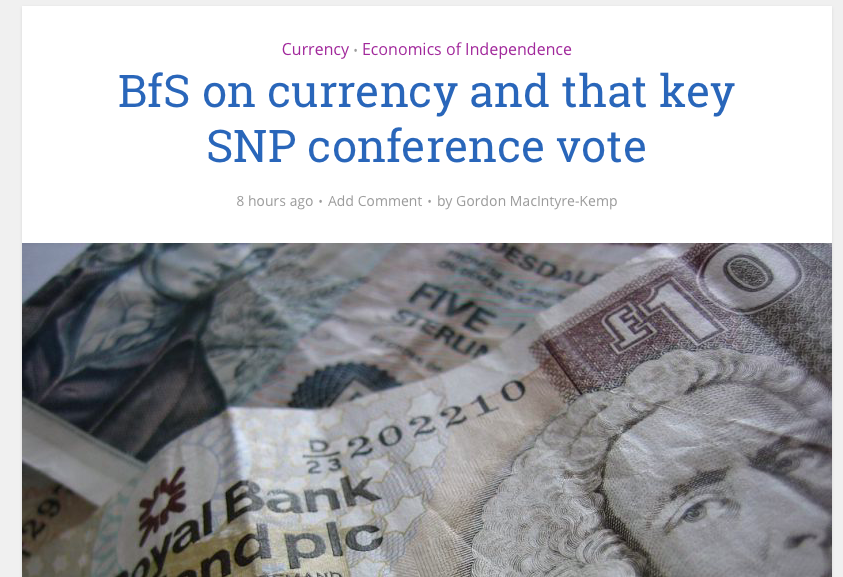 Gordon Macintyre-Kemp of Business for Scotland: “The Scottish Parliament should have the power to make the change when the time is right and that means that the SNP’s six tests are not flexible enough”

THE pro-independence think-tank Business for Scotland has come out against the controversial six tests for establishing a Scottish currency proposed by the Growth Commission report, on the eve of a crucial vote on the issue at SNP conference.

An SNP leadership motion putting forward a tweaked version of the GC report’s economic proposals for Scottish independence will be debated on the first day of the party’s spring conference, with amendments proposed to the motion which seek to scrap the six tests.

The tests would see an embryonic Scottish Central Bank assess the case for a Scottish currency on an annual basis premised on criteria including meeting fiscal targets and securing billions in foreign exchange reserves.

Under the motion, proposed by deputy leader Keith Brown and Finance Minister Derek Mackay, there would be a vote in the first term of the Scottish Parliament on whether to establish a Scottish currency or continue to use pound Sterling with no formal shared institutions with the Bank of England, which would be “guided” by the six tests.

READ MORE: Analysis: With just days until the vote, a defence of the economics of Sterlingisation has still not come

Writing on the Business for Scotland website earlier today [26 April], Chief Executive of BfS Gordon Macintyre-Kemp said that he believed “an independent Scotland should have a sovereign currency at the time most in line with the economic and social wellbeing of the nation”.

He added: “Flexibility is key in this approach, the Scottish Parliament should have the power to make the change when the time is right and that means that the SNP’s six tests are not flexible enough.”

Macintyre-Kemp went on to say that although he thought the motion was “not perfect”, he “hoped the SNP’s revised stance was adopted by the SNP conference this weekend”.

The recently established Campaign for an Independent Currency has been campaigning for the scrapping of the six tests, with CIC representative and former MP George Kerevan stating that: “The sovereign will of the Scottish people and Parliament should be the ones to make decisions on our currency to benefit our economy.”

The six tests in full are fiscal sustainability, Central Bank credibility and stability of debt issuance, Supporting the needs of households and businesses, sufficiency of foreign exchange reserves, fitting Scotland’s trade and investment patterns internationally, and proving that an independent Scotland’s economy was de-linked from the rUK economic cycle.

Common Weal head of policy & research Dr Craig Dalzell published a paper in June last year which found that each of the tests would “act against” establishing a currency, comparing them to Gordon Brown’s five tests to join the Euro in 1997 as UK Government Chancellor, which was widely seen as a mechanism to avoid joining the new EU currency.

Meanwhile, Kirsty Hughes, Director of the pro-EU Scottish Centre on European Relations (SCER), has argued that Sterlingisation would make EU membership difficult, due to “divergence” with the EU rulebook.

Writing on SCER’s website on Friday, Hughes said: “Scotland would also be unlikely to get any opt-out from the euro, so it would have to commit to eventually joining the euro (although once in the EU, this process could be put off indefinitely). But the currency debate comes to the fore here. If Scotland had kept the pound sterling, but the UK was outside the EU, then Scotland would not be able to demonstrate that it could commit to join the euro at some indefinite future point. Nor – if it took up to a decade to adopt its own currency – could it show that as a member state it would use its independent monetary policy to target price stability and make its exchange rate a ‘matter of common concern’ with other member states (as required by the EU’s Lisbon treaty). So this would be a significant political challenge.”

The Growth Commission plan also came under fire at First Minister’s Questions on Thursday, when Scottish Greens co-convenor Patrick Harvie criticised the economic model, saying it would make it “impossible” for Scotland to deliver a Green New Deal, a huge public investment programme in green infrastructure backed by the Scottish Parliament on Wednesday and supported by Nicola Sturgeon in a speech to the STUC last week.

Advocates, including Sturgeon, Mackay and National editor Callum Baird, have argued in recent weeks that the GC currency plan offers the best chance of convincing undecided Scots of the case for independence.