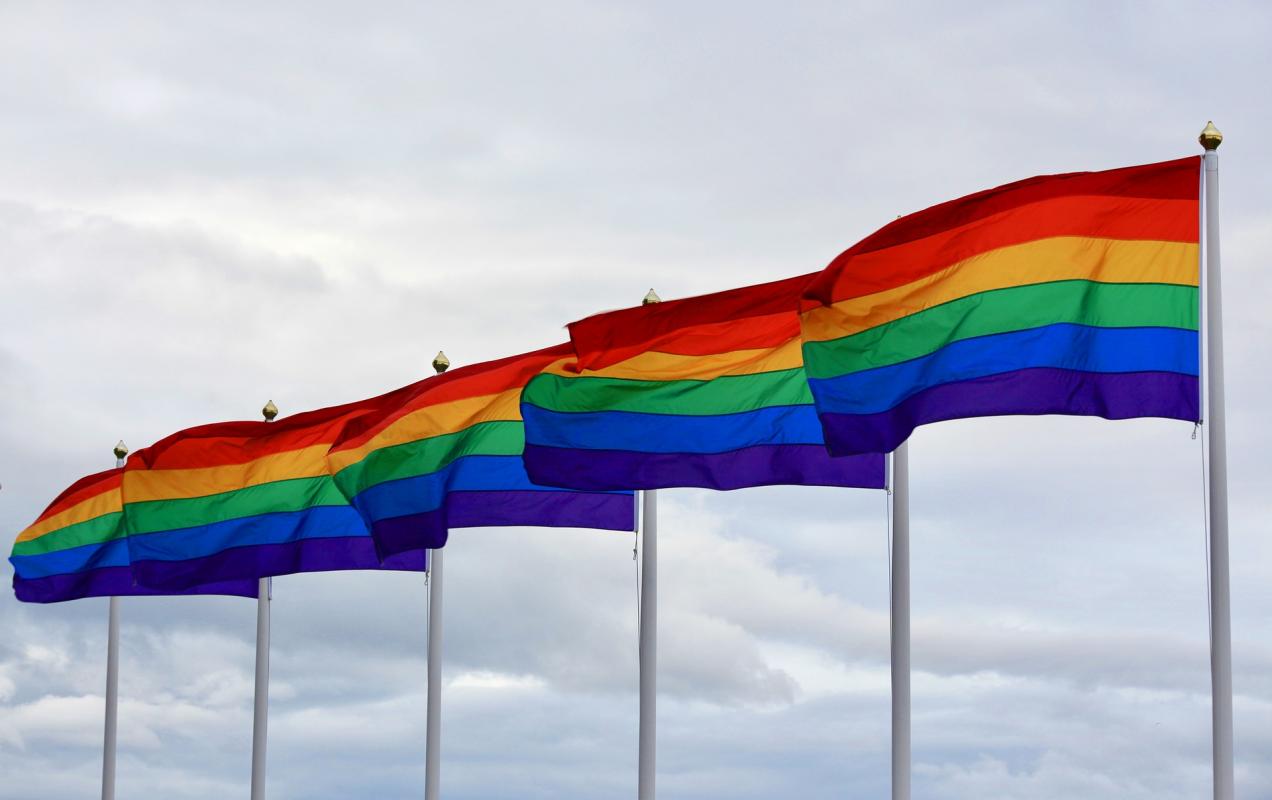 WHAT’S IN a name? Thus goes the age-old question to which the answer has always been: quite a lot, whether you like it or not.

How we identify ourselves and are identified by others is a significant feature of our existence as humans. Unlike the rest of the animal kingdom, humans are defined by our ability to communicate complex ideas and to think introspectively and analytically about our place in the world.

For some people, answering those questions is easier than for others. For some, these questions will be answered for them and they will be denied any chance to define themselves, express themselves, be themselves. Figuring out who you are and where you belong can be a struggle at the best of times, but this becomes a far more significant issue if the people or institutions around you are determined to place oppressive limits on how you live your life.

LGBTQ+ (Lesbian, Gay, Bisexual, Transgender, Queer +) people have experienced this kind of systematic, cultural denial more than most. It was only 18 years ago – when I was 11 years old – that the law banning teachers from talking about same-sex relationships was overturned in Scotland.

Today, there are still 71 countries around the world where sex between two men is illegal and 44 which explicity criminalise sex between two women. In 15 countries, transgender people are targeted by laws banning “cross-dressing”.

So when we talk about “labels” and the need for what might seem like an ever-extending acronym representing the queer umbrella, this is really what it all boils down to. People want to be able to identify themselves openly, and officially, in the way that feels right to them, and to not be told by others that their identity is “wrong”, “weird” or simply “nonsense”.

LISTEN: Pride – How the past can shape our future

This is a basic level of social acceptance for which, I think, most of us would hope. But for those who have had their identity attacked or undermined in the past, this simple affirmation can be life changing, and even life-saving.

This, I thought, was an idea that Scotland had collectively, if gradually, agreed upon — at least as far as sexual orientation was concerned. It was just last year, after all, that Scotland became among the first countries in the world to introduce statutory LGBT-inclusive education in schools. But it seems the road to progress is not linear and the door that was closed behind you can always be opened again.

In a reflection of the progress which has taken place on LGBT rights in Scotland over the last decade, the 2021 Census will, for the first time, include questions on sexual orientation amd transgender identity. The questions will be optional, but they will aim to gather reliable data which can be used to plan services and support high level knowledge and understanding of the different population groups which exist in Scotland.

An added bonus of this is that people who have historically been ignored by the Census – as though they didn’t exist, or it wasn’t quite appropriate to mention them (least of all encourage them) – will finally be able to tick a box and say “I won’t be kept hidden any longer”.

So far so good? Well, apparently not.

An article published in The Sun last week expressed the newspaper’s customary shock and awe that the Census question on sexual orientation was going to include 21 options for people to choose from.

Of course, the first problem with this was that it wasn’t quite accurate. The Census question will include four options: straight or heterosexual, gay or lesbian, bisexual, and other. For anyone selecting the “other” option, there will be a write-in box which means the people analysing the data can gather more detailed information than the word “other”, without context, would provide.

Within that box, if someone starts typing the letters of one of 17 suggested words, the word will appear as an autocomplete option for the respondent to select. The words proposed by National Records of Scotland, which creates and administers the Census, are based on the words most often written in to sexual orientation questions in surveys. These include “queer”, “questioning”, “fluid”, “asexual”, “demisexual” and “pansexual”.

It’s entirely unsurprising that The Sun – and the spokespeople from the evangelical Christian Institute, the Catholic Church and the Scottish Conservative Party who are quoted in the article – find all of this outrageous. In fact, if that were the only source of the backlash, it wouldn’t be particularly concerning at all.

What is alarming is that SNP MSP Joan McApline, convener of the committee on culture, tourism and external affairs (which is responsible for scrutinising the proposed changes to the Census), has been leading the charge against these seemingly preposterous autocomplete options.

For example, McAlpine expressed concern on Twitter that “demiromantic is not a sexual orientation” and that “skoliosexuality – without any scrutiny at all – is suddenly mainstream”.

The Sun story led to a mixture of anger and mockery from some sections of the internet, as well as certain well-known columnists, over the idea that people could choose to identify in such varied and obscure ways.

But while much of the focus has been on whether or not these specific options are appropriate, silly, made-up (insert adjective here), all of this is really a bit of a distraction. With or without the autocomplete options, people would still be able to write those answers into an empty box, if one is provided.

On this basis, the letter states that the committee is “seeking clarification of [the NRS’s] understanding of the interaction between the Equality Act 2010 and the Census Order”.

Put simply, the argument being made is that because the Equality Act seemingly offers only three options for what “sexual orientation” means, it would clearly be wrong to allow for any additional options to be recorded in the Census.

Who knew when we were celebrating the fact that the Equality Act was pushed through in the nick of time before the Tories were elected to government again, that a decade later it would be bandied about like a holy scripture written in sacrificial blood — as though anything which isn’t stated unequivocally in the Equality Act can never, should never, will never be permitted.

READ MORE: Gemma Clark: Take Pride from our history – be proud of ourselves

That anybody calling themselves a progressive would cite the fact that equalities legislation doesn’t mention a particular group of people as evidence that we should never aspire to be more inclusive and supportive of those people is truly sad.

McAlpine has insisted that her motive in all this is ensuring that data intended to “identify discrimination and deliver services for gay people” will not be undermined.

She said: “If you add predictive text alternatives in the sexual orientation question […] you do not record info about gay people and the state then misrepresents sexual orientation as a personal peccadillo – which is insulting and dangerous.”

The way in which this is worded would almost lead you to believe that the NRS was suggesting not including the first three tick box options, because otherwise it simply makes no sense to say that information on gay people would not be recorded.

In fact, LGBTQ+ organisations support the inclusion of an “other” option, arguing that as many as 10-20 per cent of their stakeholders do not identify with the three main answers.

This is not a fact which is likely to be surprising to anyone who has any familiarity with what might be described as the “LGBTQ+ community”. So how, exactly, is that population well-served by ensuring that the first effort to ever record it in official statistics is inaccurate and incomplete?

READ MORE: Olivia McMahon: I was bullied at school and felt like an outcast – but now I’m proud to call myself an LGBT inclusive-education activist

How is the state doing its job in gathering information on its citizens if it doesn’t ask questions in a way that people are comfortable with answering? The sexual orientation question is voluntary, so if people don’t like the options available, they simply won’t answer.

And how, after years of struggling to be accepted and allowed to live their lives honestly and openly, is it appropriate to tell a marginalised group of people that they still have to define themselves with words or experiences that don’t feel right to them?

In Scotland, the question of self-determination, or autonomy, is typically high on the agenda. Broken down, the word “autonomous” literally means self-named, or self-defined. This is a concept inextricably tied to the broader ideal of making your own decisions and determining your course.

If this principle is important in the political context, it is still more important in the personal. In fact, the two are endlessly intertwined. People’s ability, their right, to say who and what they are without censure is politically powerful and deeply personal all at once.

Allowing people to write in their own sexual orientation in the Census might seem trivial, but for the people it affects it could be the difference between making them feel stigmatised and alienated, or sending them a message that they, too, are worth recording as part of the present and future history of Scotland.

This is no threat to gay people. Nor is it a threat to bisexual people, who are also included in the three main options but often excluded, sometimes intentionally, from these debates. The right to identify one’s own sexual orientation, rather than have it enforced by others, has been at the heart of the “gay rights” movement.

It is those who seek to challenge that principle of self-determination now who pose the greatest danger to our hard-won rights.