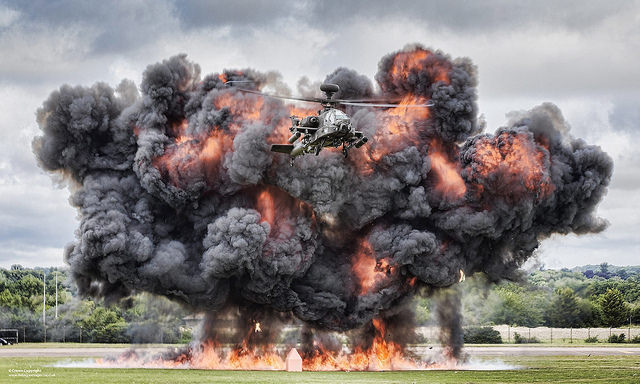 A NEW parliamentary report published today by the House of Commons Defence Select Committee has called for a significant hike in funding at a cost of £20 billion per year, a figure described as “staggering” by the SNP’s CND convenor, Bill Ramsay.

Ramsay told CommonSpace that the call for an increase in Defence expenditure to three per cent of GDP was about “military expansionism”, and said all Scottish MPs must oppose it.

“The sums involved are staggering, proportionately much more, for instance, than Prime Minster May’s expenditure plans for the NHS,” Ramsay said.

On Sunday [17 June] May announced plans to increase NHS spending by an extra £20bn from 2023, the same proposed figure the select committee report advocated for the Ministry of Defence, a department which is a much smaller part of the annual budget than the NHS.

Ramsay added: “It’s a plea from the members of the Westminster Defence Select Committee to make Britain militarily great again and the military expansionism it promotes should be opposed tooth and nail by every Scottish Westminster politician.”

The ‘Beyond 2 Per Cent’ report, published today [18 June], criticises the “failure to sustain the military on a sustainable basis,” and particularly the lack of sufficient personnel and equipment.

Currently spending sits at just above 2 per cent of GDP but the Commons Defence Committee said this should rise to 3 per cent to fill “black holes” in MoD finances and counter the threat posed by states like Russia. The committee believed a lack of vehicle-mounted anti-tank weaponry leaves them vulnerable to being “outgunned” by the Russian state in any future conflict.

The call for higher Defence spending follows on from demands by the United States last year that other North Atlantic Treaty Organisation (NATO) member countries start paying more on defence, otherwise the US may consider their own commitment to the alliance.

The US defence secretary, Jim Mattis, visited NATO’s Brussels headquarters in February last year and warned: “America will meet its responsibilities, but if your countries do not want to see America moderate its commitment to the alliance, each of your capitals needs to show your support for our common defence.”

Almost all of the NATO member states marginally increased their spending in 2017 but, ahead of US President Donald Trump’s visit on 13 July, the increases proposed in the defence select committee report would be far in advance of European neighbours, with Greece currently the highest Defence spender at 2.4 per cent of GDP. The US spends 3.6 per cent of its GDP on Defence.

There has been a ratcheting up of tension between the UK and Russia following the poisoning of Sergei and Yulia Skripal. In the immediate aftermath, prime minister Theresa May placed economic sanctions on Russia and expelled 23 of 58 Russian diplomats.

Martin Docherty-Hughes MP, SNP member of the Defence Select Committee, did not challenge the proposed increase in spending on Defence, but said the report showed up UK Government incompetence on Defence issues, which he described as “a culture of chaos”.

Docherty-Hughes stated: “It is clear from the evidence the Defence Select Committee has seen that the £20billion black hole in the Ministry of Defence budget is the result of a culture of chaos, which has seen procurement decisions made without any regard as to how they would be fully funded.

“The Defence Committee report also adds to the weight of evidence that the out of control Trident budget is putting an unbearable strain on the conventional defence budget, which always loses out when ever more money is needed for nuclear weapons. We must prioritise our conventional defence forces, and ensure they have the equipment and support they need to do their job.”

Keith Brown, the Scottish Government’s economy secretary, said the report underlines “significant financial pressures” on the armed forces and said he would ask UK ministers for assurances about spending in Scotland at a meeting this week.

“Scotland has previously suffered brutal cuts to both military personnel and bases, with a further eight defence sites due for closure under MoD’s ill-conceived basing plans. I have repeatedly called on the Secretary of State for Defence to ensure that the on-going Modernising Defence Programme (MDP) will not result in further cuts in Scotland and that previous promises to base 12,500 regular armed forces personnel in Scotland by 2020 be honoured.”‘