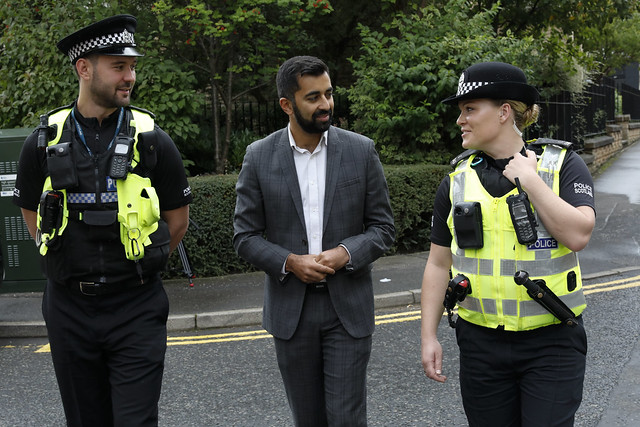 POLICE SCOTLAND “have not applied the legislative duties contained within the Equality Act and the Human Rights Act”, the Call It Out campaign have argued, following the launch of a Scottish Government consultation on new national priorities for policing in Scotland.

The consultation aims to establish priorities which will set the long-term framework for Police Scotland and the Scottish Police Authority, and are being updated “to reflect significant developments and progress in operational delivery, emerging threats and the changing needs of communities”, as well as anticipating future demands on the service, according to the Scottish Government.

Commenting, Justice Secretary Humza Yousaf said: “We are well served by the police, who have contributed to falls in crime and violent crime. We want to ensure that the strategic direction we set for the police service reflects the issues which are important to people and our communities.

“This review of the Strategic Police Priorities will ensure Scotland’s police service continues to grow and develop, and I encourage everyone to have their say by taking part in the consultation.”

Scottish Police Authority chair Susan Deacon added: “The Scottish Government’s Strategic Police Priorities play an important role and inform the direction and delivery of policing in Scotland. It is critical that the priorities reflect the issues that matter to communities and also support the continued development of a police service that tackles crime, responds effectively to changing demands and builds trust and confidence in the service.”

This re-examination of policing priorities has been welcomed by the Call It Out campaign, which works to combat anti-Catholic prejudice and anti-Irish racism in Scotland. The group has argued that Police Scotland has failed in its duties with regard to human rights and equalities.

“A policing approach which is based firmly on equalities and human rights would result in communities, such as the minority Catholic/Irish Catholic community, being protected from the bigotry and racism to which they are subjected to.” Call It Out spokesperson

Speaking to CommonSpace, a spokesperson for Call It Out commented: “A strengthened focus on their duties under the Equality Act is precisely what is needed for policing in Scotland in 2019 and beyond.

“To date, Police Scotland have not applied the legislative duties contained within the Equality Act and Human Rights Act to proactively protect the Catholic and Irish communities from hate incidents which have culminated in a series of hate crimes. This represents a direct abrogation of their legal responsibilities and in itself constitutes a form of indirect discrimination under the Equality Act 2010.”

Under the six new Strategic Policies Priorities announced with the launch of the consultation, equality and human rights fall under ‘crime and security’, and will be within the consultation’s remit.

The Call It Out spokesperson continued: “A policing approach which is based firmly on equalities and human rights would result in communities, such as the minority Catholic/Irish Catholic community, being protected from the bigotry and racism to which they are subjected to all year round and would, most certainly, see an end to the annual hatefest organised by the Loyal Orders which is a blight on the  lives of all citizens.”

Controversy over Orange Walks in Scotland was reignited this month, after a video emerged of a woman being accosted and spat at by members of a band participating in the annual Battle of the Boyne parade on 6 July. The Grand Orange Lodge of Scotland have reportedly launched a probe into the incident, with a spokesperson confirming: “We have already contacted one band from the parade on Saturday and that has led to the expulsion of at least one member.”

The Scottish Government has also been urged to use the consultation as an opportunity to address “structural problems”, as well as heed warnings over accountability and potentially illegal data-gathering by Police Scotland.

Dr Nick McKerrell, lecturer in law at Glasgow Caledonian University, told CommonSpace: “The problem with the Scottish Government’s policing priorities is that they both miss the continuing structural problems in the national police force and the serious substantive issues.”

“The absence of local accountability a continuing issue since the launch of Police Scotland in 2013 is still ongoing and not a priority for the government.” Glasgow Caledonian lecturer in law Dr Nick McKerrell

“For example, the intransigence the Government have to an open inquiry into undercover policing in Scotland means this serious issue is unresolved and a festering problem. Not mentioned in the priorities.”

A review of undercover policing conducted by Her Majesty’s Inspectorate of Constabulary in Scotland (HMICS) was criticised earlier this year, after being accused by a report from the Scottish Campaign Opposing Police Surveillance (SCOPS) of failing to examine claims of unlawful behaviour, as well as potential police involvement in the blacklisting of trade unions.

Following the ‘spycops’ scandal, SCOPS has advocated a public inquiry be held in Scotland, in a similar fashion to the Undercover Policing Inquiry (UPI) in England.

Dr McKerrell continued: “Also, Police Scotland have stated their commitment to introduce the potentially illegal use of cyber kiosks and download private information from thousands of Scottish citizens’ mobile devices and laptops. This is despite the opposition of senior legal counsel and the Scottish Parliament’s Justice Committee. Again the Government are content to sit back and let this happen.

“The absence of local accountability a continuing issue since the launch of Police Scotland in 2013 is still ongoing and not a priority for the government. As a society, we can’t pretend all is well in policing now and move on and the priorities should reflect this.”