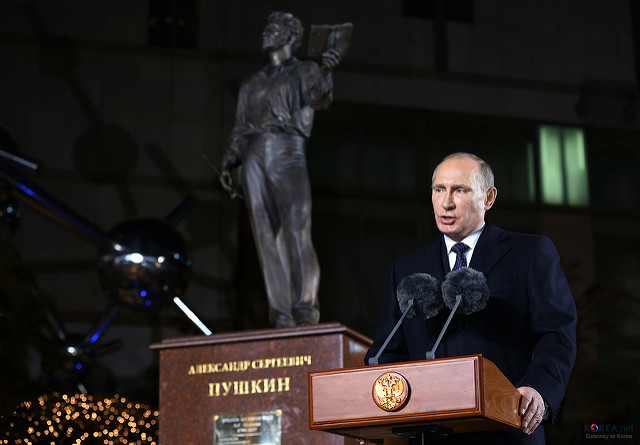 There should be “complete transparency” over corporate lobbying in Scotland, a leading transparency campaigner has argued, after Sir Angus Grossart, chair of the secretive lobbying firm Charlotte St Partners, was presented with a high honour by Russian president Vladimir Putin.

Grossart, who is a former vice-chairman of RBS, collected the award on Sunday in Moscow from Putin personally, saying it was “great and unexpected honour”, and spoke of his attachment to Russian culture and the connections between Russia and Scotland.

He received the Medal of Pushkin “for his contribution to strengthening peace, friendship, cooperation and mutual understanding between Russia and Great Britain”, according to Russia’s UK Embassy.

Grossart faced political controversy in 2017 when it was revealed he had invited US President Donald Trump’s former strategist, far-right figure Steve Bannon, to address a private gathering of the think tank Scotland International Ltd.

Commenting on Grossart’s acceptance of the award, Willie Sullivan, director of Electoral Reform Society and a member of the Scottish Alliance for Lobbying Transparency, pointed to the development as an indication of the need for greater transparency in Scottish politics and lobbying.

Sullivan told CommonSpace: “If anyone was to ask in what  circumstances could you imagine where the government would be obliged to act to open up to complete transparency the world of Scottish corporate lobbying, It might be where President Putin gives a high profile award to a multi-millionaire Scottish banker who also chairs Scotland’s most influential and secretive lobbying firm that refuses to publish its client list, and had a senior staffer [Andrew Wilson] chair The Scottish Government’s Growth Commission repot on future economic strategy.”

The link between Charlotte Street Partners and the SNP’s Growth Commission, published earlier this year, first aroused controversy in 2016, when Andrew Wilson, who is a founding partner of CSP, was first tasked with chairing the commission.

Charlotte Street Partners have faced criticism over their access to senior Scottish politicians and their closely-guarded client list. Following a report by the Scottish investigative journalist platform the Ferret, the firm has lobbied on behalf of Rupert Murdoch newspaper in Scotland. Labour MSP Neil Findlay commented at the time that Charlotte Street Partners “epitomise the emerging ‘New Establishment’ in Scotland, with its cosy links and associations between lobbyists, their often secretive and unknown-clients and Government.”

Concerns were raised about Wilson’s double role of policy adviser and corporate lobbying head by a number of campaigners, with Dr Will Dinan of Spinwatch saying that some “will rightly worry about potential conflicts of interest between his commercial work and policy influence.”

Wilson has argued that the “badge” of corporate lobbyist is “completely unfair”.

In addition to his position with Charlotte Street Partners, Grossart chairs the merchant bank Noble Grossart, which on its website states has “a range of interests abroad”, and has an estimated net-worth of £250m, according to the Herald newspaper.

Following the announcement that the Scottish businessman would be honoured with the Pushkin Medal for unspecified contributions to the arts, Grossart faced fresh rebukes from a number of Scottish political figures, with a spokesperson for the Scottish Conservatives telling the Herald: “After everything the Russian state has been responsible for in recent times, it would be regrettable if our leading business figures indulged Vladimir Putin by accepting awards like this.”

The Medal of Pushkin, named for the Russian poet Alexander Pushkin and established by presidential decree in 1999, is officially awarded to citizens of the Russian Federation who have worked for at least 20 years in their respective fields for contributions and achievements to art, culture, education, literature and the humanities, with a particular focus on Russian cultural heritage. However, the Medal has also been awarded to individuals from over 70 other nations in the past.

Also in attendance was Ramzan Kadyrov, the unelected strong-man leader of the Chechen Republic, whose reign has reportedly involved the use of state-sanctioned force disappearances and torture to an extent the campaign group Human Rights Watch have characterised as crimes against humanity.

Noble Grossart, Charlotte Street Partners and the Russian Consulate in Edinburgh did not respond to requests for comment from CommonSpace at the time of publication.

Picture courtesy of the Republic of Korea