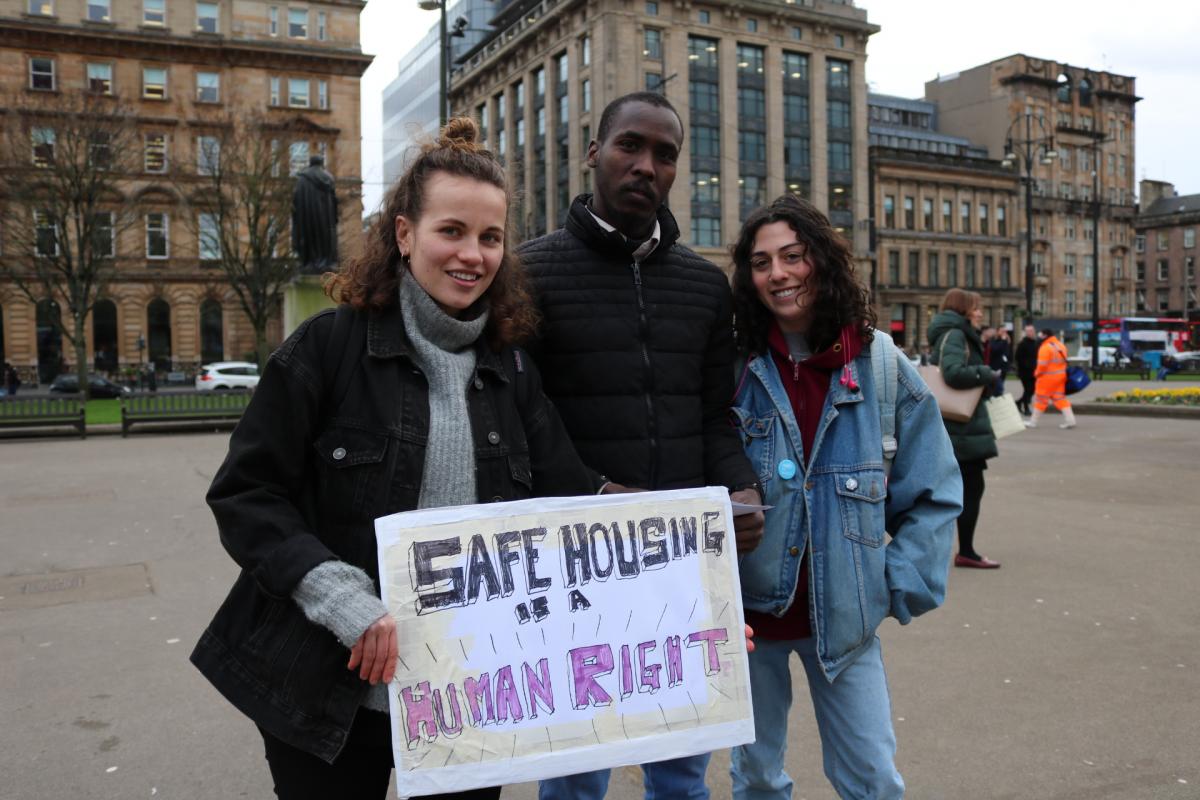 A HOUSING and human rights charity has called on housing associations and landlords to take measures to prevent Serco from changing the locks on asylum seekers, as fears grow that hundreds of asylum seekers could face destitution in Glasgow following a court verdict on Friday [12 April].

The Court of Session in Glasgow ruled that lock-change evictions by Serco are not incompatible with the Human Rights Act because asylum seekers have a right of appeal to the First Tier Tribunal (Immigration and Asylum) against a decision to terminate their accommodation.

The case was brought against Serco and the Home Office by Govan Law Centre on behalf of Kurdish Iraqi national Shakar Ali and a Kurdish Iranian national Lana Rashidi – both of whom were threatened with eviction from their Serco-owned homes in July last year, when Serco announced a new policy of changing locks.

In the court case, Rashidi stated that the stress of threat of eviction from Serco caused her to suffer a miscarriage last year, and she now suffers from post-traumatic stress disorder.

The call for non-legal methods to prevent evictions was made by Positive Action in Housing (PAIH), an independent, anti-racist homelessness and human rights charity which provides free shelter to those at risk of destitution through Room for Refugees. It is calling on housing associations and landlords to take measures to prevent Serco from changing the locks.

Speaking about the court’s decision, PAIH’s Director Robina Qureshi said: “We are disappointed. We hoped the Court of Session would put a stop to summary evictions of vulnerable people without court orders.

“Lock change evictions without court orders look to be the norm in Glasgow for the next ten years, which of course is in keeping with the UK government’s Hostile Environment policy. A humanitarian crisis in the city looks set to follow and we will see hundreds more people being left destitute in Glasgow each year of the next ten year contract.

“We are still looking at what non-legal measures are needed to prevent lock changes and evictions going ahead. Given that the court order route is now off limits, we therefore urge every single private landlord and housing association in Glasgow that is leasing their properties to Serco to take a firm stance to protect the human rights of vulnerable asylum seekers and refugees in Glasgow. Housing after all is a basic human right.

Explainer: Why are asylum seekers in Glasgow facing mass eviction and a ‘humanitarian crisis’?

Actions they have called for include putting into place clauses to prevent the altering of fixtures and fittings (i.e. locks) and insisting on a humane standard protocol that “is written and publicly available, for how asylum seekers are to be put out from their properties, in the absence of a legal route”.

Following news of the threatened evictions by Serco last year of 300 asylum seekers, a series of protests and solidarity actions was organised in the city, with Living Rent, Scotland’s tenants’ union, being one of the co-ordinators of the resistance to lock changes.

After the Court of Session verdict was announced, Living Rent said they “stand prepared to resist all evictions by any and all means necessary, regardless of any attempts to render them legal or otherwise”. They also called on landlords and housing associations “not to accommodate Serco’s mass eviction policy in any way”.

VIDEO: What does a tenants union do?

In response to a request from CommonSpace as to whether they will be implementing any of PAIH’s suggestions, Zhan McIntyre, Policy Lead, at the Scottish Federation of Housing Associations, said:“When the threat of wide-spread lock-change evictions was raised last year, SFHA members were quick to act, responding with integrity, compass and common sense. At that time, SFHA called for a ‘pathway approach’ to be adopted, so that every person in the asylum system has a clearly defined process and support in place allowing next steps to be planned well in advance of any Home Office decision, and we repeat this call once again.

“The Court of Session decision has been disappointing for asylum seekers across Glasgow who have been threatened with lock-change evictions. However, I am confident that housing associations will once again act with integrity and compassion to do what they can to protect the rights of vulnerable asylum seekers and refugees in Glasgow.”

John Blackwood, Chief Executive of the Scottish Association of Landlords (SAL), responded to PAIH’s call by stating: “SAL will continue to support its members in providing high-quality, flexible accommodation across Scotland and promotes the private rented sector working within the law and to the highest professional standards.  We have worked and will continue to work with a range of partners such as the Scottish Refugee Council to support a multiagency approach to help support those seeking asylum.”

Serco is contracted by the Home Office to house asylum seekers, including in Glasgow. The unprecedented move in July last year was prompted by a decision of the Home Office not to reimburse Serco for the direct cost of housing asylum seekers who have not been given leave to remain, even though they may be at various stages of appeal.

Cross-party resistance and hunger strikes in response to the lock-out prompted a temporary retreat by Serco. In January this year, it was announced that from this September, Serco will no longer be contracted to provide housing accommodation for asylum seekers.

Commenting on the decision by the Court of Session in Glasgow, Julia Rogers, Managing Director of Serco’s Immigration business, said: “Serco notes today’s decision by the Court of Session confirming our right to repossess property occupied by people whose claim for asylum has been determined by the UK Government, but who nevertheless refuse to move on when asked to do so.  In August 2018 we said that we unreservedly welcomed the legal challenge as it would enable all parties to clarify what was at that point an untested area of Scottish law.  Today we have that clarity, and we are pleased that the Court of Session has confirmed our views on the legal position.

“Serco will not be taking any immediate action as a consequence of this decision, but will now discuss with the Home Office, Glasgow City Council and our other partners how best to proceed, given that there continues to be a very significant number of people in Glasgow whose claim for asylum has been refused by the UK Government and who are continuing to receive the benefit of free accommodation, paid for by Serco, some for months, even years.”

Speaking to CommonSpace at a recent demonstration calling on Glasgow City Council to provide emergency accommodation to asylum seekers, refugee rights campaigner Pinar Aksu said: “There is a loop in the asylum system whereby if a person’s case is finished, they can become destitute at any moment. For Serco to threaten people and say that locks are going be changed so people become destitute is dehumanising in the first place. It takes long years for people to recover fom this. You have to think about the mental health of whose who are affected – people commit suicide because of this. As organisations and activists, we have to unite and ask for simple procedure to prevent people from becoming destitute.”