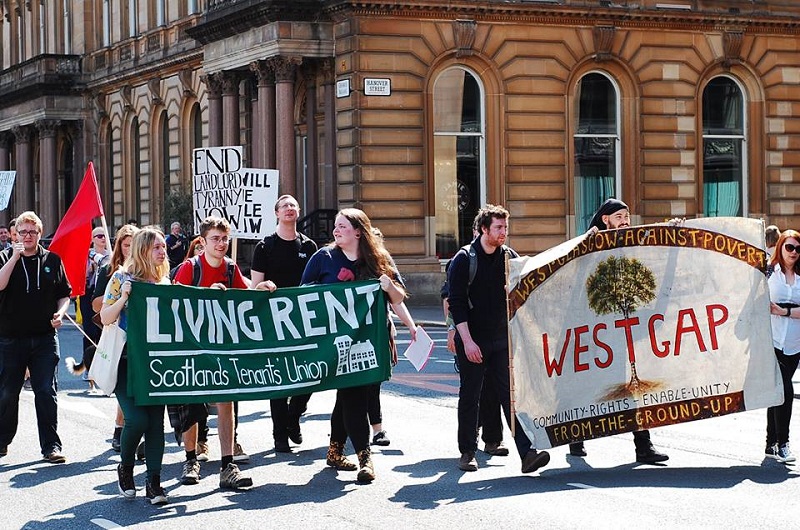 RENTERS under threat of eviction due to rent arrears could be helped by tougher rent controls, according to tenants’ union Living Rent, after a new report showed the negative impact of the universal credit roll out on housing affordability.

A Scottish Government-commissioned report published last week into the effects of the UK Government’s flagship welfare reforms showed that households renting in the private and social sector have been severely affected by UK Government welfare policies.

The report found a sharp increase in the number of households falling into rent arrears in areas where the new benefits regime has been introduced. In East Lothian, 72 per cent of social housing tenants claiming universal credit were in arrears, compared to 30 per cent of all tenants.

Introduced in the UK by the Conservative and Lib Dem coalition in 2013, the new system combines multiple payments, including housing benefit, into one payment. Unlike previous systems, claimants are unable to have the housing element of their benefit paid directly to their landlord.

The freeze on local housing allowance rates, a benefit paid to help people who rent in the private sector, was also found to have had an impact on people’s ability to afford to rent.

READ MORE: Jeremy Corbyn calls for rent controls as part of a radical programme on housing

Reacting to the report, Craig Paterson, spokesperson for tenants’ union Living Rent, spoke to CommonSpace about the solutions Scotland could implement: “The impact of universal credit benefit changes have had a detrimental effect on people who rent their homes.

“Ever increasing rents coupled with a social security net that is shrinking and a draconian sanctions regime means more and more people falling behind with their rent or are finding renting unaffordable entirely. We are desperately in need of a rent freeze, without it we will find more and more people evicted due to rent arrears or priced out of the market completely.”

Scottish Government housing minister Kevin Stewart was critical of the impact of the UK Government’s reforms: “Almost half a million Scottish households receive some form of financial support for their housing. It is clear that UK Government welfare cuts are having a devastating impact, with money taken from the pockets of people across the country, pushing them into crisis and debt.

“We are doing all we can, with the powers we have to protect those on low incomes from these devastating UK Government cuts – spending more than £125 million this year alone to do so. This includes £62 million to fully mitigate the ‘bedroom tax’, help for those impacted by the freeze in local housing allowance, as well as providing support for low-income households.

“This report builds on previously published evidence of the undue pressure on people that UK government changes to our welfare system are causing, including housing. We want to ensure everyone has access to a safe, warm place to call home – as part of that, the UK Government must urgently change course.”

The Scottish Government recently created new powers for local authorities to create “rent pressure zones” which would allow for a cap to be placed on the cost of rent in certain areas, but campaigners like Living Rent have previously argued for a nationwide system tied to things like quality.

Scottish Labour leader Richard Leonard said in January 2018 that the party would bring new legislation to Holyrood for a “Mary Barbour law” which would seek to introduce Scotland-wide rent controls tied to average wages.

The party’s housing spokesperson, Pauline McNeill, said their plans would help struggling renters: “The rollout of Universal Credit has been a shambles, the Tory government has to pause and fix it.

“Scotland’s housing crisis is down to an under-regulated private market and chronic lack of affordable and social housing.

“This housing crisis has seen private sector rents rising faster than wages – and it is young people who have been hit the hardest.

“Labour’s plan for a ‘Mary Barbour law’ would reform the private rented sector, by limiting rent rises with a link to wages to ensure they are affordable.”