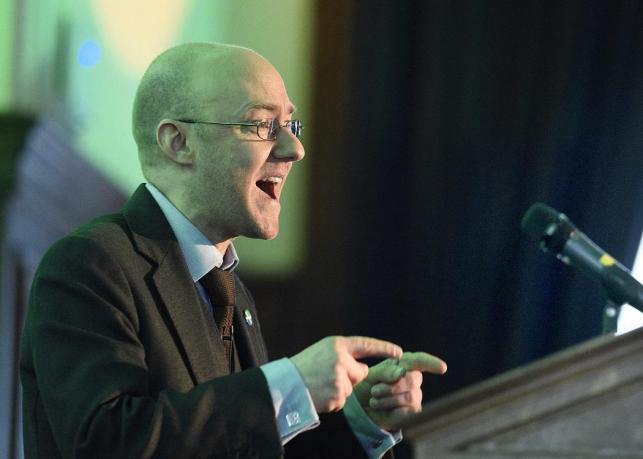 Patrick Harvie will speak at basic income event this afternoon

A SOLD out event considering a universal basic income for Scotland is being held in Glasgow today (29 Aug), with speakers including Patrick Harvie MSP and Labour Councillor Matt Kerr.

The event is being hosted by Glasgow Council for the Voluntary Sector and RSA  (Royal Society for the encouragement of Arts, Manufactures and Commerce) Scotland at the Albany Learning and Conference Centre in Glasgow.

Universal basic income is a tax-exempt, unconditional income provided by the government to every citizen, as a form of social security. Trials of a Universal Basic Income are underway in Finland, the Netherlands and Canada.

The event will consider whether Scotland is ready for such a radical policy shift, how it might benefit families and communities currently supported by the third sector, and how a number of areas in Scotland are progressing with setting up pilot schemes of the policy.

Patrick Harvie MSP, co-convener of the Scottish Greens, will tell attendees that now is the time for the idea of a universal basic income, which the Greens have long supported, to become a reality.

Patrick Harvie has said ahead of the event: “A citizen’s or basic income has long been Scottish Green Party policy and it is encouraging to see representatives from other parties now considering it.

“Interest is growing, with a Citizen’s Basic Income Network in Scotland and pilot projects proposed in Glasgow, Fife and – thanks to Green councillors just last week – in Edinburgh.

“The need for such bold policies is urgent. What was called social security has been twisted over the years by successive UK Governments into a system that bullies people and traps them in poverty, even when they are working. A basic income would give people stability to look for work and balance that with any caring responsibilities.”

Other speakers at today’s event include Chief Executive of the Life Changes Trust, Maddy Halliday, Councillor Matt Kerr from Glasgow City Council, and Annie Miller from the Citizens Basic Income Network in Scotland, who will launch her book, “A Basic Income Handbook”, at this event.

Counciller Matt Kerr of the Labour Party has been an advocate of a basic income for some time and has sought cross party support for pilot schemes in Glasgow and Fife. Kerr has said of the policy: “The universal basic income is about the relationship between state and individual.

“I’ve always believed that socialism is about giving people freedom from fear, but the right have distorted the word to suit their agenda.

“If you’re free from worrying about having a roof over your head and feeding your children, you can be free to take some risks and manage your own life. You can have the ability to take part in your community and volunteer without the risk of sanctions.

“At its core is a message from the state to the individual, saying ‘we actually give a damn about you and we’ll treat you with respect.”

The Scottish Greens have said they would combine a universal basic income with progressive taxation, in order to reduce poverty and support people who have caring responsibilities or who are in part-time work. Allan Young, Green councillor for Govan, has voiced his support for the policy in advance of Patrick Harvie’s speech today:

“With high levels of poverty and inequality, it’s clear that current economic policies are failing many in Glasgow. We need fresh thinking, and ideas which put power into people’s hands. Ideas such as a Universal Basic Income, which we have long called for.

“A Universal Basic Income could provide Glaswegians with the stability to pursue further education, care for loved ones and say to no to exploitative zero hour contracts. We are calling for Glasgow City Council, possibly in partnership with other councils, to establish a cross-party working group on UBI and trial a pilot scheme for the city.”