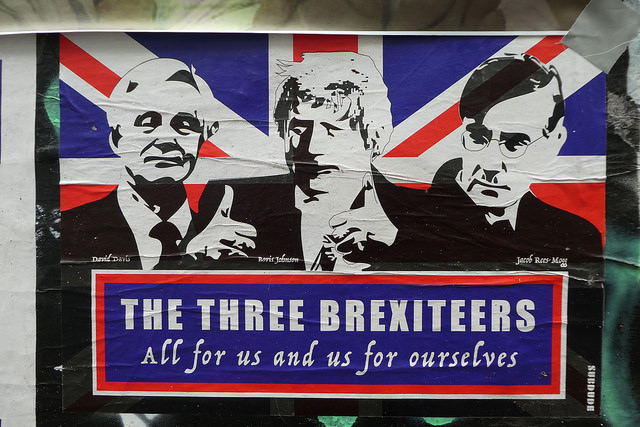 Calum Martin (@calummartin1), national co-chair of the Scottish Socialist Party, says we shouldn’t let the punch and judy show over the Brexit negotiations distract us from the real problem – the political elite working solely in in the interests of corporate power

It was a moment as Earth-shattering as dropping a sandwich, and I’m sure for someone, somewhere, almost half as heart-breaking.

With Boris out too, the press have sold plenty of papers trying to out-do one another with speculation about just how difficult a situation Theresa May is in, now that her main internal rivals are all out of the Cabinet and that she’s got a sort of soft-ish Brexit plan designed to appeal to a majority of both Tory and Labour MPs.

Yet behind all the bluster and maneuvering, there remains one true constant that we can know about the whole negotiation process. Whatever happens, the arrangements will be designed and delivered to meet the interests of the super-rich and the corporate lobby.

Both sets of negotiators are under pressure to deliver the best deal for the same sets of corporations. In so far as there is much of a meaningful distinction between the bigger “British” and “EU” corporations anymore there’s certainly much overlap in their interests. Those predominantly based in the EU don’t want obstacles to profits from the UK market, and those predominantly based in the UK don’t want obstacles to profits from the EU markets. None of them want the expense or hassle of having to move any offices or sites and all of them would be quite happy to see a race between the UK and the EU to undercut one another on corporation taxes and wage protections.

I’m not saying we should ignore the Punch-and-Judy display bouncing about Westminster right now. I’m saying let’s be wise to what lies behind all the puppets there. Let’s remember too that all the real problems we face here today are not unique to Westminster.

EXPLAINER: How could Theresa May be evicted from No 10?

Low pay. Over-concentration of wealth. Increasing profiteering around the necessities of life. Transparent disregard for the common good by big business. These are universal problems we share with billions worldwide, both within and outwith the EU.

The root of all these problems is a political elite, in the pocket of a corporate lobby, who between them ensure that whims of those wealthy vested interests always trump the interests and needs of the people.

In or out of the EU, in a sense we absolutely do need to “take back control”. Not in the sense of shuffling a few administrative jurisdictions back and forth between Brussels and Westminster, but in fundamentally shifting the decision making power in this country out from the glittering boardrooms and the stockmarket casinos, and back into the hands of us, working people.

That means a real Living wage for all – why should we tolerate politicians who suggest that a full time job should not be enough to live on?

That means restoring key utilities to the public ownership from which Thatcher took them – why should we pander to billionaire executives who grow ever richer and richer from the fuel poverty and hardship their profiteering creates?

These are sensible measures which would not only lift millions out of poverty, but also make life much better for millions more. Even beyond that, by increasing our spending power as consumers, through these measures we would improve and strengthen our domestic market as a whole. These are long overdue, common sense changes that are good for all of us – we only don’t have them yet because they are a direct challenge to the profiteering through which the tycoons suck wealth away from us all.

With or without David Davis and Boris Johnson, in or out of the EU – Westminster is still in the pocket of the most self-serving vested interests out there. The real challenge is for us to ensure our new Scotland is run not by that same lobby, but rather for the people and by the people.

Forget Dave and Boris’s Westminster. It is Independence founded on common sense Democratic Socialism that is our answer.