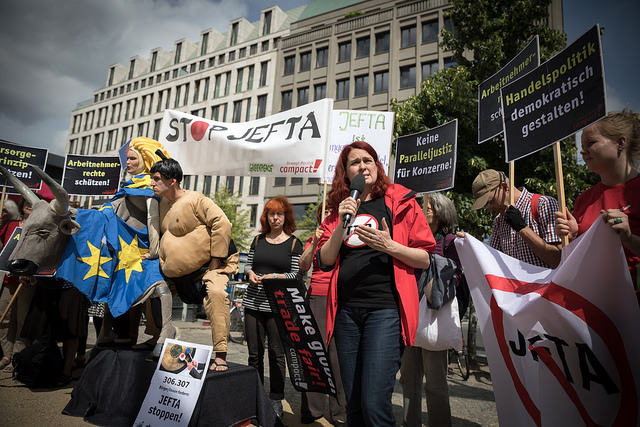 Calum Martin, national co-chair of the Scottish Socialist Party, highlights a new trade deal between Japan and the EU which will increase the power of corporations over our lives, and says it’s wrong to think of ‘free trade’ as anti-Trump, as the US President’s plan is simply seeking to bully countries into acquiescing to US corporate power

WHEN the Transatlantic Trade and Investment Partnership (TTIP) was beaten, many people rightfully breathed a sigh of relief.  TTIP was the Trade Deal of nightmares.  Despite the extreme lengths that were taken to obscure the contents until it could become a fait accompli, the key goals the deal would have won for its corporate sponsors soon became extremely public.

Most infamous was the ‘Investor State Dispute Settlement’ mechanism (ISDS). In essence, a corporate Kangaroo court. It would have locked most of the Western world into an agreement giving corporations binding power to sue countries whose legislation or regulation they felt would impede profits.  Not any old domestic court mind.  This would be a corporate court won and run by the corporate lobby.  Its implementation would have marked the single greatest surrender of national popular sovereignty of the century.  The clause was only dumped from the treaty talks after intense protests across the EU.  There were even efforts to have it declared incompatible with the legal systems of several European states.  Amongst the associated travesties was the sight of “patriotic” UK politicians lining up to praise the opportunity to hand over our sovereignty to international big business.

Ultimately, amid growing protest, the whole treaty fell through, defeated.  An acrimonious setback to an audacious power grab from the corporate lobby.  Setback, really is the key term.  Whilst TTIP was beaten, it’s defeat inflicted no real damage on the power of the corporate lobby.

The proof of that was signed this month.  In a new age where ‘the Trump Show’ draws the daily attention of the world, the big corporate lobby is proactively seizing on the opportunities the distraction creates.  The new JEFTA trade agreement between the EU and Japan picks up pretty much exactly where TTIP left off, albeit with Japan instead of the USA.  As a starting point, the treaty aims to eliminate 99 per cent of tariffs between them by 2020.  ‘Isn’t it great,’ it’s big business proponents bleat, ‘just think – cheaper prices for you and bigger profits for us – everyone’s a winner!’

Except that’s only half the story. Bigger corporate profits – that half certainly is true.  It’s the whole point of the treaty.  As for the rest?  Be wary. This is part of an ongoing process of deregulation by the back door. Every time such a  free trade deal is struck we sink to the lowest regulatory denominator on every front.  The big corporations use that to keep driving the ‘race to the bottom’, higher profits for them, but for us?  Wages undermined.  Working conditions undermined. Job security undermined.  Small business undermined.  Regulations undermined.  National popular sovereignty undermined.  Even prohibited goods now need only be slightly too lightly policed in but one location for them to flood into the whole zone.

‘But wait,’ the corporate lobby squeals, ‘There’s more. Trump is criticising Free trade deals. You don’t like Trump, therefore you should like Free Trade.’

Well that sounds… does that sound logical? The answer is that in practice they’re again making a totally false argument on their part.  This idea of Trump as a protectionist voice against the corporate establishment is a dangerous myth that needs busted.  President Trump is as much on the side of the corporate lobby as any of the rest of his ilk.  Moreover, Trump is not really a protectionist.

Take a close look.  Trump is starting trade wars against countries that place significant tariffs on US exports.  When they back down, he’ll cut a deal which reduces the tariffs on both sides.  It’s straight out of Trump’s own business playbook, and more often than not it tends to work.  For Trump, these trade wars are about using American economic clout to break down the tariff barriers opposing America’s entry into an even less regulated global free trade arena. When we beat TTIP, we kept certain tariffs in place at the gates – now Trump is trying to batter the gates down altogether.

Trump’s protectionism is not a visionary choice for the future, it’s a short term battering ram for free trade. For Trump and his corporate buddies, it is increased American free trade access to global markets that is the real goal.

“But Calum”, I hear you wonder, “aren’t we leaving the EU? How is JEFTA relevant to us anyway?” Well spotted. Let me assure you (or perhaps alarm you) – these deals are of direct relevance to us, both politically and economically.

Imagine a globe being slowly covered in gaffer tape.  No single piece covers the whole thing.  At first it just looks patchy.  As the process goes on though, the bars of tape, each covering different parts of the globe will soon start to overlap.  JEFTA overlaps with CETA.  CETA overlaps with NAFTA.  NAFTA overlaps with PAFTA.  Etc.  Before we know it, all those small insidious segments have all overlapped and smothered the whole globe.  A post-Brexit UK need only strike one deal that overlaps any of these others and the race to the bottom is given fresh momentum both here and abroad. In that environment once one or two of these treaties start to include measure like ISDS, the pressure to align regulations and include them in the other treaties increases tenfold.

These economic trends are the results of political choices.  Given the sorts of viciously elitist trade-deals that so many Westminster politicians are calling for post Brexit, and given the work of EU chiefs in designing policies like TTIP and JEFTA, we need to face the fact that neither the EU nor Westminster politicians, both deep in the pocket of the corporate lobby, offer any inherent way to challenge this process.

The only real guarantee is to stand up for ourselves both at home, and alongside those doing likewise abroad.  We need to build a society which puts the needs and interests of us, working people, ahead of the greed and whims of the big corporations.  Billions globally would benefit from trade deals which enshrine wages and working conditions.  Trade deals which improve regulatory efficiency worldwide.  Trade deals which start to close off the tax loopholes exploited by the super rich. I’m not saying we should be inherently “protectionist” in the classical sense, but rather we should be looking at trade deals as something which can protect rather than erode the needs and interests of the people.

ANALYSIS: Scotland’s 11 billionaires – did they really get rich ‘through their vision and tireless endeavours’?

So how do we actually get there?  Many of the campaigns we need have already begun.  Close scrutiny of trade bills coming out from Westminster is an essential point too.  Many of them may look like they encapsulate continuity, but as they say, ‘the Devil is in the details’. Clauses and details which erode progress we’ve won in the past need to be spotted and addressed.  In the longer term being able to formulate and promote clearly better alternative forms of trade is another positive measure. Given the nature of international trade, we aren’t along in looking at this, and be it through passive observation or direct communication, all our efforts and those of our equivalents abroad can learn from one another.

There are other additional measures which can help take us there though.  An Independent Scotland delivered on a people’s programme could represent a transformative shift in the balance of power back in our favour.  A shift on those terms would help us deliver the gains we’re already campaigning for – a real living wage, better working rights, and a return to public hands of essential utilities.  These are the sorts of transformative change independence can mean at home – changes from which the real winners are working people, small businesses, small farmers. All of us but the tycoons.

Even beyond that however, it would also give us the opportunity to start to work for new, better trade deals far more easily.  As an independent Scotland founded on these principles we could stand up for ourselves on the world stage far better than Westminster politicians have ever done on ‘our behalf’. We can do so much better than Thatcher, Blair or Boris.

As for JEFTA?  For now, JEFTA still needs the rubber stamp from the European Parliament.  Odds are, it’s almost certain to get it.  The big business lobby has enough MEPs and parties bought over to make sure of that.  When it does it will create the single largest free-trade bloc in the world, holding over 600 million inhabitants and over 30 per cent of global economic output.

With Brexit on the horizon, there’s not an immense deal we can do. If you’ll have an MEP in there when it goes to the vote, asking them to vote against it, and keeping an eye on how they vote would do no harm.  Either way, our big task remains much the same, building the campaigns, movements and parties  for real change in our own respective countries, and keeping a weather-eye for future trade deals that require scrutiny.

These treaties are of increasing global scale, and of increasing collective significance for all of us.  If the corporate lobbies and the politicians who serve them want to keep trade dealings all sealed off in the dark behind closed doors, then it’s up to all of us to bring those deals out into the light and build a real, better alternative. 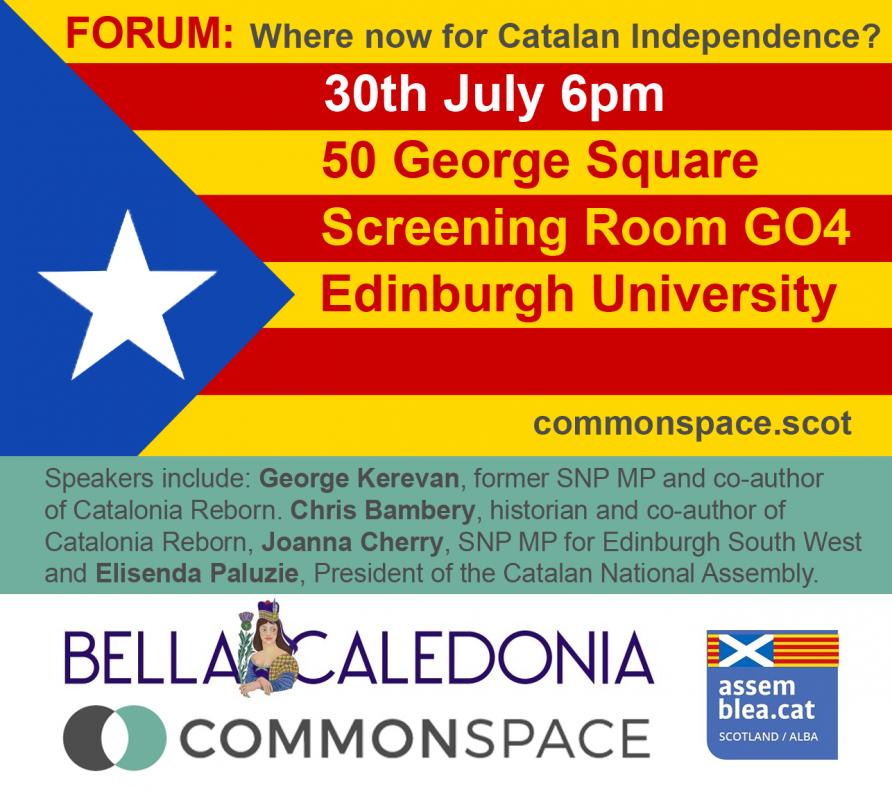