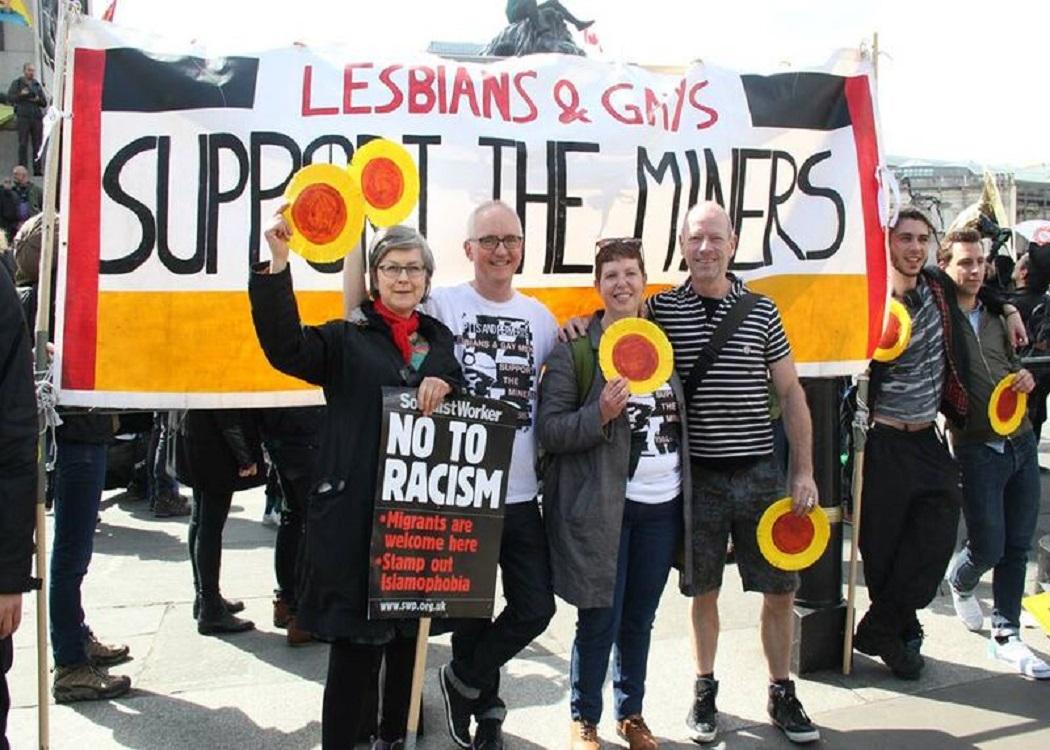 THE TIE campaign for LGBTI+ education in the Scots schooling system has gained the backing of the legendary Lesbian and Gays Support the Miners (LGSM) group – the inspiration behind the film ‘Pride’.

The LGSM group brought about the unlikely partnership of its time between LGBT and mining communities during the miners’ strike, and the bond paved the way for LGBTI representation and campaigning in the Labour party.

The LGSM campaign is the inspiration behind the 2014 film ‘Pride’, which won the Queer Palm award and the Cannes Film Festival and was nominated for two Baftas and a Golden Globe.

During a recent trip to London to garner support, the newly-launched TIE campaign , which aims to get LGBTI+ education in Scots schools on the agenda, TIE secured the support of the group.

“TIE is working in an inspirational way to ensure that all school students today have a chance to learn and develop in an environment free of prejudice, misunderstanding and blame.” Nicola Field, LGSM

Nicola Field (far left in main image), one of the original members of LGSM, said: “The experience of LGSM in the 1980s showed clearly how divisions and prejudice between ordinary people are sown and fostered by bosses, politicians and the right-wing media, to make us blame one another for the difficulties we experience.

“Although we are now told we have equal rights, LGBT-phobia is still a danger, as is shown in the shocking statistics about depression rates and suicidal thoughts amongst young LGBT people.

“TIE is working in an inspirational way to ensure that all school students today have a chance to learn and develop in an environment free of prejudice, misunderstanding and blame. As a member of the original LGSM group, I encourage everyone to support their work and hope all of us do what we can to make sure that their message reaches far and wide across all sections of society.”

TIE co-founder Liam Stevenson told CommonSpace: “We took the campaign to London to raise the profile of what we’re doing and hopefully build support. We made good ties with trade union people, but getting the support of LGSM was one of our primary ambitions, we’re really delighted.”

TIE was set up by Stevenson and Jordan Daly , who met while campaigning during the Scottish independence referendum campaign. Stevenson had never been involved in political activism before, and, as a straight man, had never championed rights for the LGBTI community.

However, after the pair met and struck up a friendship, Daly’s experiences of growing up and going through the education system as a young gay person prompted the pair to set up TIE.

According to Daly, their unexpected friendship and subsequent activism echoes that of the LGSM campaign.

“The LGSM community came out in support of the miners at a time when most communities didn’t want anything to do with the LGBTI community,” he said.

“But they quickly realised that both communities were fighting similar fights. While LGSM raised funds to support the mining community in Wales, the miners got on board with the LGBT cause.

“Getting the support of LGSM was one of our primary ambitions, we’re really delighted.” Liam Stevenson, TIE

“Eventually, what got LGBT issues on the map in Britain was when the National Union of Mineworkers putting in a block motion to the Labour party urging them to fight for these rights.

“It’s similar to Liam and I – people from two different communities become friends, and both fight for each others’ injustices.”

Stevenson added: “It never dawned on me until we were in London how much our story echoed that.”

The TIE campaign kicked off last month with the launch of a petition calling for statutory teaching of LGBTI+ issues in all schools in Scotland. It has obtained nearly 1,000 signatures, and the campaign has secured the backing of Scottish Greens co-convener Patrick Harvie, the Common Weal think-tank, Scottish Left Project activists Cat Boyd and Jonathan Shafi, and Solidarity Holyrood candidate Tommy Sheridan.

Watch the video below to find out more about the LGSM campaign.