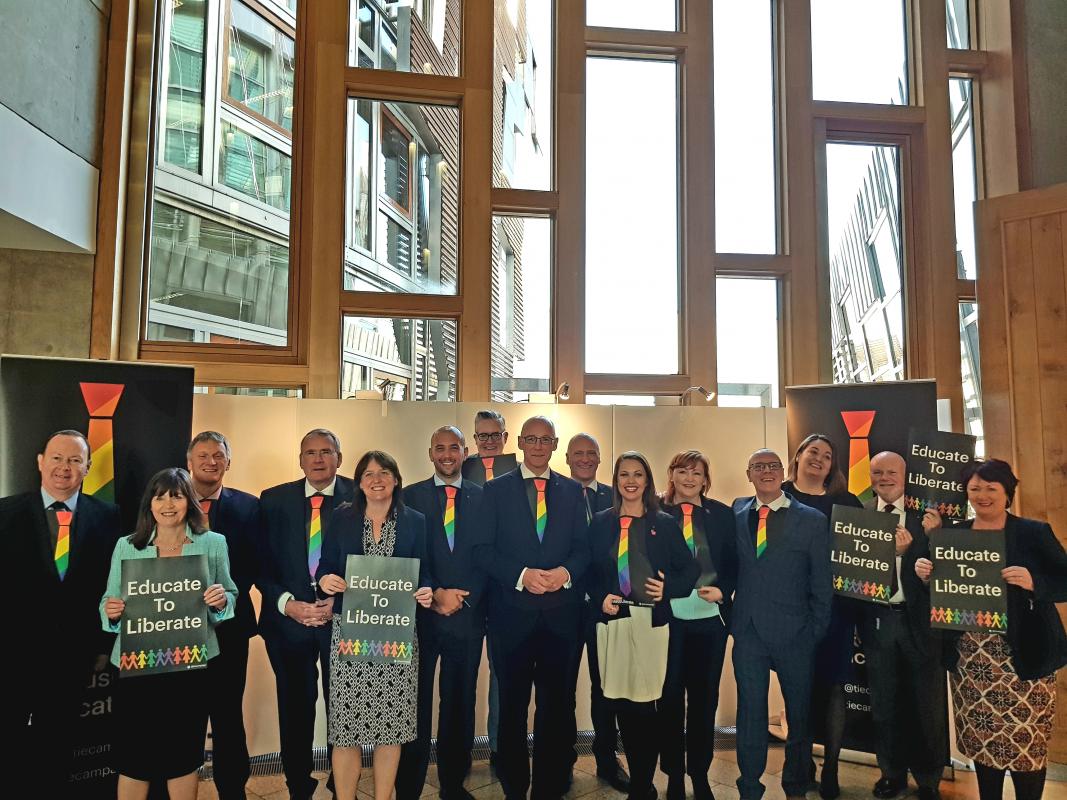 THE TIME FOR INCLUSIVE  EDUCATION (Tie) campaign held a stall at the Scottish Parliament on Tuesday (19 September), where it welcomed cross party support from MSPs and Scottish Government ministers, including Cabinet Secretary for Education and Skills, John Swinney.

The campaign, which aims to combat homophobia, biphobia and transphobia with inclusive education, was sponsored to appear in parliament by Scottish Labour MSP Monica Lennon, and will be in parliament again on Thursday to coincide with First Minister’s Questions.

Tie is asking MSPs to sign up to its five point pledge to address the issue, which includes the introduction of legislation to which would place a duty on all schools to be proactive in tackling homophobia, biphobia and transphobia through an inclusive educational approach.

“That the Cabinet Secretary for Education and Skills and many other Cabinet Ministers joined us to publicly express their support indicates that progress is being made.” Tie campaign

Speaking of the support which the campaign received in parliament this week, a Tie spokesperson said: “We are encouraged by the amount of cross party MSPs who visited us in The Scottish Parliament yesterday to reaffirm their support for our calls for LGBTI-inclusive education.

“We extend our thanks and appreciation to Monica Lennon for hosting us, and for her continued commitment to advancing our campaign. A strong message was sent from the Parliament to LGBTI youth across Scotland yesterday; that LGBTI inclusive education has support and will become a reality.

“In particular, that the Cabinet Secretary for Education and Skills – John Swinney – and many other Cabinet Ministers joined us to publicly express their support indicates that progress is being made, and that eradicating homophobia, biphobia and transphobia in our schools with an educational approach is firmly on the political agenda.

“We will continue to work productively on the Scottish Government’s joint Working Group for LGBTI Inclusive Education and we are confident that a strong set of proposals will be forthcoming.”

During Tie’s visit to the parliament on Tuesday, numerous MSPs came to be photographed alongside the stall in a display of support, including John Swinney, Minister for Parliamentary Business Joe Fitzpatrick, Cabinet Secretary for Health and Sport Shona Robison and Minister for Local Government & Housing Kevin Stewart.

“Whilst a majority of MSPs already agree with the aims of TIE, there’s still a sizeable number who haven’t made that commitment.” Monica Lennon MSP 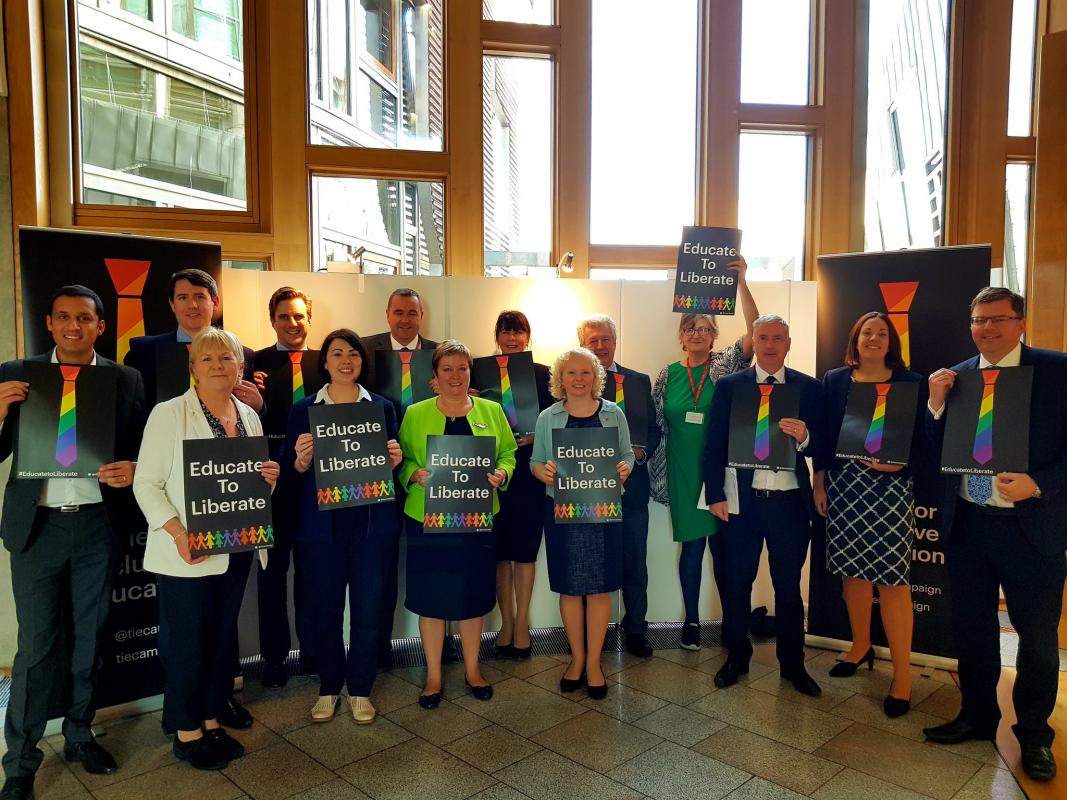 Monica Lennon MSP said: “I’m a big fan of the TIE campaign, so I’m really glad I was able to sponsor their exhibition stall in Parliament this week.

“Jordan and Liam are remarkable campaigners who have done amazing work over the past couple of years to move inclusive education higher up the political agenda.

“I’m glad that by being visible in parliament this week, the campaign has persuaded more MSPs to commit to its 5 pledges on inclusive education.

“Whilst a majority of MSPs already agree with the aims of TIE, there’s still a sizeable number who haven’t made that commitment, so there’s lots more work to do and I’m pleased to be playing my part.”

Earlier this year, the Scottish Government fulfilled one of Tie’s recommendations by setting up a cross-party working group on LGBTI education.

Following Tie’s parliamentary visit this week, a Scottish Government spokesperson said: “We have a firm commitment to take forward the issues that Tie has raised and we will do that in consultation with them and other LGBTI organisations, through the work of the LGBTI Inclusive Education Working Group.

“We are listening carefully to concerns about the difficulties being faced by some young people in schools.” Scottish Government

“It is vital our education system supports all Scotland’s young people to reach their full potential and we are listening carefully to concerns about the difficulties being faced by some young people in schools.

“While local authorities and schools are best-placed to decide how to deliver the curriculum based on local needs and circumstances, there may be more that can be done to improve the education experience for LGBTI young people.

“That is why we formed a working group to examine how the education experience for LGBTI young people in Scotland can be improved and we look forward to receiving its recommendations in due course.”

Over half of MSPs are already signed up to the pledge, including MSPs from all parties. Tuesday saw several MSPs newly sign up, including SNP’s Sandra White and Colin Beattie.

The Scottish Green Party’s six MSPs are signed up, making them the first party to have all of its MSPs commit to the pledge.