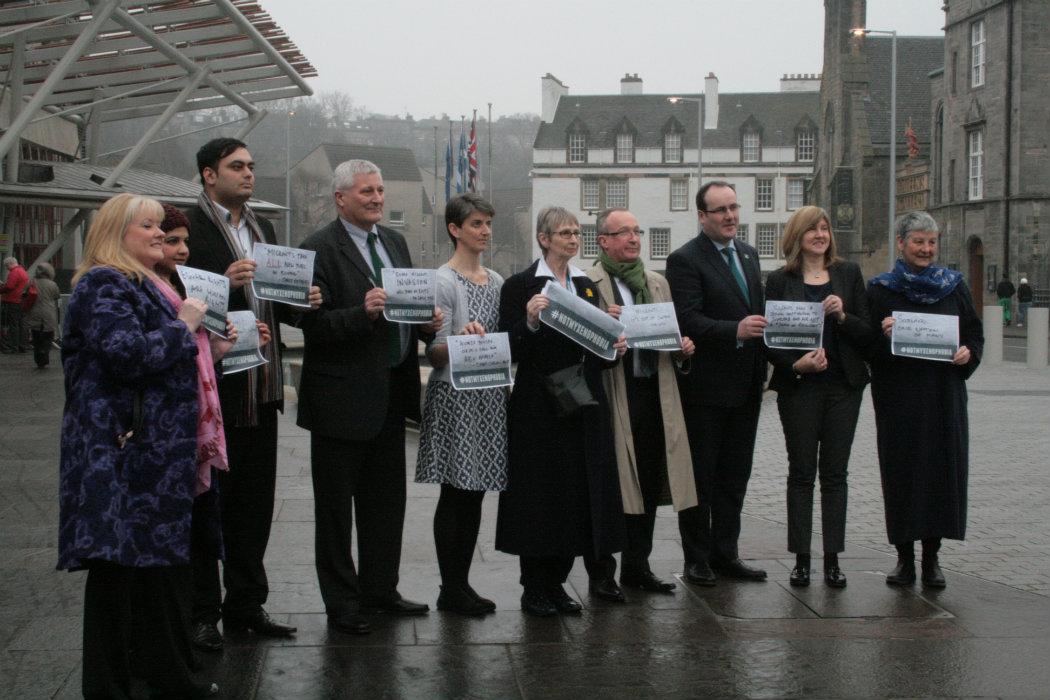 CITIZENS must challenge outdated and bigoted views of different nationalities and races, according to a new campaign group launched in Edinburgh.

‘Not My Xenophobia’, formed by independent MSP Jean Urquhart and a host of campaigners, aims to empower those who want to challenge xenophobia in politics and the media.

Inspired by the success of the #everydaysexism campaign, Not My Xenophobia will invite social media users to name-and-shame examples of xenophobia language, stereotypes and attitudes they see being used in Scotland.

The launch of the project follows criticism of Ukip MEP David Coburn, who compared Scots-Asian government minister Humza Yousaf to a terrorist convict.

Last week a poll by the BBC identified negative attitudes towards immigration in Scotland. Currently 64 per cent of Scots wanted immigration reduced or stopped completely, while only 31 per cent of respondents wanted numbers to remain stable or increase. (Click here to read more).

Last month, a report from the British/Irish Parliamentary Assembly highlighted concerns about attitudes towards Irish people in Scotland the UK (click here to read more).

The 2010 Scottish Social Attitudes Survey found that 66 per cent of Scots supported ending all forms of discrimination and prejudice. 28 per cent believed prejudice was sometimes justifiable. (Click here to read more).

Ahead of the campaign launch at the Scottish Parliament, Urquhart explained the need for a campaign: “From exploitative programmes like Immigration Street to the Ukip MEP David Coburn’s disgusting, racist comments about Europe Minister Humza Yousaf, we are surrounded with xenophobic messages in politics and the media.

“But speak to ordinary Scots and you will find a very different attitude. Most of us value our friends, neighbours and colleagues from all over the world. The xenophobia we are being bombarded with isn’t ours – it’s being imposed on us by people in positions of power and influence who want to set us against one another.

“This influence is especially pernicious in the run-up to the General Election, as the big parties compete over who can be tougher on immigrants, never mind that immigrants are and always have been an essential part of the country those parties want to run.

“I’ve started the Not My Xenophobia campaign to give a voice to the majority of Scots who reject these hateful attitudes, and to name and shame the media organisations and politicians who promote them for their own gain.”

Urquhart will also lead a debate on celebrating community diversity in the Scottish Parliament on Wednesday.

Not My Xenophobia has the support of Edinburgh Councillor Maggie Chapman, who moved to Scotland from Zimbabwe; Roza Salih who set up the Glasgow Girls campaign in Drumchapel against Home Office dawn raids; and Tony Khan, a Pakistani asylum seeker and activist who fled the Taliban three years ago.

The campaign will stand up for the social and economic benefits of migration to Scotland.

“I’ve worked closely with the Polish community in the Highlands, and seen first-hand the real pain that is caused by xenophobic language, stereotypes and attitudes.

“The Polish contribution to Scotland has been huge, from the Polish soldiers who defended our east coast in World War II, to the nurses who support our NHS today. Newspaper headlines that scream about the ‘problem’ of immigration insult that contribution and promote discrimination and even violence,” explained Urquhart.

“The Scottish identity is defined by migration. Our own nation is a rich mix of peoples and cultures from all over the world, and Scots have settled all over the world in return. We are an exceptionally international country, and are better off for that.

“I hope very many Scots, old and new, will join in the Not My Xenophobia campaign to challenge xenophobic attitudes head on, and to show that our diverse and beautiful nation will not be divided.”