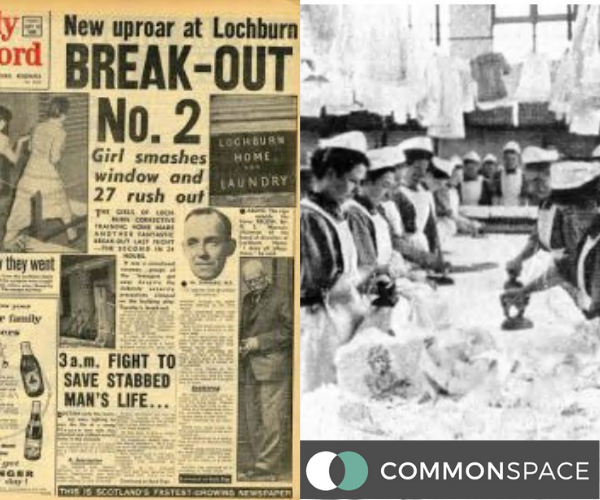 The Glasgow Magdalene Institute was home to thousands of women and girls, held there between 1812 and 1958, forced to work in the laundry as penance for their sexuality. Now a campaign by the Women’s Support Project is calling for a memorial to Glasgow’s ‘forgotten women’.

Locally it was just known as ‘The Laundry’. Before washing machines became commonplace in homes, clothes were sent there to be cleaned, but no one spoke of the women that worked there, locked up behind the buildings forbidding walls.

The silence was broken in 1958, when those women decided they’d had enough of the abuse and incarceration. Described at the time as a ‘riot’, The Daily Record reported that ‘Girl smashes window and 27 rush out.’

These women were in fact all aged between 15 and 19, and despite the fact that none had been convicted of a criminal offence, the police hunted them down, rounded them up and brought them back. The public were even warned to look out for their distinctive uniforms.They escaped again down a fire escape and held a rooftop protest in which they threw notes down to the reporters on the street below.

The third day of their protests coincided with a visit from the Home Office (known then as the Home Department). It led to an inquiry into the allegations made by the inmates of verbal, physical and emotional abuse.

The institute was shut down that year. No one was ever held to account.

Contrary to common perception, not all Magdalene asylums (once found in all parts of the UK) were run by the Catholic Church. The Glasgow Magdalene Institution (officially known as Glasgow’s Magdalene Institution for the Repression of Vice and Rehabilitation of Penitent Female) was run the local authority, funded by voluntary contributions and the income generated by the laundry.

…they were essentially incarcerated for their sexuality, but they were also made to work. Professor Linda Mahoud

Professor Linda Mahoud, historian and author of The Magdalenes: Prostitution in the Nineteenth Century, told CommonSpace: “These institutes weren’t designed to help women on their own terms but were designed to punish them for behaviours that had been done to them – they were essentially incarcerated for their sexuality, but they were also made to work.

“They were expected to work in the institution without pay for long periods of time in order to get what was considered to be a moral rehabilitation… a way in which the worker could cleanse themselves and wash away the stain on their character – to do penance.

At the time, they were seen as very optimistic. They would encourage the bourgeoise, to reform these girls and train them to become domestic servants in the homes of the middle class where they would be under surveillance for the rest of their lives.” 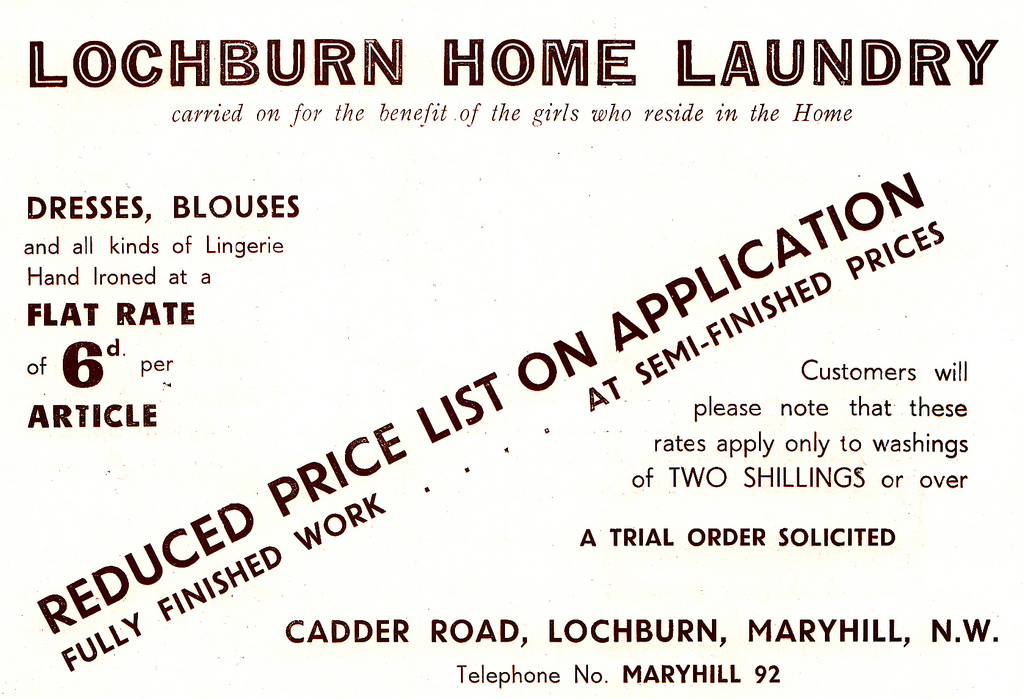 The Glasgow Magdalene Institute opened in 1812, as a response to concerns around prostitution, venereal diseases and what was perceived to be the moral decline of the city. It was based on the premise that by locking up newly ‘fallen’ women, they could be saved from a life of immorality.

Through industrial work and Christianity it was hoped they would ‘learn their place’ in society.

While they were referred to as prostitutes, this did not mean they were sex workers. Instead, the term was used describe a ‘type’ of woman and could refer to single mothers, socialists, mill girls and girls dressed ‘immorally’. They were often orphans or from single parent families and many had been sexually assualted. To be admitted, they couldn’t be pregnant or have syphilis and had to be willing to submit to discipline. Through industrial work and Christianity it was hoped they would ‘learn their place’ in society.

It formed part of The Glasgow System, which encompassed legislation (the Contagious Diseases Act which permitted plain clothes policemen to test women for venereal diseases; if a women were to refuse she could have to prove to a court that she was not sexually active), the Lock Hospital (where women and young girls presumed to be prostitutes were treated for venereal diseases) and the Magdalene Institute. The police and the medical profession worked together to ‘cleanse’ the city of women they deemed in need of ‘moral rehabilitation’.

The Institute moved to Lochburn House in Maryhill in 1864, where it remained until its closure in 1958. An 1881 Census lists 95 “inmates” all aged mostly aged between their late teens and early twenties. Their professions are listed as “washer”, “laundrymaid” and “scullerymaid”. Mostly they come from Glasgow, Greenock, Stranraer, Argyll and Bute. Although some hail from Ireland, England and even Australia. The staff are listed as Assistant Superintendent of Sewing, Washing, Clothing and Laundry and other titles. 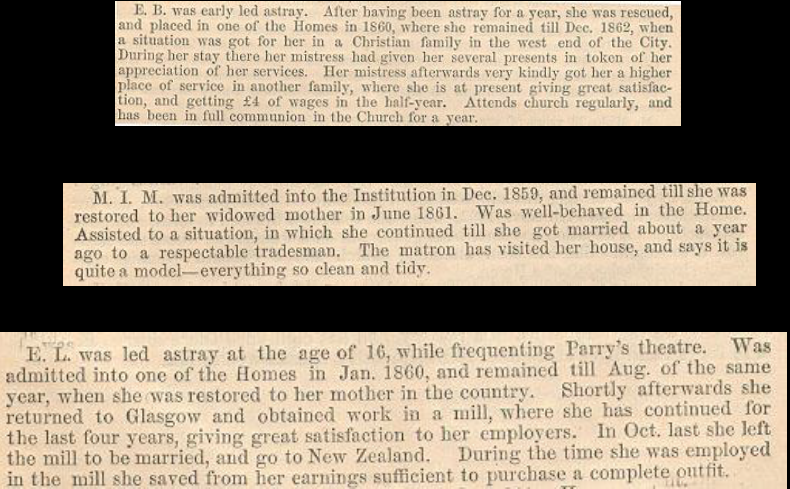 The fifth annual report of the Magdalene Institution, Glasgow, contains some case studies:

“L.K., 22 years of age. Admitted April 1862. Parents respectable though poor. She was early sent out to service. Until about five years ago, her habits were regular and she attended religious ordinance. But then she fell before the wiles of an unprincipled villain, who, though a married man, with a wife and family elsewhere, promised marriage. Having been thus deceived and ruined, she abandoned herself to a life of sin and rather than re-enter he parent’s house, took up her abode in houses of ill fame. Earnestly desiring a change of life she sought a place in the Homes where her conduct was most exemplary.”

Having been thus deceived and ruined, she abandoned herself to a life of sin

“L.M., aged 22 (admitted to the Institution 27th Dec., 1861, left in May 1862), was brought up till her 13th year in the country. Attended school for eight years and also Sabbath School. Was a servant nearly five years with one family in the neighbourhood of this city, and afterwards came into one in Glasgow. About five years ago, she fell into sin and was obliged to leave her situation. For twelve months she supported herself and child by sewing in a warehouse; but then her child died, her own health gave way and she obtained entrance into the Infirmary. When discharged, she fell into a most despondent state of mind, and the tempter suggested self-destruction. The danger was, however, mercifully averted for a girl recommended her to come here.”

The report goes on to list where inmates were “disposed of” – to warehouses, domestic services, mill work, and to other houses of refuge. It also records seven women that year as leaving “clandestinely”. 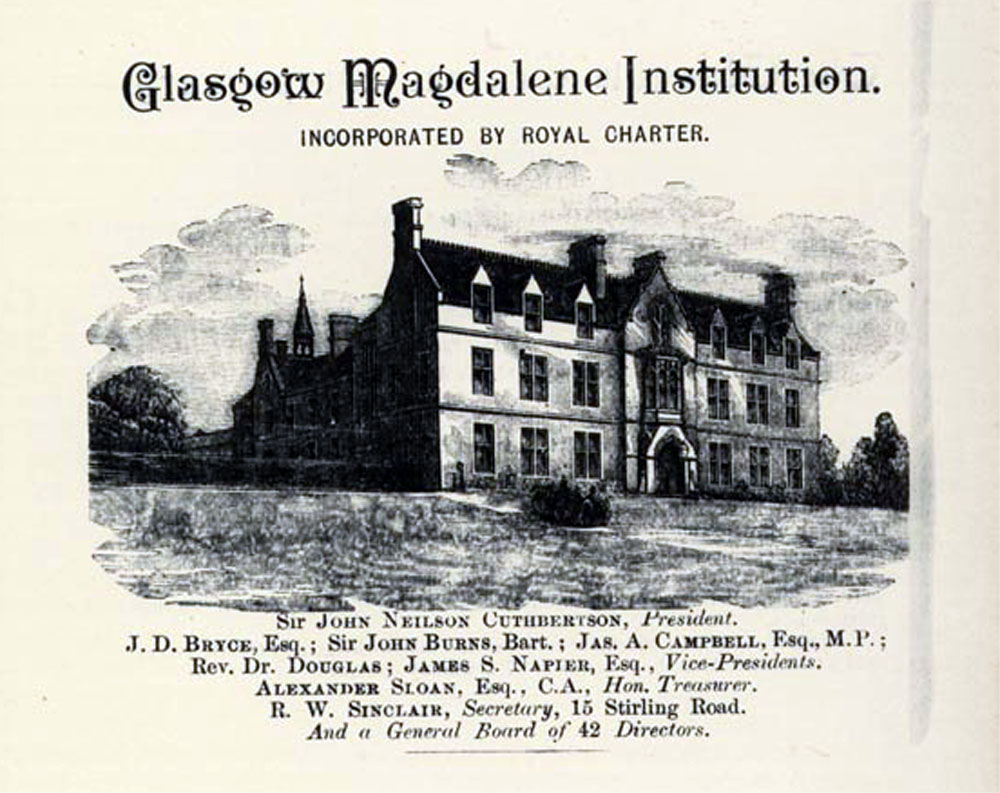 The Women’s Support Project, a Scottish charity is now trying to raise awareness of the Institute. It held a talk on the subject late last year and has been gathering ideas on how to create an appropriate memorial to Glasgow’s ‘forgotten women’ on the site of the institute.

Linda Thompson, national coordinator said: “We have loose plans for the memorial and that is why it is crucial to hear from other people as to what they think should be done. There are ideas for a commemorative space/garden along with oral histories, installations, sculptures etc.  There is nothing definite as yet and of course we have no funding for it. It will take time but it feels 2019 is the year it should happen. It is also the 25th birthday of the local women’s centre so that seems apt.”

To be kept informed about the campaign, folllow the Women’s Support Project Facebook Page.

If you value independent media that brings you the stories others won’t, become a supporter of CommonSpace.