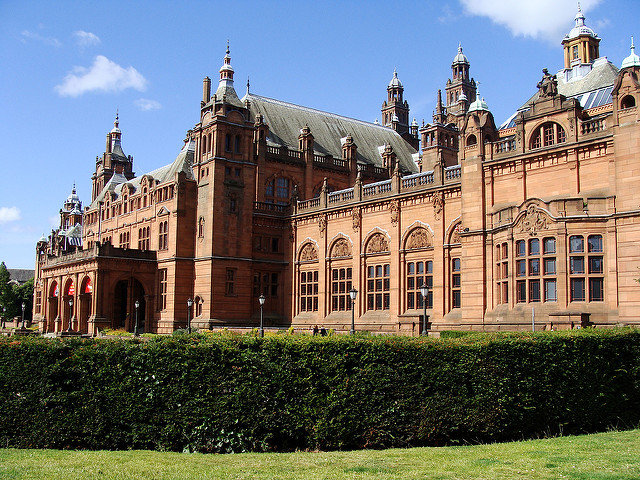 250 ATTENDEES at the arms fair controversially taking place in Glasgow from 26-28 June wined and dined in the main hall of Kelvingrove Art Museum on Tuesday evening [26 June], leading to peace campaigners to question attempts by the Council to distance themselves from the event in recent days.

The activists – who held a demonstration as the arms fair at the SECC began on Tuesday of over 500 people – discovered the VIP event, and claimed that the council and Glasgow Life were trying to keep the arms fair guests use of the publicly owned Museum secret.

Hundreds of arms fair “VIPs” wined and dined in secret at one of Glasgow’s most iconic publicly owned buildings yesterday evening, 26 June.

Like the SECC, the Kelvingrove Art  Museum is managed by Glasgow Life , a City council arms-length company, and a spokesperson confirmed that the event had been booked by Clarion Events, the same company that was behind the organisation of the Underwater Defence and Technology convention in Glasgow.

“This was a commercial hire of the Kelvingrove Art Gallery and Museum paid for in full by Clarion Events for a private function held outwith the museum’s normal public opening hours,” a Glasgow Life spokesperson told CommonSpace.

Cllr Graham Campbell spoke at the protest outside the arms fair – which includes arms manufacturers from across the world, including BAE Systems and Babcock, the two companies heading up the Trident renewal programme – stating that the Council doesn’t “support what’s happening in there”, citing the fact that the bidding application to host the convention was initially made by the previous Labour Council.

The deputy leader, Cllr David McDonald, and leader, Cllr Susan Aiken, of the SNP-led Council issued a statement on Monday admitting “some people have expressed their opposition to this conference being held in the city” and confirming that they had removed the People Make Glasgow logo from the arms fair website, saying in future they would “re-examine policies and procedures” on convention hosting in the city.

The statement was a partial climb-down from McDonald’s stuanch defense of the convention on 17 May in which he seemed to suggest it was not an Arms convention, a claim that led to campaigners saying he was trying to “whitewash” the convention.

A spokesperson for the Sink the Arms Fair coalition, which organised the June 26 protest, said that the hosting of the Clarion Events dinner suggested the attempt by the Council to distance themselves from the arms fair convention may not be entirely genuine.

A spokesperson stated: “We were shocked to find out one of the city’s most iconic cultural buildings became a home for arms dealers last night.

“The council have rightly distanced themselves from the event but this secretive luxury get-together shows bosses are still trying to cover up the administrations links to this event.

“It is now more important than ever that the council follow up with the ethical events policy which has been talked about and make events like this a thing of the past.”

Sink the Glasgow Arms Fair organised an Arts not Arms day to take place outside the Arms fair on Wednesday.