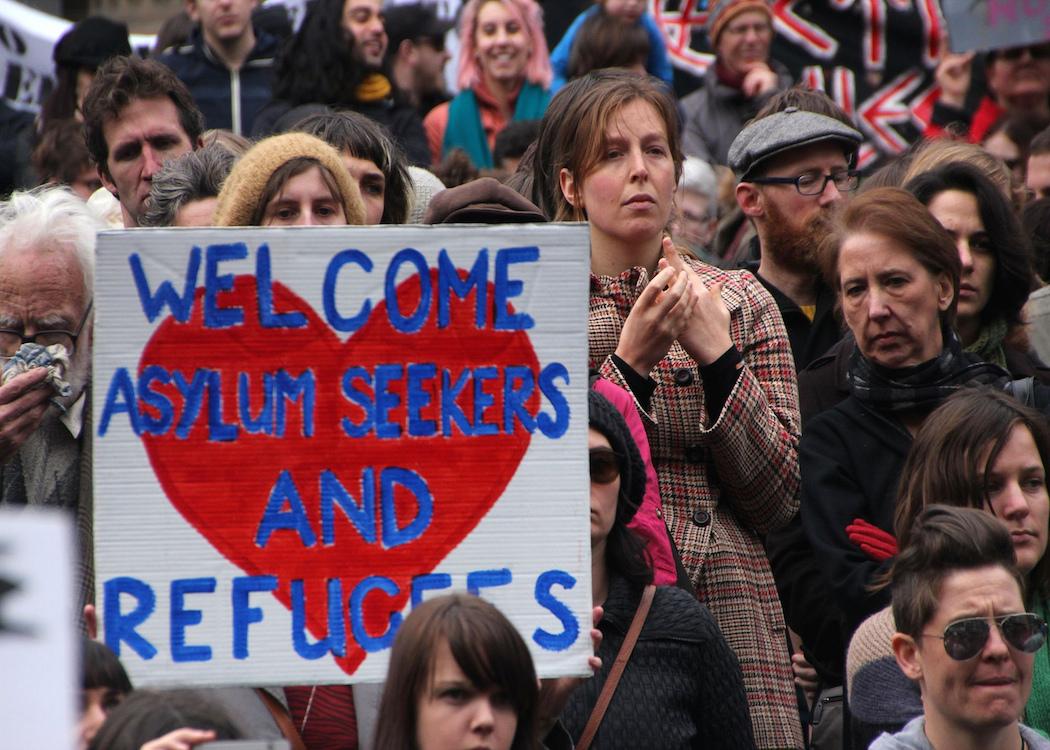 In the last four days an alleged racially motivated gang attack took place in Fife, violent threats were made to the Strathclyde Muslim Students Association, a Muslim cultural centre was set on fire in Bishopbriggs, while Police Scotland have intervened in numerous online cases of racially motivated hatred.

Leaders at two of Glasgow’s biggest mosques have urged members to be cautious and vigilant with personal safety following the incidents.

Equality campaigners have responded by organising to show solidarity with the new refugee community arriving in Scotland from Syria, as well as any racial minority group who feels threatened following recent event.

The event, planned for 2pm on Buchanan Street, states: “Come along. Bring a flag, a candle, anything. Show those that choose to divide us that we will be defiant in the face of fear.

“Lets allow Scotland to continue its proud history of welcoming refugees and show the world that love can mobilize as quickly as any campaign of terror.”

Another campaign event – #WalkWithYou: Scotland United Against Islamophobia – aims to provide practical security for anyone who feels threatened by recent attacks.

The event page reads: “#WalkWithYou is about giving practical support to people who feel threatened by islamophobia in public. Tweet #WalkWithYou to tell Muslims in your area that if they feel unsafe, you are available to keep them company at the bus stop, at the shops or during a lunch break. Anyone feeling threatened can search for #WalkWithYou and find people near them willing to help out. Ultimately, we aim to form a network of solidarity against islamophobia across our communities.”

Police Scotland released a statement following the Paris attacks re-emphasising the seriousness of hate crime and confirming that arrests have already taken place in Scotland.

Political leaders have also united in support of efforts to demonstrate solidarity and resist a rush to war or a clamp down on civil liberties.

A spokesperson for Rise, the new socialist alliance, added: “Rise stands shoulder to shoulder with Muslims under attack. We stand utterly opposed to the right-wing press and the demonisation propaganda which only pours fuel on the fire.

“It is at times like this that the progressive movement of all stripes must unite to defeat the hatred peddled by racists. It is abhorrent that such forces utilise the tragic events in Paris to further their toxic agenda.”

Patrick Harvie MSP and co-convener of the Scottish Greens similarly condemned any attempt to direct any hostility towards Muslims and other minority communities following the deaths in Paris.

“These attacks are designed to provoke a backlash, to provoke the mindless reaction we’ve seen in parts of Scotland, to drive more disaffected and angry young people, who experience anti-Islamic prejudice every day, into the arms of the terrorists. We must deny them the backlash they seek,” Harvie said.

“Liberty, equality, fraternity – these are values which should be at the heart of European society and they are under direct attack. As we prepare to welcome those who have been forced to flee this violence, and in memory of those who have been lost in the attacks in Paris, we must live by those values as never before.”

The call for unity and opposition to racism coincided with the arrival of the first 100 Syrian refugees to Scotland following the deadly civil war which has caused the deaths of over 80,000 people and displaced millions of people.

Minister for Europe and International Development Humza Yousaf, who himself has been subject to online racist abuse in recent days, stood firm in welcoming those seeking refuge in Scotland: “This is a proud day for Scotland. I would like to extend the warmest of welcomes on behalf of the people of Scotland to the Syrian refugees who have arrived in Glasgow today, and wish them all the best as they are supported to start their new lives here.

“These people have fled terror and tyranny and are some of the most vulnerable among those affected by conflict in Syria. They have arrived directly from refugee camps and we have been working closely with the Home Office who have robust and thorough security screening processes in place. They will now travel to a number of communities across Scotland.”

While campaigners were vocal in opposition to any threat of hate crime, thousands of people have continued to contribute to support groups for new refugees.

Robina Qureshi, director of Positive Action in Housing, told CommonSpace that Scotland has been a welcoming place for refugees with widespread offers to provide homes for those fleeing violence.

“Since August there has been a huge groundswell of opinion in favour of refugees, and a feeling of being ashamed of the U.K. government. Nowhere is this better evidenced than in the 2,300 households who have registered with our Room for Refugees project to take in refugees, and is growing by around 75 households a week from the islands to the cities, rural to urban,” she said.

“Attitudes have changed greatly. People are not swallowing the scapegoating by government of Muslim or refugee communities, who after all, are the victims of the aftermath of western interference in other people’s countries. The tide of opinion does not look as if it’s turning.”

On ‘ ScotlandWelcomesRefugees.scot ‘ individuals can offer practical support, donate or offer to host an event in solidarity with those arriving in Scotland.