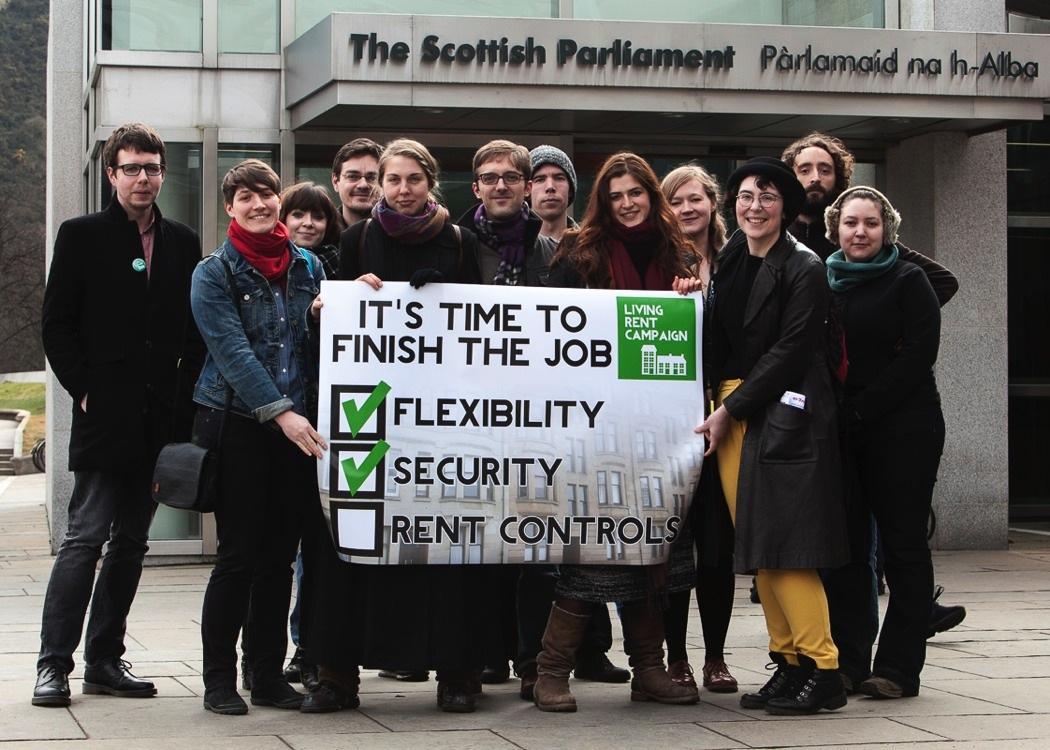 Disappointment that anti-poverty measure is missing from SNP manifesto

HOUSING JUSTICE CAMPAIGNERS have expressed concern that an SNP promise to deliver a “national system of rent controls” does not appear in the party’s Holyrood manifesto.

The campaign for rent controls – which aims to improve the quality of private housing and reduce high cost pressures – has won support across Scotland’s biggest party and welcomed a new policy motion in Spring .

Yet the SNP manifesto, launched yesterday [Thursday 21 April] in Edinburgh made no mention of the policy that was backed by the party’s membership.

CommonSpace asked the first minister when the SNP would deliver its conference policy to move beyond the limited Private Housing (Tenancies) Bill towards a full “national system of rent controls”.

Despite the bill only containing an optional and localised ‘rent ceiling’ (which can’t reduce rents), Sturgeon replied that the bill met the policy voted through by the party membership.

“It’s troubling that the SNP has not offered any real solutions to rapidly rising rent levels in its manifesto.” Gordon Maloney, Living Rent

“The legislation was passed just before the parliament was dissolved for the election, so it will be delivered when the legislation is enforced. And that will happen early in the next parliament,” Sturgeon said.

However, the campaign which has won support across the SNP for a full rent controls system disagrees.

Gordon Maloney, an activist with Living Rent who also authored a detailed report on rent controls , told CommonSpace: “As a rapidly growing number of Scots are forced to turn to the unaffordable and insecure private rented sector to find a home, it’s troubling that the SNP has not offered any real solutions to rapidly rising rent levels in its manifesto.

“Whilst The Living Rent Campaign welcomed the progress made in the new private tenancies bill, we had hoped that the new parliament would prove to be a bolder one and introduce a stronger system of rent controls.”

According to the Joseph Rowntree Foundation, the number of private renters in poverty has almost tripled in a decade from 11 to 29 per cent.

Sheppard told a fringe meeting at the party’s October 2015 conference that he would support campaigning within the SNP to make full rent controls official policy.

Last month the SNP told CommonSpace that “Any further action [on rent controls] cannot be taken without the normal process of consultation with stakeholders and parliamentary scrutiny and debate – and would therefore be an issue for a future Scottish Parliament session.”

Rent costs increased by 6.6 per cent last year, well above the rate of inflation and pay.

According to the Joseph Rowntree Foundation, the number of private renters in poverty has almost tripled in a decade from 11 to 29 per cent.

Maloney, who previously led the National Union of Students (Scotland) in its support for rent controls, added: “There is a clear consensus in Scotland now that the only way to tackle this housing crisis is by the introduction of rent controls.

“The SNPs own membership recently recognised how pressing the issue of unaffordable rents is, and have made it clear they want their leadership to make rent controls a priority. By leaving rent controls out of their manifesto, the SNP are ignoring the needs of Scotland’s tenants.

“Ensuring everyone in Scotland has an affordable, safe place to live should be one of the top priorities for any political party aspiring to government, and we urge the SNP leadership to listen to its members and voters and put rent controls back on the agenda.”

Over 100,000 private renters in Scotland currently have their high housing costs subsidised by the social security system, which passes approximately PS1.8bn in subsidy to landlords through ‘Housing Benefit’.

Rent controls are in place across Europe, including in the Netherlands, France, Germany, Spain, Denmark, Norway and Sweden.