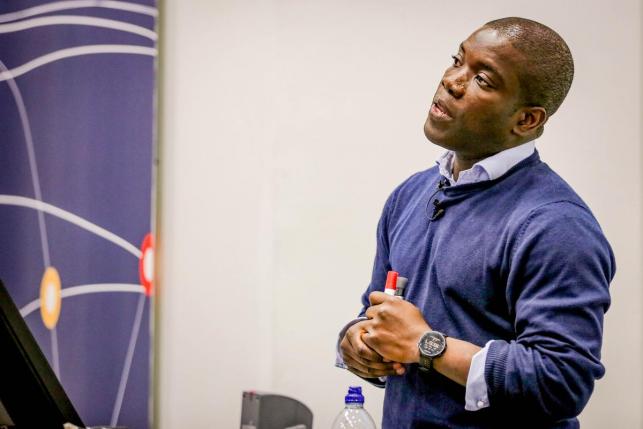 ‘Rogue trader’ Kweku Adoboli was jailed after he lost a Swiss bank £1bn, but since his release, he has worked to reform the banking system

JAILED banker turned reform campaigner is facing imminent threat of deportation after being transported from Scotland to Colnbrook Removal Centre near Heathrow, supporters have announced.

CommonSpace understands that Adoboli is currently en-route to the London based immigration removal centre in preparation for imminent deportation to Ghana, despite ongoing legal and political representations against the move.

He is expected to arrive in London at around 7pm on Wednesday evening [13 September].

Adoboli was jailed for fraud in 2012 after he lost Swiss bank UBS £1bn in a series of “reckless” off-book trades, after serving four years in prison Adoboli turned whistleblower and has worked to educate people on the cultures and practices in banking which he said led to his mistakes.

Speaking with CommonSpace in December 2017, Adoboli said he was influenced by a banking culture which promoted risk: “I was placed on a trading team responsible for a $50bn dollar market, the equivalent of the GDP of a small country.

“In 2010 management told us to take more risk to help to rebuild the bank after the crash.

“There’s so much pressure and conflict in the system that when ordinary people start working within it they don’t realise they are working in a way which hurts society,” he explained.

Adoboli has been supported by his MP, Hannah Bardell, who has made persistent attempts to raise the issue and help her constituent. Speaking to CommonSpace, Bardell said:  “I’m deeply concerned to hear Kweku has been transferred.

“The move of deportation centres and the fact that they are pushing ahead before the judicial review is heard is unjust and is clearly ignoring the will of both UK and Scottish Parliaments.”

Lothians MSP’s Kezia Dugdale and Andy Wightman are amongst over 100 other politicians across the UK who called on the home secretary Sajid Javid to halt the deportation.

Speaking to CommonSpace as news of his transport to London was announced, Dugdale said: “It is extremely worrying that Kweku has been moved to Harmondsworth Immigration Removal Centre.

“I share the deep concerns of many about the Home Office’s actions, and urge the Home Secretary to listen to Hannah Bardell and the 100 elected politicians calling on him to intervene in this case – and he must do so today.

“Deporting someone who is now making a highly positive contribution to society here in the UK would be a shameful act.”

Adoboli previously accused the Home Office of racism, suggesting his race and nationality influenced his treatment whilst other bankers and senior management were protected.

Read More: Reckless gamble: Meet the rogue trader risking everything to blow the whistle on the banking system

Speaking to CommonSpace, representatives for Adoboli said that a legal submission had been lodged, but that the Home Office appeared intent on “riding roughshod over fair legal process”.

“As well as deeply upsetting, this amounts to a serious abuse of both its power and the law.”

Hannah Bardell MP is expected to hold a cross-party press conference and “rally of resolve” tomorrow [Thursday] to show support for Adoboli alongside MPs and other supporters.

Supporters have been urged to write to the home secretary, contact their local MP about Adoboli’s case, sign the petition and spread the message using the #KeepKweku hashtag.

This is a developing story.