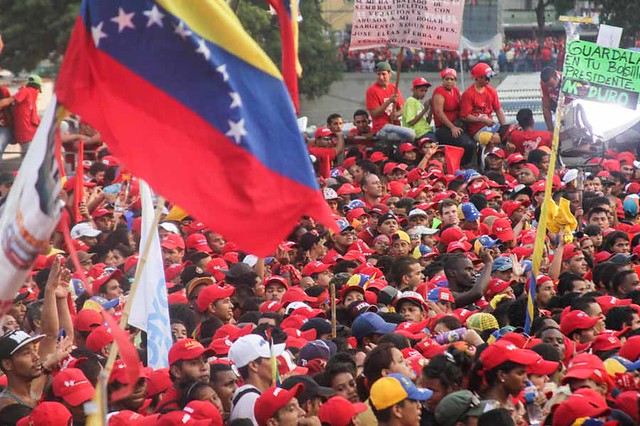 MSPs have faced calls from campaigners to oppose US-backed attempts at regime change in Venezuela, following an attempted military uprising against the government of Nicolas Maduro, instigated by opposition leader Juan Guaidó.

The South American nation saw violent clashes in the wake of a three-minute video address by Guaidó, released in the early hours of 30 April, in which the opposition leader announced he was “beginning the final phase of Operation Freedom” whilst surrounded by several men in uniform outside a Caracas military installation.

Guaidó, the president of the opposition-controlled National Assembly, declared himself ‘interim’ president in January based on a controversial interpretation of the Venezuelan constitution, and has since pursued a campaign to unseat Maduro, who has so far maintained control of Venezuela despite years of domestic unrest and escalating economic crisis.

However, this latest effort to topple the sitting government appeared to stall shortly after it began, with uncertainty reigning over precisely how many rogue members of the Venezuelan armed forces supported the attempted coup, despite Guaidó’s claim that Maduro had lost the support of the national military.

In an hour-long address on Tuesday night, Maduro claimed that the botched uprising had been swiftly put down, accusing both Guaidó and his fellow opposition politician Leopoldo López of seeking to create a pretext for a foreign military intervention. Maduro said: “They failed in their plan. They failed in their call – because the people of Venezuela want peace.”

READ MORE: ‘It’s incumbent upon all of us to do something’: Venezuela solidarity protest at US consulate in Edinburgh

These developments have sparked calls from the trade union-backed Scottish Venezuelan Solidarity Campaign (SVSC) for the Scottish Parliament and those progressive parties represented within it to denounce this week’s attempted coup.

Thus far, the Scottish Government has made little comment on the Venezuelan crisis, although Stephen Gethins MP, SNP spokesperson for international affairs and Europe, made a statement in the House of Commons in January condemning all violence in the country, saying there was “a desperate need for free and fair elections.”

Following a meeting of their executive committee in Glasgow on Tuesday night, the SVSC said in a statement released to press: “Today’s outrageous attempt by the Venezuelan opposition, with encouragement and support from the Trump administration and its allies, to spark a violent uprising against the legitimate Venezuelan government of Nicolas Maduro deserves worldwide condemnation.

“Progressive movements across Latin America know too well what the reality of a US-backed coup d’état means. The aspirations of ordinary working class people ‒ the people who, in Venezuela, have benefited most from the social and economic policies advanced by the Bolivarian Revolution ‒ are discarded in favour of US interests, with poverty and powerlessness imposed on the people and enforced through disenfranchisement, intimidation and violence.

“The Scottish Trades Union Congress sent a powerful message of solidarity to Venezuela earlier this month when it unanimously reaffirmed its support for the Bolivarian Revolution in the face of threats of US-sponsored regime change. It is now time for the Scottish Parliament and all progressive-minded parties in Scotland to do the same. We encourage all supporters of freedom and democracy to challenge their elected representatives to stand up for Venezuela.

“This weekend, as thousands of trade unionists in Scotland take part in May Day marches, parades and socials across the country, we encourage them to bring Venezuelan flags, banners and placards to show their continuing solidarity and support with the thousands rallying throughout Venezuela in defence of the Bolivarian Revolution and against the attempted coup.”

In April this year, the Scottish Trades Union Congress (STUC) reaffirmed their support for Venezuela’s Bolivarian Revolution after an emergency motion was proposed at their 122nd Annual Congress in Dundee.

The motion was carried unanimously, and called upon the STUC Council to urge the UK and Scottish Governments to condemn all sanctions against Venezuela, endorse peace initiatives proposed by Mexico, Bolivia and Uruguay, defend Venezuela’s sovereignty and its right to sell-determination, and “reject and oppose any external interference in the internal affairs of Venezuela, especially from the United States, including any military aggression; and reject and oppose any attempt to change the government by illegal, unconstitutional and/or violent methods.”

The motion further called for the immediate and unconditional lifting of “all sanctions by the United States and the European Union which violates international law, thus easing the suffering of the poor and the most vulnerable.”

Moving the motion, Sam McCartney of Unison Scotland commented: “Over the years, this Congress and the STUC have supported social and economic change to empower the masses in many countries. Only a few years ago, we sent our support and solidarity to fellow workers and comrades in South America. Let’s continue our support, let’s send our support to Venezuela and the legitimate government.

“Let’s start by demanding that the US ceases its interference in Venezuela. Let’s demand that the Bank of England and Deutsche Bank in Germany release and return the billions of pounds of gold they owe back to Venezuela.

“Let’s stop the bullies of the world imposing their dogma on working class people.”

Ann Joss of RMT Scotland, seconding the motion, added that the Trump administration is “agitating for war, and this position is being supported slavishly by the United Kingdom”.

Joss continued: “They are using the argument that this is to solve the ‘humanitarian crisis’. What a load of rubbish! It was them that created the crisis with their economic sanctions. Selective amnesia comes to mind.

“If they get away with this without challenge, then they will further concentrate their efforts on Nicaragua and Bolivia.”