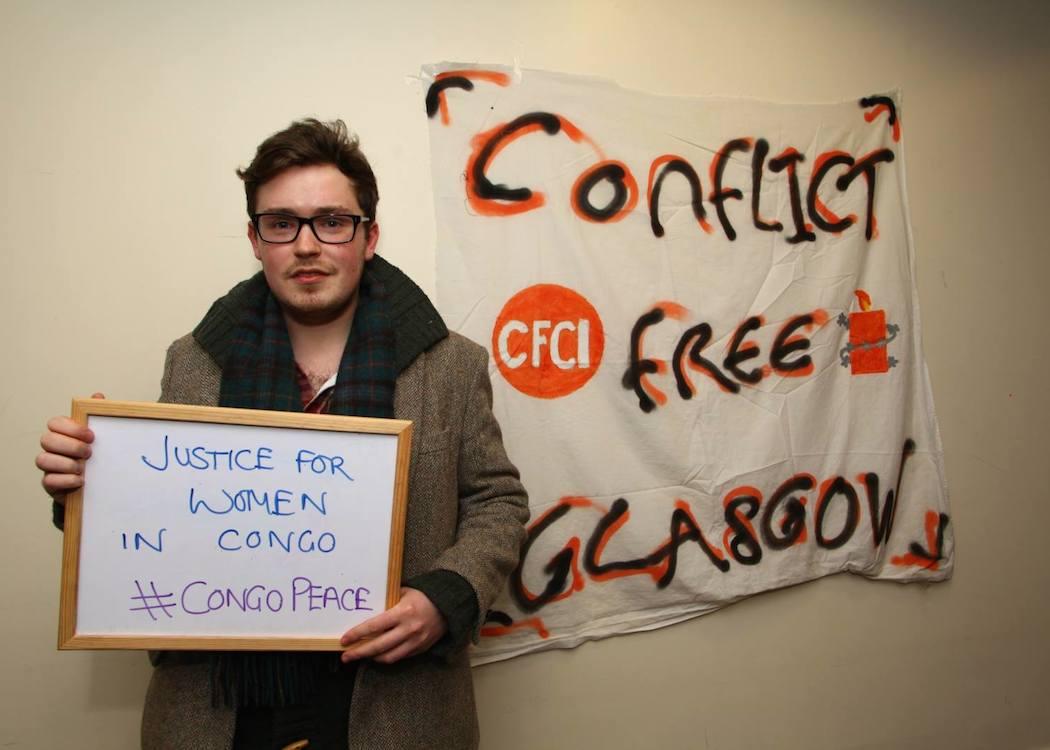 STEPS to recognise the dangers of conflict minerals to human rights in African war zones have been welcomed by student campaigners for ethical procurement at the University of Glasgow.

Pressure to introduce tighter guidelines on the purchase of electrical equipment, often linked financially to the funding of brutal wars in Congo, Sudan and Somalia, has led to a new pledge by the university to “ensure ethical supply chains” and “recognised the issue of conflict minerals as a significant human rights concern”.

The wider issue of conflict minerals – including blood diamonds, gold and coltan – have been partly to blame for funnelling billions of dollars to armed conflicts, providing the funds to break United Nations arms embargoes in conflicts responsible for millions of deaths.

“This statement helps to expose these atrocities, encourages action by other UK universities and, of course, puts pressure on companies to take the necessary steps towards certified ‘conflict-free’ electronics.” Ruth Brown, student campaigner

Ruth Brown, a Glasgow campus organiser for Enough Project’s ‘Conflict Free Campus Initiative’, said: “Students have fought long and hard to have the university acknowledge this important issue and give serious consideration to the numerous human rights abuses which are linked to the trade in conflict minerals including child labour, violence against women, working conditions which amount to modern slavery and the death of millions of civilians in countries like Congo.

“This statement helps to expose these atrocities, encourages action by other UK universities and, of course, puts pressure on companies to take the necessary steps towards certified ‘conflict-free’ electronics. The energy and ambition of Glasgow University students to drive change both locally and globally is incredible, and I hope other universities around the country will follow suit.”

‘ Enough Project ‘ leads policy campaigns to encourage development and end violence in some of the world’s most bloody and enduring conflict zones.

The pledge by the university follows its decision in late 2014 to become the first UK university to back full divestment from the fossil fuels sector.

However, the university does retain substantial investments in the arms trade , which is also complicity in fueling the fire of war across the planet on an industrial scale.

University ‘ethical procurement policies’ set guidelines for investment trusts – such as pension and endowment schemes – over what businesses match a given organisation’s social objectives.

Conflict minerals are used in the production of vast swatches of the world’s electrical devices, including computers and mobil phones.

Similar procurement policies opposing the purchase of equipment with conflict minerals have been adopted by the universities of St Andrews and Exeter.

Explaining the endorsement, David Newall, secretary of court at Glasgow, released a statement at the end of January. He said: “In 2014, the University of Glasgow Students’ Representative Council supported a motion relating to the Conflict Free Campus Initiative, asking the University of Glasgow to make the reduction of the use of conflict minerals a priority in its procurement policy.

“The University of Glasgow Court set up a working group to consider the matter. The group recognised the issue of conflict minerals as a significant human rights concern. In that context, it concluded that the then recent introduction into University procurement activity of the Sustainable Procurement Programme (Supply Chain Code of Conduct) was a very positive measure, aimed at ensuring ethical supply chains.

“While it would not be practical to apply it retrospectively, it went a significant way to addressing key issues in the motion’s accompanying petition, with a positive direction of travel. The University Court agreed with the conclusions of the group. The Supply Chain Code of Conduct is in operation at the University of Glasgow as a part of University’s Procurement Policy, incorporated into the all procurement and supply chain activities including tendering and contract procedures.”

Picture courtesy of Coalition for a ‘Conflict-Free’ Glasgow University