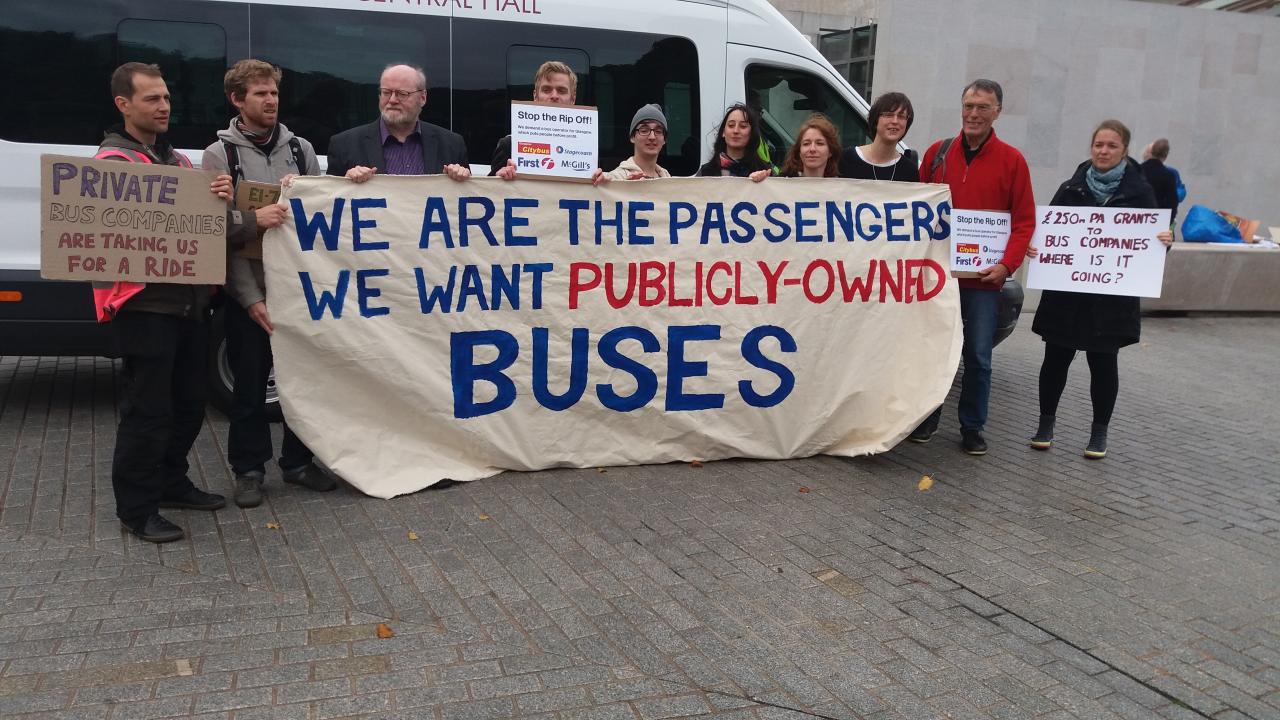 CAMPAIGNERS today [3 October] rallied outside of the Scottish Parliament in support of the public ownership of buses as the Transport Bill was discussed by MSPs.

Campaigners have argued in favour of a public ownership model of the kind Edinburgh enjoys, claiming that private companies are failing the public due to cuts in services and rising fares.

In addition to a publicly-owned Glaswegian bus company, Get Glasgow Moving advocate for a city-wide smartcard scheme with a daily price cap, along with bike-hire stations across the city, free access for concessionary card holders, a publicly-owned Transport Authority for Glasgow and a coordinated, long-term strategy for meeting the city’s transport needs.

The petition was today handed to members of the Rural Economy and Connectivity (REC) Committee, following a Panelbase poll earlier this year which found 58 per cent of respondents in support of public ownership.

A further Panelbase poll, commissioned by the Scottish Greens, also found earlier this year that 58 per cent of Scots believe bus services should be run by public operators, with only 15 per cent believing that private companies should remain in control of the nation’s buses.

Placing emphasis on the need for reform in Glasgow’s transport sector, statistics have also shown that the most significant drop in passenger numbers has been seen in Glasgow, where fares have risen by 15 per cent overall over the past year, and by 40 per cent for the under 16s.

Speaking ahead of the demonstration, air pollution campaigner Emilia Hanna said: “Passengers are here to show that there is huge demand for public ownership of buses. The Transport Bill gives Parliament a fantastic opportunity to transform the way buses are run. People are very angry at poor bus services across many areas in Scotland. Fares are going up while services are being cut and it’s not surprising that passenger numbers are falling dramatically.

“Private bus companies are failing Scotland and we need change. The Transport Bill, in its current version does not deliver the changes needed. MSPs need to add an amendment that would allow councils to compete fairly with private companies. Taxpayers spend millions subsidising buses, and while company CEO’s are lining their pockets, passengers are seeing fares going up and routes cut. People in Scotland saying give councils control and make sure passengers get a decent service.”

“By increasing bus use we can cut air pollution and congestion, reduce climate emissions, and make our towns and cities better places to spend time. The majority of people want buses in public ownership and MSPs need to heed these calls.

Prior to the Transport Bill being reviewed today, Scottish Green transport spokesperson John Finnie MSP commented: “The Transport Bill is a golden opportunity to arrest the decline in bus patronage and give communities the reliable, affordable services they are crying out for. Sadly, as we heard today, there’s not a lot in the bill that would meet that aim.

“I think free public transport for everyone in Scotland is the only way to go. It’s the only way we’re going to create a more sustainable transport network and deliver social justice.” Get Glasgow Moving campaigner Ellie Harrison

“The bill as it stands will enable public bodies to step in where private operators fail but this won’t stop cherry-picking of profitable routes and it doesn’t address issues such as lack of planning for new developments and lack of road space to help buses beat congestion.

“Successive governments have been happy to spend millions on motorways and encourage the growth of air travel, yet bus services – the most common form of public transport – have been left to wither. It’s clear there’s still work to do to strengthen the Transport Bill if we want better buses.”

Speaking to CommonSpace, Get Glasgow Moving campaigner Ellie Harrison said: “I’m speaking personally, but I think free public transport for everyone in Scotland is the only way to go. It’s the only way we’re going to create a more sustainable transport network and deliver social justice.

On the Transport Bill debate, Harrison commented: “Nearly half of the debate is taken up on smart-ticketing infrastructure – whereas if you go to Berlin for example, you just hop on the bus [for free]. If we were thinking a bit bigger picture, and we weren’t so hung up on revenue protection, we’d save so much money. And that’s the problem with the privatised system – we’re haemorrhaging money. Private bus companies are extracting all of the profit, and government subsidies are filling in the gaps. It shouldn’t be like that. If there’s any profit to be made from a public transport system, it should be reinvested in it.”