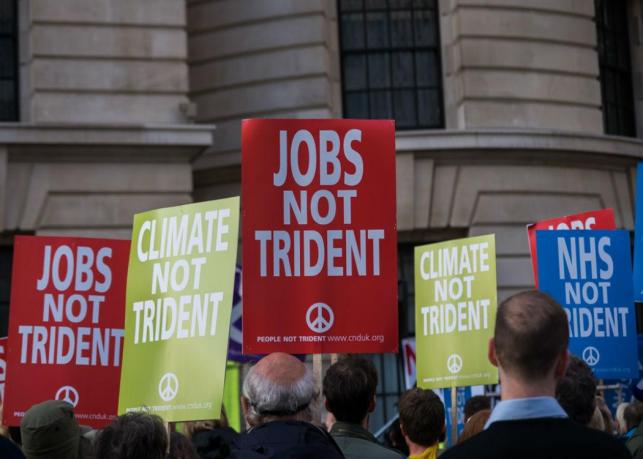 A LONG AWAITED BREAKTHROUGH against the nuclear armed states – including the UK – is expected tomorrow [Friday 7 July] by peace campaigners coordinating Nuclear Weapons Ban Treaty efforts at the United Nations.

With the second round of Treaty negotiations underway between 130 states from across the planet, CND Scotland have said that agreement is imminent on the specifics of a ban treaty.

Janet Fenton, Vice Chair Scottish CND, said that the treaty “could be adopted as early as 10:00 AM on Friday” in New York – which would represent a giant legal leap forward for the global peace movement, and further isolate the nine nuclear armed states.

The treaty negotiations represent an attempt to expand what types of weapons are classified as illegal under international humanitarian laws. Global movements for disarmament and peace have previously focused on the use of land mines, cluster bombs, and chemical weapons, which through campaigning and legal agreements have faced added condemnation and pressure on states to abide by ratified codes.

123 states backed a nuclear ban treaty on principle in October 2016, and talks have since progressed on its contents.

Fenton, in an update from the Scottish delegation, explained: “The United Nations is convening negotiations on ‘a legally binding instrument to prohibit nuclear weapons, leading towards their total elimination’. This new international agreement will place nuclear weapons on the same legal footing as other weapons of mass destruction, which have long been outlawed.

“Despite over 130 member states supporting the treaty being negotiated, the nuclear armed states are absent but this will not prevent the treaty from impacting on them.

“In recent years, the catastrophic humanitarian consequences of any use of nuclear weapons have been shown to risk our continued existence on this planet and the maintenance of the world’s nuclear arsenal has been shown to be incompatible with successfully achieving and of the Sustainable  Development Goals.

“The inability of any state of civil society organisation to respond to a nuclear exchange has been highlighted by the International Red Cross and Red Crescent and it is this which has driven the UN to hold this Conference, tasked to produce a legally binding treaty to prohibit nuclear weapons, leading to their elimination.

“The treaty could be adopted as early as 10:00 AM on Friday, 7 July, New York time.  The president, UN Ambassador Elaine Whyte Gomez (Costa Rica) hopes to achieve consensus on the draft treaty by the end of today.”

The UK, which holds its nuclear submarine arsenal at Faslane on the Clyde estuary and holds further nuclear weaponry at Coulport nearby, plans to rearm its Trident fleet. The Tories are strongly in support of spending over £100bn on new weapons of mass destruction. The Scottish Government is opposed – and supports an nuclear free independent Scotland.