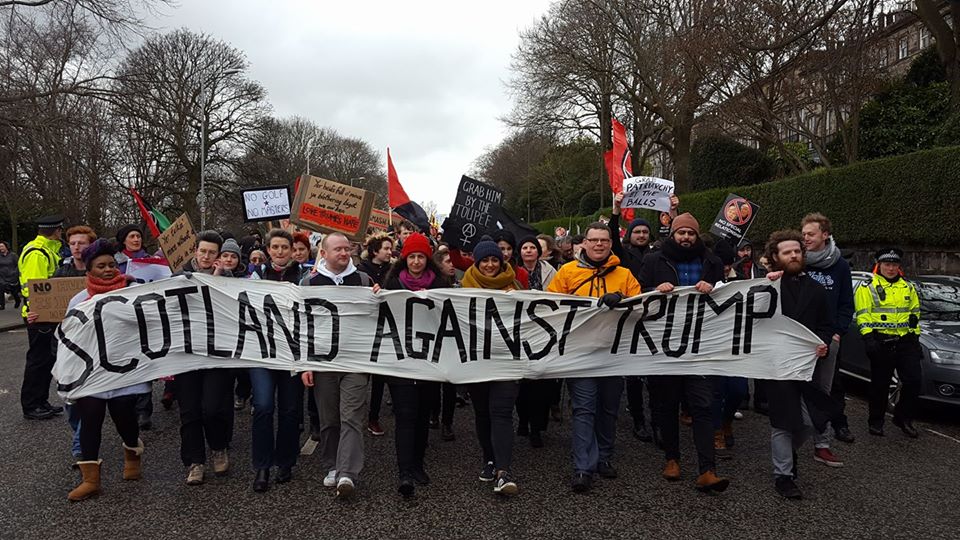 CAMPAIGNERS have warned against attempts to “sneak” US President Donald Trump into Scotland during his European tour this month.

Trump was forced into a humiliating climb-down from an official state visit after it was dropped from the Queen’s Speech by weakened UK ally, Prime Minister Theresa May.

Trump is expected to drop-in to one of his golf resorts in Ayrshire or Aberdeen in mid July, some time close to his visit to France to meet President Macron on 14 July.

Speaking to CommonSpace Jonathon Shafi, who organised protests in Scotland against Trump at the time the Muslim Ban was first proposed, said: “Trump is having to duck and dive to avoid mass protests. This is an incredible situation for a US President to be in.

“However much notice we have, we will be there to protest his visit should it take place. So our message to the people of Scotland is this: be ready to mobilise at short notice. And make sure he gets the welcome he deserves.”

Scottish Tory leader Ruth Davidson faced criticism last week as she failed to criticise the implementation of the ban on all refugees and citizens from six Muslim majority nations from entering the US.

Davidson controlls a cohort of 13 Tory MPs, enough to win or lose parliamentary votes. She therefore has an unprecidented degree of influence over a UK Government, which she has pledged to deploy to secure a soft Brexit. However, she has made no other indication on what she will hold May’s weakend government to account on.

A spokesperson for the group War on Want said: “Millions of British citizens have already sent a very clear message to the Government that the racism, bigotry and hatred of Donald Trump is not welcome here.

“Any attempt to sneak him into the country and offer Trump a veneer of respectability for his divisive and reactionary policies will be utterly rejected.”

Trump pledged during his election campaign to shun ‘globalists’. However, since he came to power he has recommitted the US to its traditional powers, including EU brokers like Macron and Arab dictatorships like Saudi Arabia.