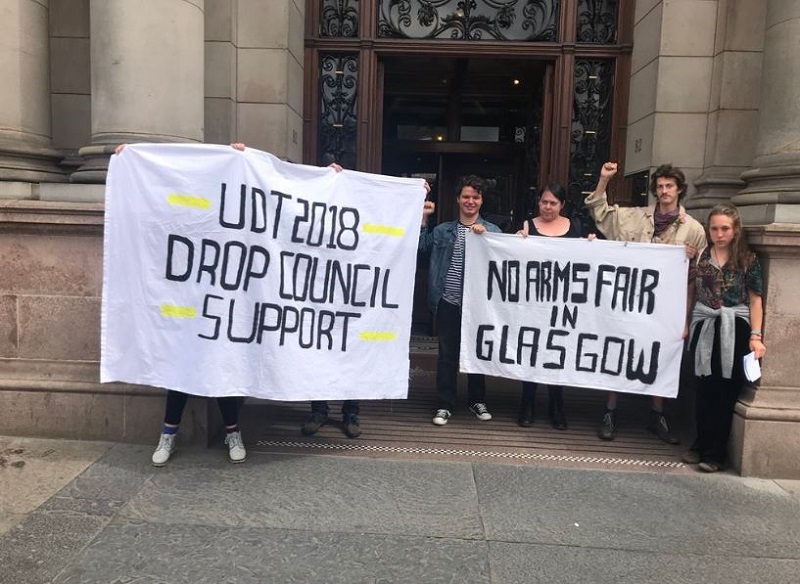 COUNCILLORS in Glasgow are being urged to drop their support for a controversial arms fair which will be held in the city later this month, with a small protest held outside the city chambers today and campaigners set to confront SNP council leader Susan Aitken later this evening [11 June].

The conference of international arms manufacturers will take place at the Glasgow SEC, which is 90 per cent owned by the Glasgow City Council, Scotland’s largest local authority, and the official webpage of the the Undersea Defence Technology 2018 event – which contains a picture of a Trident submarine – has the iconic People Make Glasgow branding.

The SNP administration has come under significant pressure to dtich their support from anti-arms campaigners, with deputy leader David MacDonald attracting fierce criticism and accusations of a “whitewash” when he dubbed the event as simply a “technology conference”.

CommonSpace understands that despite MacDonald offering to speak with campaigners directly, no meeting has been forthcoming.

The SNP administration previously denied the event had links to Trident, but CommonSpace revealed that the UK’s nuclear weapon system featured prominently on the conference programme.

Organised by Glasgow Life, an arms-length charity charged with delivering services on behalf of Glasgow City Council, the event will take place between 26-28 June.

Exhibitors include the companies behind the UK’s renewal of its nuclear defence system, Trident, BAE Systems and Babcock, as well as one of the largest arms giants Northorp Grumman, which makes stealth bombers.

Campaigners from the Sink the Glasgow Arms Fair held a short protest outside the city chambers as the SNP group of councillors met for a weekly meeting. SNP councillor Anna Richardson, who is a member of Scottish CND, refused to comment or speak to campaigners as she entered the chambers, telling CommonSpace she was late for a meeting.

One lifelong Glasgow resident, Phil, told CommonSpace as he was leaving the city chambers that he was “absolutely appalled” to learn that the council were supporting the arms fair: “Unless Glasgow councillors can go home and look their children in the eye and tell them about this, then they should ditch their support [for the event].

CommonSpace revealed last week that an Israeli arms manufacturer would exhibit equipment considered to be “integral” to maintaining the blockade of Gaza, described by human rights groups as the largest open air prison in the world. SNP MSP Sandra White, who has been critical of the event, told CommonSpace that the arms fair had no place in Glasgow.

Campaigners say they will attend a constituency surgery with council leader Susan Aitken on Monday evening to raise their concerns and ask for the leadership to withdraw its support for the event, even if it is too late for it to be cancelled completely.