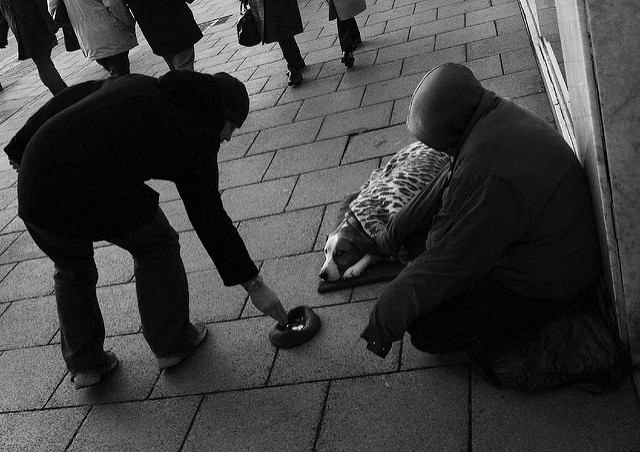 SOLIDARITY PROTESTERS will assemble on Wednesday morning outside Edinburgh’s Abbots House B&B, which activists have accused of “making a fortune” from exploiting homeless people housed there by Edinburgh City Council.

According the Edinburgh Coalition Against Poverty (ECAP), Scotland’s housing crisis has resulted in Edinburgh City Council paying out £120,000 per week to privately owned hostels and B&Bs to provide temporary accommodation for the homeless, despite questions being raised about substandard conditions within such establishments.

“Whole families are being put in one room.” Statement from Edinburgh Coalition Against Poverty

In a statement released on their website, ECAP described the environment of Abbots House in unliveable terms: “Whole families are being put in one room. Dirty and dilapidated rooms, filthy mattresses, disgusting shared bathrooms and toilets with no locks…”

Concern about conditions within Abbots House increased in the aftermath of a report in the Daily Record newspaper last August. This followed the reduction of the benefit cap in November of 2016 by the UK Government from £26,000 to £20,000, resulting in a number of families requiring shelter within such B&Bs.

READ MORE: Policy Briefing: What is the government doing about homelessness?

Speaking to the Daily Record, a spokesperson for Abbots House reportedly said their properties met the standards required by the council.

ECAP – along with associated campaign groups North Edinburgh Action Group, All About Me and Power to the People, which have helped organised the planned protest – ais demanding that Edinburgh City Council cease putting families in such B&Bs, take immediate action to drastically improve the “appalling” conditions in Abbots House and other such establishments, and provide more social housing so that the need for such accommodation is eliminated.

“We aim to show solidarity to those that are badly affected by the decision of the council and politicians that are letting those families down.” ECAP spokesperson

Speaking to CommonSpace, a spokesperson for ECAP said: “We aim to show solidarity to those that are badly affected by the decision of the council and politicians that are letting those families down. As an organisation, ECAP is interested in supporting the capacity of those affected by homelessness to organise as part of a broader coalition of groups and individuals to show solidarity, help and support each other. Giving voice and strength to the weakest.

“We believe in direct action that is ultimately a way of empowering those that don’t have power. The groups and individuals involved in the campaign are motivated by a similar approach, they want to be listened to and they know that have done nothing wrong to deserve to be treated in the way they are.

“We believe in direct action that is ultimately a way of empowering those that don’t have power.” ECAP spokesperson

“For this reason, if the council will not provide solution to the family affected the situation is going to get worse and worse. More and more families and people will be made homeless. They need our support and should not be left alone to fight this battle.

“The struggle of the E15 mothers in London provides a useful example of how the same logic of stigmatisation of homeless and their expulsion from the city is not just a casual event in the political landscape but part of a broader process, gentrification that we need to acknowledge if we want to build effective resistance.”

Council housing in Edinburgh has dropped from 58,000 in the late 1970s to under 20,000 such properties today. Asked what number of council houses or flats ECAP would like to see built, the ECAP spokesperson told CommonSpace: “What we want to see is a change in the logic of the council. More than numbers, we would like to talk about practical situation.

READ MORE: ‘We won’t back down!’: Mothers resisting homelessness in the capital expose the indignity of our housing system

“Let’s look at the so-called regeneration of areas like Greater Pilton, [which] is actually resulting in a massive privatisation of housing stock. The new 21st Century Homes development in Muirhouse/Pennywell plans for 30 per cent proper council tenancies, 50 per cent private homes for sale, and 20 per cent ‘mid-market’ rent which is unaffordable for those on benefits or low wages. This plan was rightly being opposed by groups like North Edinburgh Housing Action Group.

“We wish more groups and individuals to get involved in contesting those projects of displacement and assets stripping by the council.

“Another example is the redevelopment of the Cowgate where a luxury hotel is going to be built over a space currently used for supporting homeless in Edinburgh, the Cowgatehead Church, a well-used NHS clinic which has provided services to the most needy and vulnerable in the community for many years. This is one of the few spaces where homeless can register within a medical practice and where they can receive medical attention and care.”

Responding to the upcoming protest and the demands made by the campaign groups involved, Edinburgh City Council’s Housing and Economy Convener Councillor Gavin Barrie told CommonSpace: “Our homelessness services are facing unprecedented pressures, with demand for both permanent and temporary accommodation exceeding supply. We have appointed a cross party homelessness task force to tackle this issue and they met for the first time at the end of last year.

“A number of priorities and outcomes, including families and 16 and 17 year olds no longer being accommodated in bed and breakfast accommodation by June 2018, will be considered by councillors at the Housing and Economy Committee on 18 January.

“We are also taking action to build 10,000 affordable homes in the next five years and 20,000 over ten next ten years to assist in tackling the current chronic shortage of housing for those on low and middle incomes. These will also include social housing to alleviate pressures on this market going forward.”

The protest will take place between 10am and 11.30am on Wednesday, 17 January, at Abbots House, 10 Links Place, Edinburgh.