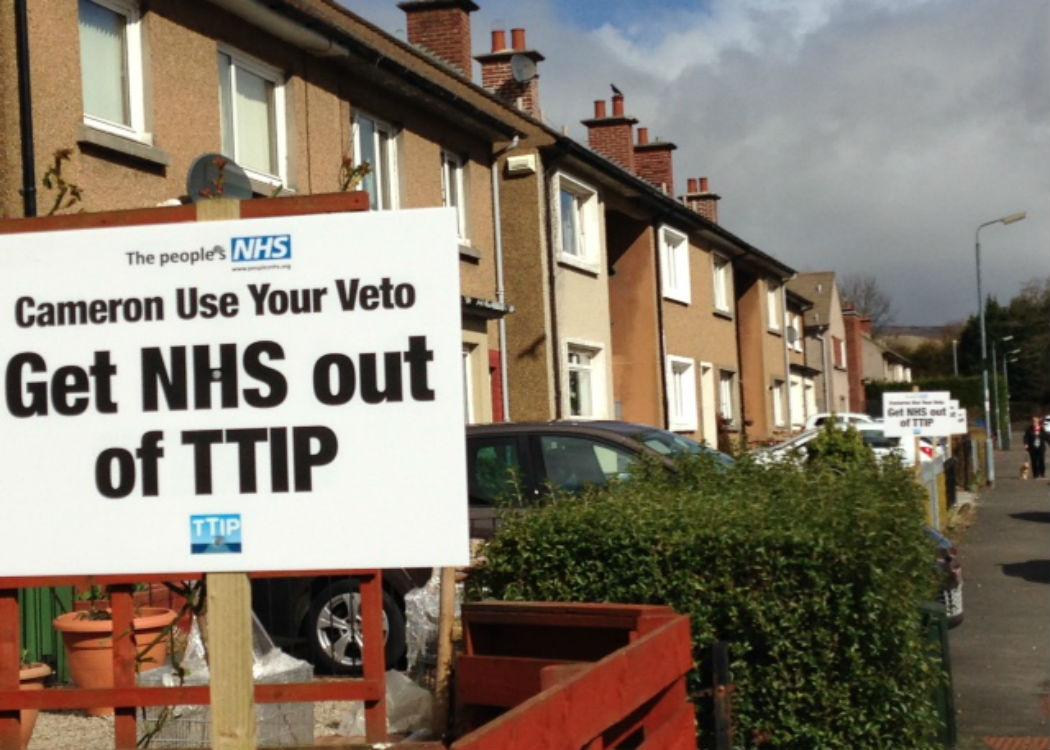 OVER 300 residents of Liberal Democrat MP Jo Swinson’s Milngavie constituency have pitched ‘Get NHS out of TTIP’ estate-agent style signs up in their front gardens to pressure their local MP over the proposed trade deal between the EU and the United States.

If the trade deal passes it will create the biggest corporate trade zone in history. Campaigners warn that public services, including the NHS, could be at the mercy of private companies if a specific veto is not implanted into the TTIP (Trans-Atlantic Trade and Investment Partnership) document.

The People’s NHS Campaign have taken their message for an NHS veto to the Scottish Parliament and received backing from all parties except the Tories and Liberal Democrats, and now want to pressure Swinson into getting on board by campaigning in her constituency just weeks before the General Election in May. Over 1,000 residents have also signed a petition calling for Swinson to keep the NHS out of TTIP.

A People’s NHS spokesperson said: “The residents of Milngavie are demanding that Jo Swinson calls on David Cameron to veto the NHS from TTIP.

“Westminster is selling-off the NHS in England and they are putting the NHS in Scotland at risk of irreversible privatisation because of TTIP.

A leaked draft “offer” from the EU to the US in the TTIP negotiations revealed a wording which appears to hinder the possibility of NHS privatisation.

In regards to health services, the leaked document states: “The EU reserves the right to adopt or maintain any measure with regard to the provision of all health services which receive public funding or state support in any form.” (Click here to read more).

However, the People’s NHS Campaign do not believe this provides a cast-iron guarantee that the NHS will stay in public hands, and have proposed a veto, written by an expert in EU law, which they want UK politicians to commit to inserting into any TTIP deal. (Click here to read more).

TTIP received a blow when a Syriza official, the major party in Greece’s new anti-austerity government, said they “will never ratify” the TTIP deal as long as they are in power.

All EU member states will have to ratify the TTIP deal once negotiations are complete. (Click here to read more).