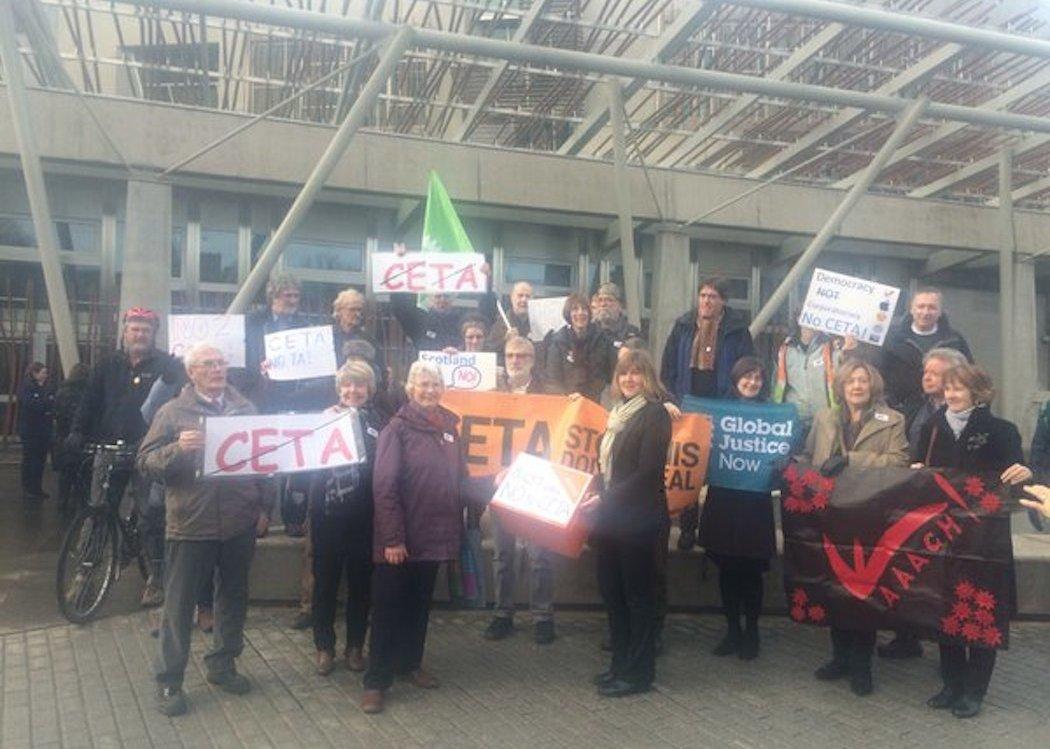 PROTESTS opposing the corporate trade deal between the UK and Canada took place outside the Scottish Parliament yesterday [Thursday 4 February] with campaigners pressuring the government to stand up against the so called ‘Comprehensive Economic and Trade Agreement’ (CETA).

The activist group, supported by Global Justice Now and several MSPs, collected support for their 8,400 strong petition against CETA , which they warn represents a threat to the NHS, job security, environmental protection and food standards.

CETA will contain the controversial Interstate Dispute Settlement (IDS) clause, which gives corporations extra rights to take governments to court if any legislation threatens their financial interests. The IDS clause was at the heart of global campaigns against the ‘Transatlantic Trade and Investment Partnership’ (TTIP), which millions of people have protested against in Europe and America.

Liz Murray, head of Scottish campaigns for social justice organisation Global Justice Now said: “CETA and TTIP are more than just trade deals. They both hand power to multinational companies on a scale not seen before and threaten the ability of government to take decisions in the interest of the public and the environment.

“Nicola Sturgeon has rightly shown that she is concerned about the system of corporate courts being proposed in TTIP, and the threat to public services, but continues to stop short of opposing it outright on the basis that the full text is still unpublished. CETA, on the other hand, has been published in its entirety and clearly contains the same things as TTIP. Our call to Nicola Sturgeon and the SNP is that they come out and oppose CETA entirely.”

The SNP faced pressure from its own members at the party’s conference to oppose TTIP in full. However, Alyn Smith MEP argued that his negotiating position in Brussels was best served by making a call at a later date.

“We’re really pleased that CETA is on the way to being known about in Scotland. Maybe we can do something in the next few months.” Jean Kemp

Many of the campaigners opposing CETA were previously involved in a delegation to Westminster in opposition to TTIP.

Jean Kemp, an activist from St Andrews against TTIP, spoke outside the parliament at the rally: “We’ve had a good morning here. Maybe not as exciting as Westminster! No one got arrested. We’ve handed in the petition.

“We’re really pleased that CETA is on the way to being known about in Scotland. Maybe we can do something in the next few months.”

In Westminster Kemp and others were challenged by armed police officers for unveiling an anti-TTIP banner in Westminster’s main hall. Kemp then tried to persuade the officer to oppose TTIP.

The group also met SNP MPs in attempts to persuade the party to fully oppose the corporate power grab .

Alison Johnstone, Lothians MSP for the Scottish Green Party, wants the government to oppose this type of corporate pact: “I’m absolutely delighted to see people outside parliament campaigning against international trade deals that will have a negative impact on workers right, on animal welfare… These are all about putting corporations before communities, putting profit before people. It’s high time these campaigners were listened to.”

“It’ll do nothing but undermine the health and safety standards that people have fought for for so long. It really is an important issue and something we should give maximum attention to,” Johnstone added.

Those in favour of CETA argue that large corporations generate wealth and jobs in a globalised economy. However, opponents point to skyrocketing levels of global inequality as evidence that market forces are not a sustainable or just form of economic development.