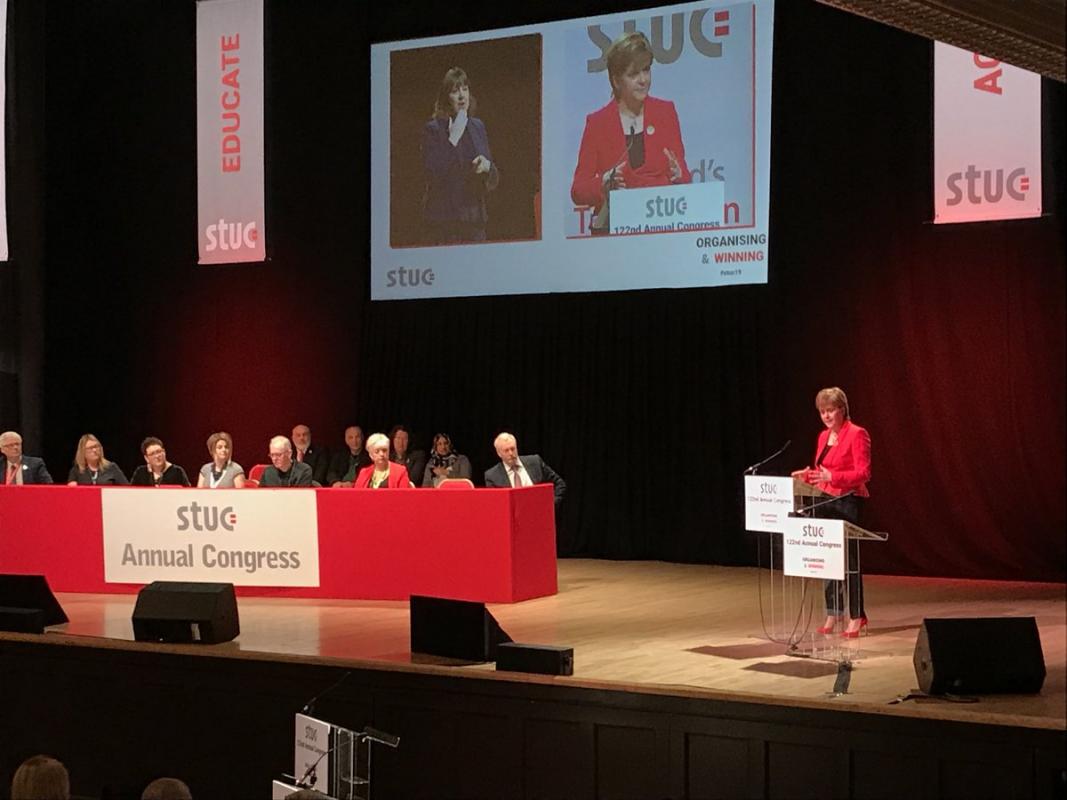 Nicola Sturgeon’s phrase echoes radical plans being developed on the left of the US democrats, including the popular policy advocacy for a Green New Deal by congresswoman Alexandria Ocasio-Cortez

CAMPAIGNERS have called on First Minister Nicola Sturgeon to apply radical proposals to match her pledge to Scottish trade unionists for a “Scottish Green Deal”.

Sturgeon deployed the phrase during her speech to the Scottish Trade Union Congress (STUC) in Dundee today (17 April).

She said that the party’s policy to establish a National Investment Bank would be key to a “transition” to a carbon neutral Scotland that would also provide considerable employment opportunities.

The phrase and policy vision mirrors ideas around a “Green New Deal” in the United States, which has the backing of high profile advocates like Congresswoman Alexandria Ocasio-Cortez, who has called for a major co-ordinated mobilisation of state resources to bring about a carbon neutral economy in a way that would also guarantee work, housing, health care, public transport and improved living standards.

In her speech to the congress in Dundee’s Caird Hall she said: “A key mission of the new National Investment Bank will be to support the transition to a carbon neutral society – a Scottish Green Deal. That transition provides huge opportunities for Scotland.

“We need to ensure that the carbon neutral age doesn’t just make Scotland a greener nation – although it will. It must also make us a healthier, wealthier and fairer nation.”

Modern Monetary Theory Scotland, a group established earlier this year to advance the school of economic thought which has heavily influenced ideas around a Green New Deal in the US, responded to Sturgeon’s speech by saying that such a radical approach was not compatible with “free market priorities”.

A spokesperson said: “MMT Scotland is happy that the First Minister is committed to creating a Scottish Green New Deal, although reserves full judgement until specific details are laid out. In order to reduce inequality and greenhouse gas emissions Scotland must be prepared to change its consumption and productive patterns in the long term.

“Free market priorities have allowed large unfettered firms to build up wealth without serious consideration for the negative effects on the environment and human biology.”

MMT Scotland has also warned that after independence, Scotland would need full control of a central bank and monetary policy in order to mobilise the state in the way envisioned by the Green New Deal, something critics of the SNP Growth Commission report say would be impossible under its plans for an independent Scotland to continue using Sterling after independence.

“The best way for Scotland to reach its full green potential is to reap the benefits of a new Scottish currency and introduce a voluntary Job Guarantee programme. Having monetary flexibility and green jobs is absolutely vital to building a successful independent Scotland.”

Craig Dalzell, head of policy and research at the Common Weal pro-independence website, which also backs a Green New Deal, said: “The announcement today from the First Minister for support for a Scottish Green Deal is noteworthy and exciting but it must be backed up with a solid and credible plan for delivery – there is no time left for dithering, delay or empty rhetoric when it comes to preventing the worst effects of climate change.

“Common Weal will very soon be publishing a landmark paper on what an investment-driven economy would look like. These principles should be firmly bedded into the Scottish Green Deal.”

The calls for “transition” from Sturgeon prompted criticism from the Scottish Greens, who have repeatedly clashed with the Scottish Government over the urgency of new legislation to tackle carbon emissions in Scotland.

The Scottish Government  has proposed a Climate Change Bill for carbon neutrality by 2050, whereas the Greens are demanding net zero emissions by 2040 and emission cuts by three quarters by 2030.

Scottish Greens Parliamentary Co-leader Patrick Harvie MSP said: “As usual the First Minister talks a good game on climate, but her actions tell a different story. She wasn’t even willing to back the Green proposition to declare a climate emergency last month, preferring to keep backing the fossil fuel industry.

“It’s clear only the Greens are willing to take the necessary action to tackle the climate crisis, and create hundreds of thousands of jobs in the process with a Green New Deal. Next week we’ll bring that proposal to the vote in Parliament, and challenge the Scottish Government to make the radical changes that are needed.”

In her speech, Sturgeon also said she shared the trade union movements opposition to inequality and racism.

She said:”Scotland wants no part of Theresa May’s despicable hostile environment. We reject the dog whistle xenophobia that is too prevalent in political discourse. And we stand firm and united against the rise of the far right.”

She celebrated the achievements of the 8000 women workers whose strike action in 2018 against Glasgow City Council finally won over £500 million pay outs after over a decade of continuous campaigning.

“I want to pay tribute to the courage, determination and persistence of women council workers in my home city of Glasgow. I’m delighted their cases have now been settled. They exemplify the fact that if you organise against injustice, you can win.

“Let’s be blunt – the gender pay gap cannot continue to be something we talk about for decades. It is the duty of this generation to end it.”

Sturgeon also warned delegates to the STUC that the Conservative party’s promises not to attack workers’ rights following Brexit should not be trusted.

She said: “The UK Government has said that it won’t use Brexit to reduce workers’ rights – but when it comes to workers’ rights, I wouldn’t trust the Tories as far as I could throw them.

“Some MPs have been open about wanting to slash regulation. The Tory approach would be disastrous. It would damage the health, welfare and security of workers – and it would harm the productivity of the economy as a whole.

“It would also be anathema to the vision for Scotland which all of us share.”

Sturgeon reaffirmed to the congress her own support for a second referendum on the UK’s EU membership.

The First Minister’s Green New Deal remarks came shortly after the STUC published a report on the “broken promises” of successive Scottish governments to follow through on new green job targets, calling for an industrial policy prioritising public investment and domestic ownership of industry to reverse the trend.