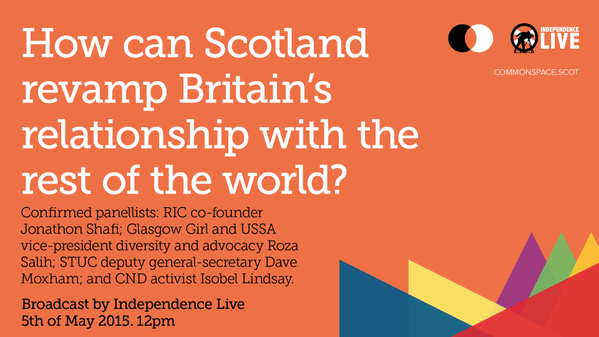 POLITICAL activism and progressive ideas will change the debate on foreign policy and may yet change Britain’s policy on war, weapons and migration, according to panelists debating the General Election today in Glasgow.

Trade union and campaign representatives shared a realistic yet optimistic view on the influence of MPs from Scotland and progressive groups across the UK holding the balance of power in a hung parliament.

Issues discussed included the future of Trident nuclear weapons, the decline of Britain’s role in the world, migration and asylum rights, and international solidarity.

Isobel Lindsay, from the Campaign for Nuclear Disarmament, summed up the strange position where pro-independence MPs could influence foreign policy across the whole UK: “We never planned for this scenario, mainly because we never expected to be in it… it’s a very interesting new dynamic.”

The panelists – including Dave Moxham from the Scottish Trades Union Congress, Roza Salih from Strathclyde University student union and Jonathon Shafi from Radical Independence – all agreed that there were openings to change foreign policy after the election, but that change would take time.

The Trident nuclear weapons system based on the Clyde – set for a renewal in 2016 – has continued to play a central role in political debate.

Lindsay and others were optimistic that the debate will change surrounding nuclear weapons, although a Tory-Labour majority still support weapons. Lindsay added “We might be able to manoeuvre a delay [of renewal], which would at least be useful.”

Shafi was keen to emphasise that Trident is a symbol for the wider problem with British foreign policy.

“It’s not just about getting rid of nuclear weapons it’s about a change in world view about how the world is run,” he said.

Shafi added that foreign policy “filters through the entire context of the [national] debate” with voters disillusioned “most starkly over the Iraq war. They felt they weren’t being listened to. They felt this war a war for oil.”

Moxham agreed that foreign policy “has played a role with disaffection with Labour even 12 years after those events”.

However, Miliband and the SNP have both signalled a desire to change the approach to war.

Moxham added: “There was the vote against intervention in Syria. It was an important moment. There are some sparks of hope that we should be looking to build on. The Scottish representatives can play a crucial role in that.”

On migration Roza Salih, who led the ‘Glasgow Girls’ campaign against asylum seeker dawn raids, called for Scottish MPs to change the debate to consider the human rights of those seek asylum.

She welcomed the commitment of the Scottish Government to close Dungavel detention centre. However, others said it would be a challenge for the Scottish National Party to place this issue high up the agenda.

An increase in SNP seats would change the debate at Westminster – opening up more progressive foreign policy options. However the panelists remained sceptical over whether the two largest parties will select those options and change Britain’s role in the world for the better.