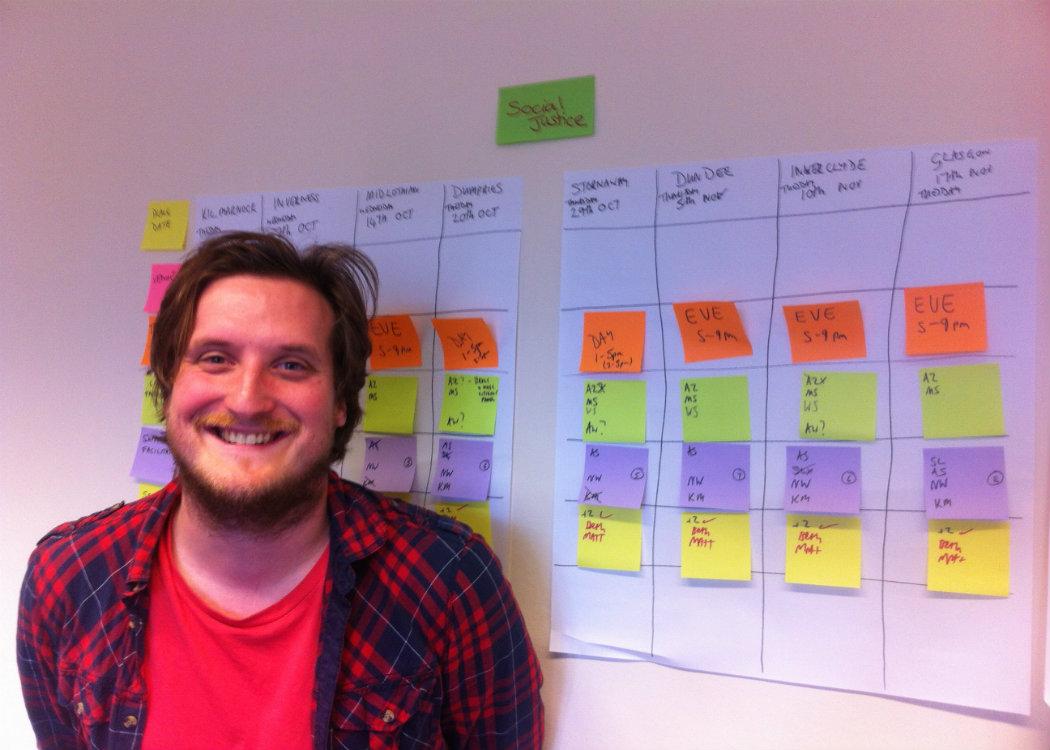 CAN MEMBERS of the public influence the government? Outside of election season, the lines between what the public wants and what government delivers can become blurred.

It’s that challenge – involving a broad range of people in making decisions – that The Democratic Society exists to confront. Founded as a not for profit group, the society works with governments to improve participation and transparency.

Across those eight weeks the group will be leading a ‘Fairer Scotland’ public consultation to help construct the Scottish Government’s social justice agenda.

“They wanted to have a co-created action plan for social justice to see what it would take to create a socially just Scotland in 15 year time,” Stoddart explains.

“Originally if you wanted to do that you would go to your stakeholders – talk to the charities and different organisations. That’s what they wanted to do. We said ‘How about you work with those organisation to create an engagement process than can involve a lot more people and people who really need their voices heard on this issue?’

“We’ve started that. Alongside the Scottish Community Development Centre and the Electoral Reform Society, we are organising planning events for people across the country to prioritise ideas for the action plan.

“Then there will be a three day citizens forum in Edinburgh in December to bring people from across Scotland together to work with policy makers and politicians to create the final content.

“If that happens then that’s really positive in term of trying out participative democracy.”

It’s part of the slow burning process of academic democratisation in Scotland. The Democratic Society, alongside other campaign groups and researchers, have been prodding at the Scottish Government, eager for its rhetorical celebration of empowerment to be fully reflected in action.

The current administration in Holyrood has a mixed record. The Community Empowerment and Land Reform Bills seek to empower community groups. Commissions on the council tax and local democracy seek to challenge the centralisation and apathy surrounding many council authorities, although with limited success so far.

The recent miserable by-election turnouts and consultation malaise over issues such as fracking show that there is no quick fix for Scottish democracy.

“I feel that the Scottish Government are trying to experiment in these areas and we’re helping them to do that. Participatory democracy is not just a tick box exercise of old. It’s a transformation,” Stoddart argues.

“It’s an alternative to having a consultation document that dares you to disagree with a policy and then, when everyone disagrees with it, the government just go ahead with the policy anyway.

“Rather than government having power over people, it’s about the government sharing power with people. If they learn from the process we’re going through at the moment, I think that will become a normal state of affairs.”

The referendum experience – “a catalyst” for this type of thinking according to the society – had led to numerous projects seeking to broaden who takes part in politics.

The Electoral Reform Society led ‘Democracy Max’ sessions to encourage members of the public to engage with the debate. Thousands of public and campaign meetings took place. The Scottish Government even took inspiration from the constitutional conventions of Iceland and Ireland – which were led by citizens groups – when considering how a Scottish written constitution would be constructed.

While that process was celebrated for enlivening political debate, change since the referendum has been harder to quantify.

The Smith Commission process on further devolution was criticised for failing to engage the public in its discussions and its recommendations.

Dominated exclusively by the major political parties, the commission received so many submissions (over 18,000) that they couldn’t even be read in time – even if they had wanted to. The majority of submissions ( 72 per cent ) who supported maximum devolution were overruled by the report’s authors.

Stoddart agrees that the process could have been handled better: “The lesson from that is in order to have proper participation, government and organisations need to give it the relevant amount of time. As participation becomes more normalised it will become less like asking for a process to take place yesterday and more built into the fabric into how we do government.”

That problem is not isolated to constitutional politics.

At a local level Scotland has some of the most centralised councils in Western Europe. In 2012 less that 40 per cent of the electorate bother to vote for their councillors.

Similarly, the council tax – the rejigged version of the disastrous Poll Tax – has been frozen by the Scottish Government amid cuts in services. Previous attempts to replace the tax for a fairer alternative failed to receive the support of parliament.

Both issues have been reviewed by government commissions, and are expected to be central issues in next May’s Scottish elections.

The Democratic Society is involved in both processes, and is speaking to 20 of Scotland’s 32 council authorities about expanding community budgeting.

The ‘Leith Decides’ project, which involved 1,600 local residents deciding how to spend PS22,000 of council grants, is heralded as a successful protoype.

In Argyll and Bute demonstrations over the sale of Castle Toward Estate led to a convention on reforming local democracy. But action, so far, has been disparate and has not yet broken through in the same way that the referendum became a focal point for political change.

“I suppose people’s attention has been drawn to look to the top of the tree rather than further down,” adds Alistair.

“The irony is that a lot of decisions that affect people’s lives are at a council level. I think there is a need for a focus on council reform and moving away from treating people like consumers of council services towards having citizens involved in things that happen in local areas.

“Community councils, also, need a lot of reform. They have few resources and little power. They can help councils to keep councils in touch with what people are thinking.”

But local government reform – like all political campaigns – can be a slow burning process, built over many years by activists, campaign groups and academics.

The fruits of Scotland’s Summer of democracy remain to be seen, but The Democratic Society are hopeful that a permanent change in the country’s politics is just beginning to take shape.

Picture courtesy of University of Stirling, Save Castle Toward Campaign