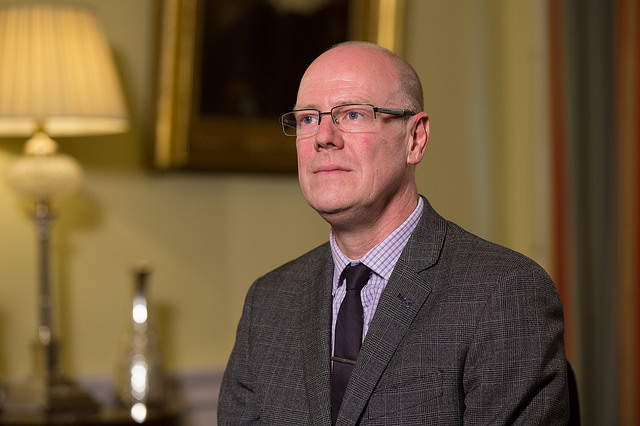 Housing minister Kevin Stewart warns that homelessness is predicted to rise due to UK Government welfare cuts, despite efforts to mitigate their impact

THE SCOTTISH GOVERNMENT has pledged £21m of a £50m fund in order to offer faster, greater support to rapidly rehouse those at risk of homelessness, or who are living in temporary accommodation.

Confirming the details of the investment in Holyrood today [27 June], housing minister Kevin Stewart declared: “Can we end homelessness in Scotland? Aye, we can.”

The announcement does not constitute new funding, as such; as part of the £50m Ending Homeless Together Fund, coupled with a health funding contribution of £1.5m over the first two years, the £21m is a new allocation of an existing spending commitment, and will be used by local authorities and homelessness organisations to facilitate their transition to a policy of rapid rehousing and ‘Housing First’.

Housing First, recommended by cross-party committee report published earlier this year, is based on a model used in Finland, the only nation in Europe where homelessness is currently in decline, and is based around the principle that each individual has an unconditional right to a permanent home. Under Housing First, those suffering from homelessness with multiple complex needs can avoid the bureaucracy involved in temporary accommodation and be placed in a permanent home.

Also released today were the latest recommendations from the Homelessness and Rough Sleeping Action Group, which have been accepted in principle by the Scottish Government.

However, charities and homelessness campaigners have previously called on the Scottish Government to commit a greater amount of £50m fund to immediate investment, following indications that the Scottish Government would be spent over five years. In May this year, MSPs on Holyrood’s petitions committee heard arguments in favour of £40million of the Ending Homelessness Together funds being spent this year.

The new funding allocation was first confirmed by Stewart while visiting the City of Edinburgh Council’s homelessness service staff, with the Minister commenting: “Our significant £21m investment will include up to £4m to support local authorities in the five cities participating in the joint Social Bite and Corra Housing First initiative.

“This funding will ensure we support people at times of crisis, while also taking an important step towards transforming the system and offering rapid routes back to settled housing.”

However, when speaking before parliament today, Stewart warned that UK Government policy would likely see homelessness rise in the near term.

He said: “All this of course is being done in the face of the UK Government’s programme of welfare changes, which is making life harder for so many people across our country. By the end of this decade, an annual £4 billion of benefit cuts will come out of Scotland, pushing people into debt, rent arrears, the use of food banks, and will push more folk into crisis.

“And while we are spending a record £125m this year on welfare mitigation to protect those on low incomes – much of which is mitigating the awful bedroom tax – we need to be vigilant about these situations. We know from reports such as the National Audit Office and Crisis reports, to name a few, have pointed to the devastating impact that these welfare cuts are having, leading to more homelessness, and that is predicted to rise, despite our efforts to mitigate the impact.”

“While we are spending a record £125m this year on welfare mitigation to protect those on low incomes – much of which is mitigating the awful Bedroom Tax.” Housing minister Kevin Stewart

In light of these realities, Stewart continued, it was vital that the Scottish Government continued to work closely with local authorities.

Jon Sparkes, chair of the Homelessness & Rough Sleeping Action Group and chief executive of national homelessness charity Crisis, added: “Everybody in Scotland deserves the dignity and stability of a safe and stable place to live, so we are very pleased the Scottish Government has accepted our recommendations to tackle homelessness across the country.

“Right now far too many people are either at risk of becoming homeless, or are already stuck in temporary accommodation or sleeping on the streets. When we know what it takes to end homelessness, this just isn’t right.

“We welcome the government’s pledge of vital funds to house people more quickly, and to provide the crucial support they need to leave homelessness behind for good. In addition, we have called for public bodies – such as hospitals, prisons, and social care services – to play a role in preventing homelessness, and for the government, local authorities and social landlords to build the social housing we need to truly meet demand.

“Now is the time for action, and we look forward to working closely with the Scottish government to make these plans a reality so that ultimately, homelessness in Scotland can be ended once and for all.”

“Swift action is now required to make sure the funding helps those who need it most as soon as possible to end the misery of lives lived in limbo while waiting for a home.”

Brown nevertheless went on to call for further progress in combating the Scottish housing crisis: “At the heart of the problem is a shortage of housing. We need to see a major increase in the supply of good quality, affordable and emergency housing in Scotland to help ensure homeless people can be housed immediately and their wait for a permanent home is as short as possible.

“Our homelessness legislation is meant to provide a permanent home for homeless people, but all too often we hear of people being denied that right. That unlawful practice must stop!”

Figures released earlier this month showed that a total of 28,792 families in Scotland have been confirmed as homeless over the course of the year – an average of one every 18 minutes – while the amount of people in temporary accommodation has increased by one per cent over the same period.